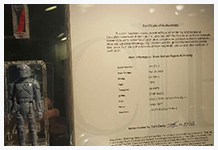 A pretty comprehensive article on the thefts by Carl Cunningham came out today.

An update on my stolen Rocket-Firing Boba Fett prototype.

First, I'd like to sincerely give thanks to the massive amount of people, sites, forums, Facebook groups, etc, that helped get the word out.

In my early conversations with the police they advised doing this is the most important thing to do when something like this is stolen.

Because of the ongoing investigation of this, I can't say very much about it other than known facts.

I do have my Fett back in my possession.

A very honest person did see the news on the theft and he contacted me, even though it was a great financial risk to him as he had purchased it, but did not have possession of it yet.

To my very great shock, he purchased it from a trusted friend of mine, somebody known to many others in our community.

He admitted the theft, and returned it to me.

An arrest warrant was issued for Carl Cunningham in California and he has appeared and posted bail. It's a very serious grand theft felony arrest.

The list of items taken by him he admits to includes a number of valuable unopened Master Replicas items from me, and at this point, it is unknown if there are more items he will admit to, or if he will admit to all of them. If you purchased something from Carl in the last two years, I'd appreciate your contacting me about it.

I'm posting this now because the number of people who know about this is growing with time and the investigation, and it's a problem not having the truth out there to everybody.

I've just discovered my prototype Rocket Firing Boba Fett pictured above was stolen from the Star Wars museum at my workshop in Texas. It was sealed in an AFA case with rocket and certification. The photo above was taken by a guest in the last two weeks so the theft is recent. Detailed photos of the loose Fett are on our classic Kenner Boba Fett photo archive page. Needless to say, if anybody should hear anything about a Boba Fett like this floating around, please contact me.
SEND