TROS Home Edition Buyers Guide
Posted by Jeremy on February 22, 2020 at 03:53 PM CST
With the news that the final chapter in the Skywalker Saga - The Rise of Skywalker - is getting its home entertainment release in digital (March 17th) and physical DVD, Blu-ray, 3D and 4K UHD (March 3st) formats, retailers are spreading the word on their exclusives and getting ready to take your orders.

All multi-screen formats will include a digital release of The Rise of Skywalker with either the DVD, Blu-Ray, 3D Blu-Ray or 4K UHD version of the movie to enjoy. Digital purchases will receive the exclusive bonus feature The Maestros Finale and all home releases will come with the following bonus features:


On general release is the Blu-Ray/digital code (MSRP $24.99) and 4K Ultra (MSRP $29.99) which comes as-is and has no additional bonus features, exclusive content or pack-ins. These will be available on March 31st from all retailers, including those below.


For the viewer who wants a more immersive experience there are a variety of options and retailer to choose from, and here to help you is this handy guide to what's on offer. 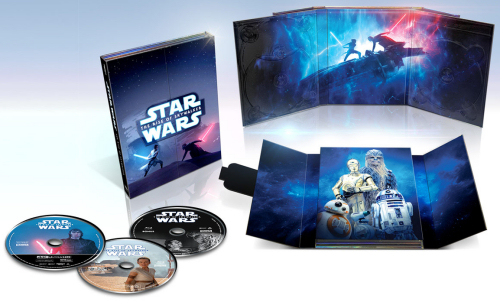 Featuring a tri-fold cover adorned with artwork that is unique to this retailer, this three-disc set includes the Blu-Ray and a 4K UHD copy of The Rise of Skywalker as well as the standard bonus footage for $34.96. Order today and receive it by April 3rd.

Also available from Walmart is a region-free 3D Blu-Ray edition, imported from the UK, that also has a second disc of 2D bonus footage. With a price tag of $44.99 and a delayed delivery daye of May 2nd, only hardcore fans who have invested in this technology are likely tobe interested in this edition. 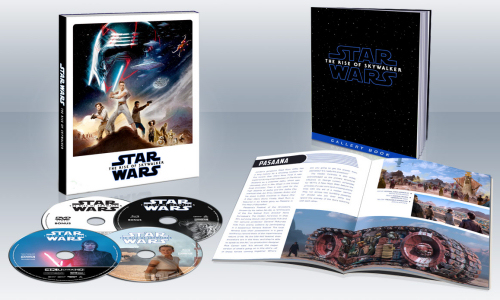 This four-disc set will include a standard Blu-Ray and a 4K UHD cut of the movie, the previously mentioned bonus footage and an exclusive Filmmaker Gallery Book that includes concept art and material drawn from a number of licensed source, including DK's The Rise of Skywalker Visual Dictionary, and covers character development, costume and creature design as well as details about the making of the ninth Star Wars movie. Priced $34.99, this Target exclusive will ship by March 31st and RedCard holders get free shipping. 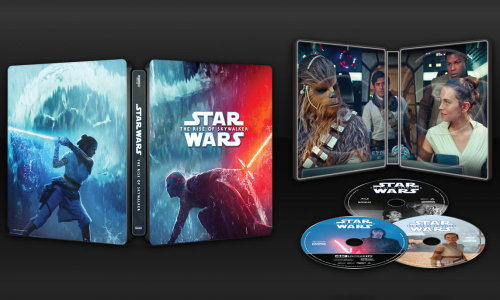 Some retailers get exclusive artwork and others include additional content, Best Buy offers a different case material with their 4K UHD Blu-ray & Blu-ray steelbook version. The outside has wrap around artwork and the interior has a print of the crew and cockpit of the Millennium Falcon. Having already sold out once it is back in stock and available from March 31st for $34.99. 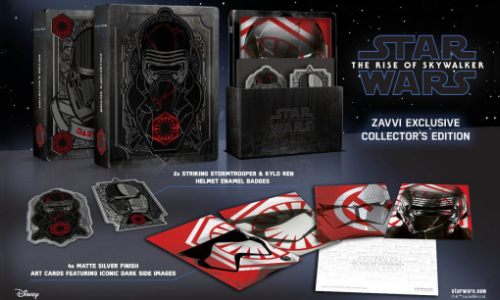 Perhaps the most impressive home release version of The Rise of Skywalker, overseas retailer Zavvi has an exclusive collector's edition steelbook with a bundle of special features. Packaged in a metal slipcase that has an embossed artwork on it, a steelbook contains either 2D/3D Blu-Ray or 4K UHD version of the movie and comes with two enamel badges and four art prints. This upper end collectible, which is only available through Zavvi UK and Zavvi AU, is limited to 2,000 units wordwide.

Sadly none of the current versions of The Rise of Skywalker home release mention an audio commentary by crew or cast, and nothing has been said about deleted scenes being included in the bonus material, so we probably won't be learning more about Dominic Monaghan's character or any of the expanded material in the upcoming movie novelisation, which is also due on on March 17th.

Help to support Rebelscum's ongoing struggle to continue bringing you the latest Star Wars collecting news by making your The Rise of Skywalker home entertainment purchase using one of the affiliate links provided.
SEND