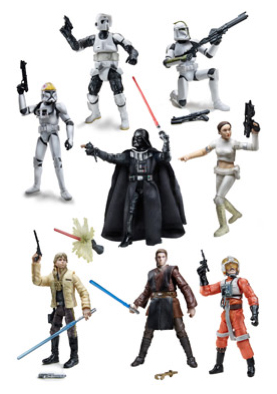 as we all know, the first wave in the 3 3/4-inch Black Series will include Padme Amidala (Geonosis Arena), Clone Trooper Sergeant (Phase I), Anakin Skywalker (Jedi Hero), Biggs Darklight (Rebel Pilot), Luke Skywalker (Yavin Ceremony), Darth Vader (Bespin Trap), Biker Scout (Speeder Bike Pilot) and Clone Pilot, but what we didn't know until now was what you will find when you open the case. Here's the breakdown:


You'll notice that the breakdown state that the Clone Pilot is '(Episode III)' when we clearly know it is a Phase I '(Episode II)' pilot. The question is, are we looking at a list error or a possible packaging error, which could lead to a package variation. Time will tell... 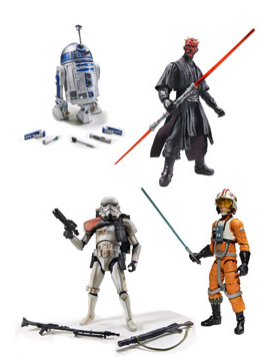 At first we were told that the case assortment for this collection would weigh heavier on Original Trilogy characters, but the list we've seen states that all four figures will be evenly packed:

What is interesting about this list is the need to identify Darth Maul as '(Episode I)' while the R2-D2 and Sandtrooper are listed without film designations. Sure, we all know the Sandtroopers were only in one film, but at the same time we also know that Maul was only in one film. Does this mean we'll see a robot legged Maul based on his Clone Wars appearance? Considering the R2 also doesn't have the film designation, does that mean we won't see a Bar2-D2 or a flying R2? 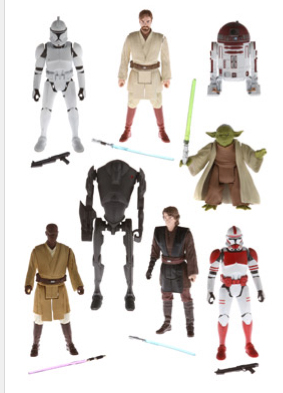 This year's Saga Legends collection with limited articulation may not be what modern collectors were expecting, but Classic Kenner articulation for 1995 The Power Of The Force prices and accurate silhouettes? Sign us up! As you know, the line will kick off with a focus on Attack Of The Clones and Revenge Of The Sith, and we've already seen them in our Toy Fair coverage, but this is what you can expect to see when the first wave hits:


Is it just us being all misty-eyed about the five points of articulation used on Classic Kenner line, or would it be super cool for Hasbro to release these on The Vintage Collection card backs? Even as a special mail away or event exclusive, you can count on some of us going ape s*** over that idea! (Yes Hasbro, consider that a bug in your ear) 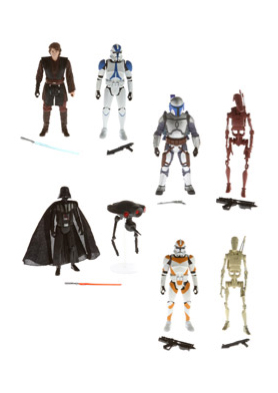 The two packs give us more affordable figures with limited articulation and accurate silhouettes, but which will be harder to find? We'll if you are there when they are readily available, you'll be happy to know that the case breakdown gives all four inaugural sets equal chances of winning you over:

No Bothans were killed to bring us this information.
SEND