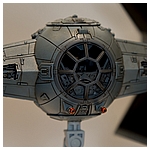 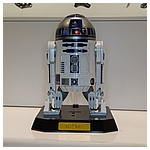 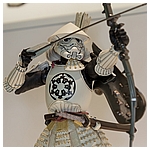 Toy Fair 2017: Bluefin Distribution - Tamashii Nations & Bandai Hobby
Posted by Chris on February 17, 2017 at 09:03 PM CST
Bluefin Distribution was gracious enough to give us an early look at their booth while they were setting things up. Here's a run down of what we saw:

- Tamashii Nations, celebrating their 10th anniversary this year, had their fantastic Meisho Movie Realization action figure line on hand in the form of some pretty terrific dioramas. The back of the display featured artwork of what we can expect to see in this line in the coming future.

- You'll finally be able to display your C-3PO Perfect Model Chogokin figure from 2013 with his diminutive counterpart! An incredibly detailed die cast R2-D2 will be heading our way late summer or early fall this year. R2 features all the articulation you'd expect, lights, a movie-accurate dome, panels that open, a retractable third leg, and, most interestingly, (removable) "tubes" that Kenny Baker used for his legs. We don't believe we've seen this before in an R2 collectible - it's a nice touch that demonstrates a deep commitment to detail.

- Finally, they unveiled their new Star Wars Plastic Model Series, which will see a variety of ships from across the movies. These are snap-together models with no glue required, allowing builders to focus on paint and weathering. The models featured molded bases, many of them Death Star surface tiles (the 1/72 scale A-Wing even comes with a Death Star turbo laser tile). In fact, we can eventually expect to see DS tiles sold separately, which will really enhance the display possibilities. The details on these are really impressive.
SEND