UK News: UCS Falcon Boosted
Posted by Jeremy on November 27, 2017 at 09:08 PM CST
Sometime between September 20 and 4.30pm on November 26 a fellow LEGO Star Wars fan had his prized - and sealed - UCS Millennium Falcon opened and all the parts swapped out!

As crazy as that sounds thieves are alleged to have replaced all the elements of the set, worth £650 on LEGO.com, with "other items" and left the box undamaged.

The crime, which took place in Newton Abbot in Devon, was reported on November 26th to the Devon & Cornwall Police constabulary, but the last time the owner knew the Millennium Falcon Star Wars set was intact was on September 20, just after it was purchased. 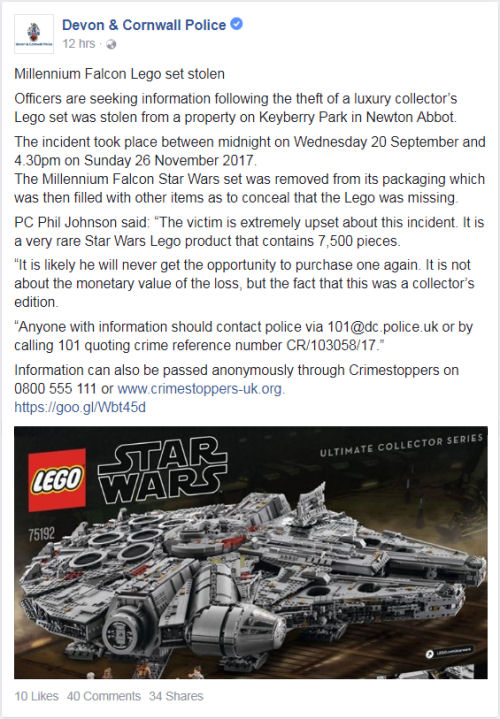 Commenting on the cost and lack of availability of the set, PC Phil Johnson stated It is likely he will never get the opportunity to purchase one again. It is not about the monetary value of the loss, but the fact that this was a collectors edition."

Anyone with information should contact police via 101@dc.police.uk or by calling 101 quoting crime reference number CR/103058/17.
SEND