Blocks Magazine: Issue 40 Out Now
Posted by Jeremy on January 18, 2018 at 12:55 AM CST
She may not look like much, but shes got it where it counts. Blocks finds out just how much the LEGO Star Wars Ultimate Collector Series Millennium Falcon lives up to Han Solos promises, taking an in-depth look at the sell-out set. Daniel Konstanski then takes a look at what kind of special modifications can be made to add an interior to this amazing set, starting off with how to incorporate the crew quarters. 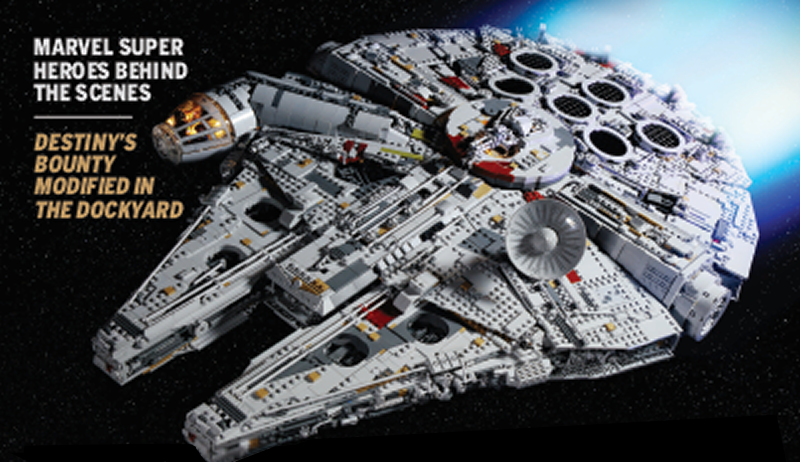 Going behind the scenes, this month sees TT Games Head of Design, Arthur Parsons, reveal secrets behind the making of LEGO Marvel Super Heroes 2 in an exclusive interview. A trip to Enfield is also in order, as the LEGO Group holds the first ever Fan Media meet and greet at the companys US headquarters.

Blocks checks out the work of Bricksy, the photographer who has recreated famous pieces by Banksy with LEGO bricks to find out what inspires his unique art. In Technique, the challenge of creating optical illusions with this 3D medium gets a deep dive, showcasing a unique type of build for LEGO fans to try.

Joker Manor, another of the mega-sized LEGO sets recently released, also gets the Blocks review treatment. In other Batman related antics, Mike Freeman talks readers through his Steampunk Bat Mech. The LEGO NINJAGO Movie gets a look in too, as Destinys Bounty is completely dismantled to be rebuilt as a modular building.

The regulars are all present too  from Month in LEGO to Brick Wife, from This LEGO Life to Brickpicker. Steel City LUG gets profiled in LUG Spotlight, the Teddy Bear shows up in Piece Perception and Game of Thrones appears in MOC&A.

Instead of risking bumping into all manner of scum and villainy en route to Docking Bay 94, get Blocks magazine delivered to your door, where it will arrive before it is even on store shelves. Visit www.blocksmag.com to find out more about subscription deals.