DK: Books With Bricks
Posted by Jeremy on July 23, 2019 at 11:04 PM CST
LEGO has always been a big proponent of child development through play and learning, and what better way is there to improve problem-solving abilities, patience and co-ordination while encouraging kids to better their reading skills than a series of LEGO sets tucked into a book? 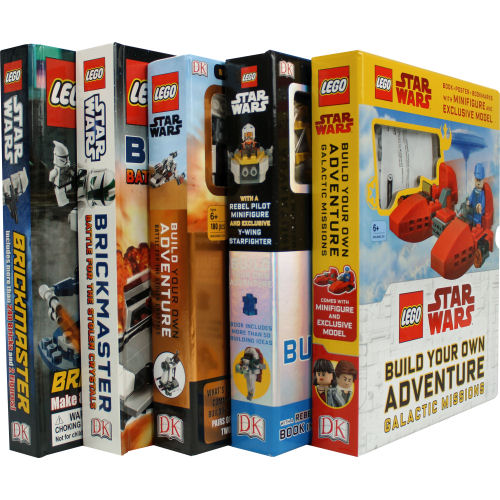 While a regular, off-the-toystore-shelf ticks most of the developmental requirements that parents look for when choosing learning toys for their children it does miss out on one area of education that its always good to get an early start in - reading. Through their partnerships with a number of publishers like DK, Scholastic and Ameet, LEGO have been able to fill the learning gap that their construction toys couldnt until DK came up with the bright idea of combining books with bricks.

Combining dynamic full-colour photos with clearly labelled instructions, trivia, and catchy storylines to help drive creativity and play, the first Brickmaster came out in 2009 and focussed on the Castle theme. Setting the trend for those to follow, it featured a collection of parts, two minifigures, and building instructions for several models. Despite the similarity in the names, these books are not related to the Brickmaster magazine series produced by LEGO. 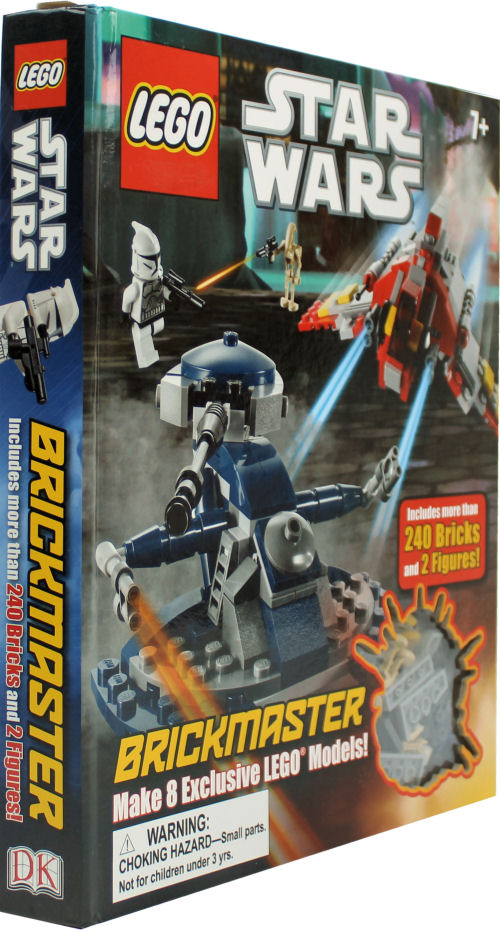 Originally released in 2010 with an RRP of $29.99, this co-branded collaboration between LEGO and DK offered a series of stories that involved building canon and Star Wars-inspired vehicles from the 240 bricks and two LEGO minifigures included.

Each of the four stories is a short paragraph that largely revolves around simple chase stories and leads into the build. While the books recommended age range extends to 17 years old, the contained reading material isn't going to tax anyone older than 7.

The book's opening two builds are the cover-featured midiscale Trade Federation AAT and Republic Attack Shuttle, which are the only ones based on 'real' Star Wars vehicles. The rest do have an appropriate theme to them and the designers who figured out a way to use a prescribed and limited number of bricks to make six more Star Wars models did an admirable job.

Since this book dropped off bookstore shelves the secondary market is its only source, where used copies can be picked up for around $20 on eBay.com and Amazon.com for $10 (used) or $40 (new). 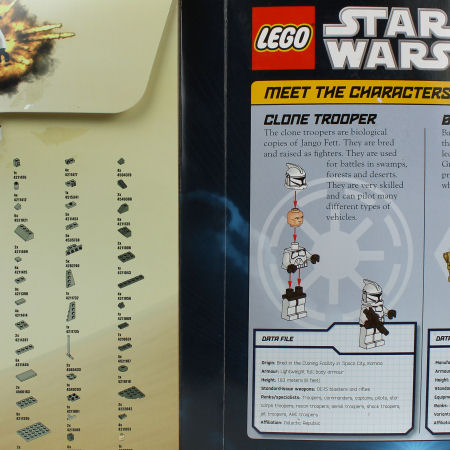 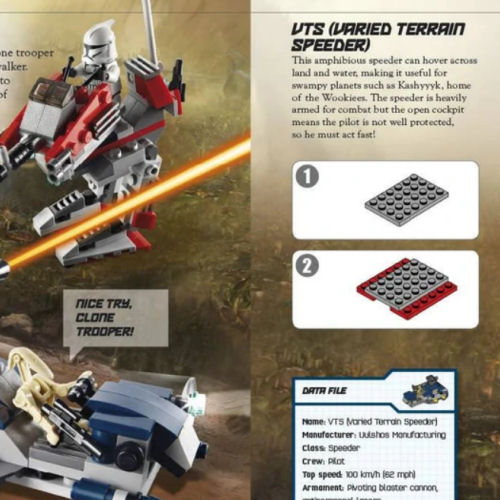 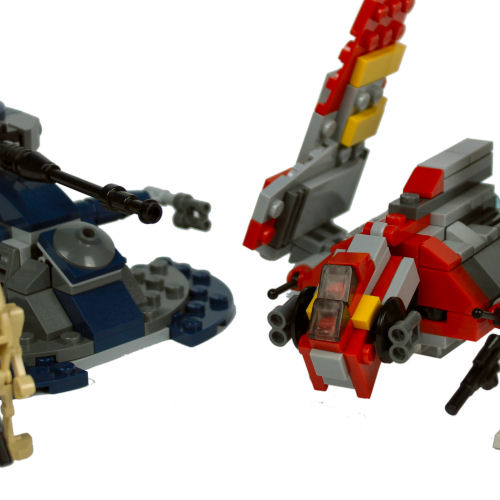 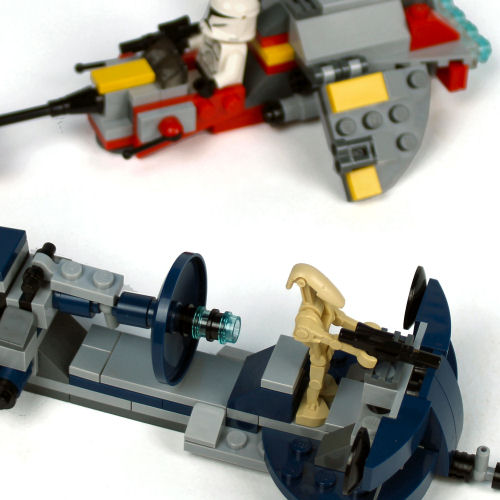 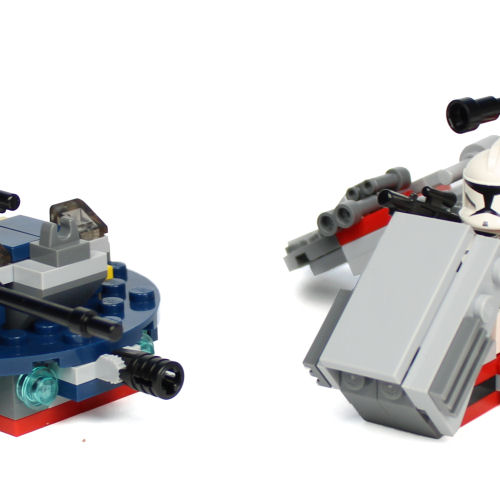 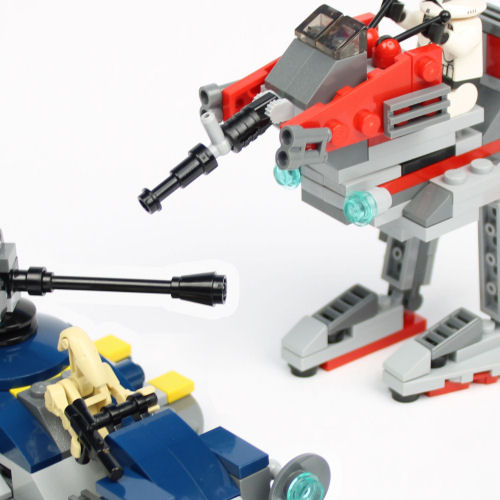 Following on in the same style as the other Brickmaster titles, the 2013 publication of the second LEGO Star Wars Brickmaster book, titled Battle for the Stolen Crystals, boasted two minifigures, 180 bricks (which was 60 less than the previous book) and instructions for eight builds. 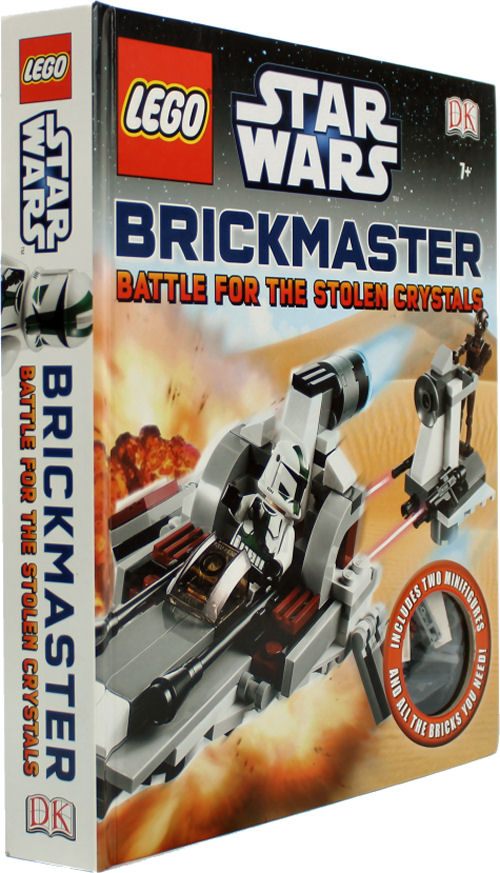 With a 10% increase in price and a 30% drop in bricks, DK made up the shortfall with an extra 24 pages of storytelling that sees a stolen shipment of un-named lightsabre crystals being retrieved. The stories are continuous and told in chapters that involve making each of the eight small sets, each of which neatly slot into the story arc.

Saving the cover-featured builds for the third story, the first builds are (like the first LEGO Star Wars Brickmaster installment) Star Wars canon - a V-19 Torrent and a Separtist Cannon that, though not specifically named an Umbaran MHC looks just like one. The remaining six builds are pretty clunky and barely manage to grasp at the Star Wars aesthetic, giving them the look of being designed by the B-team.

Though long gone from bookshops, this book had a large print run and brand new copies can still be picked up from secondary market sources like eBay.com for around $15 and Amazon.com from $20. 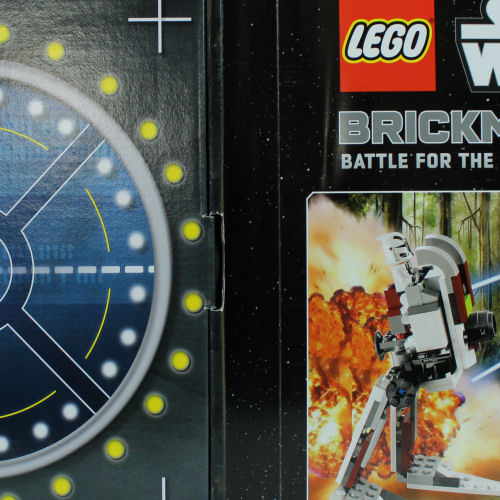 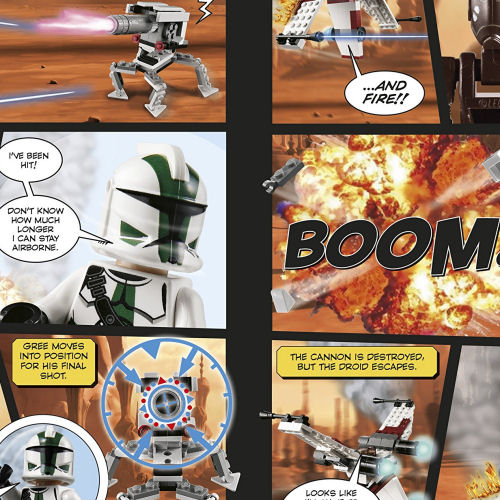 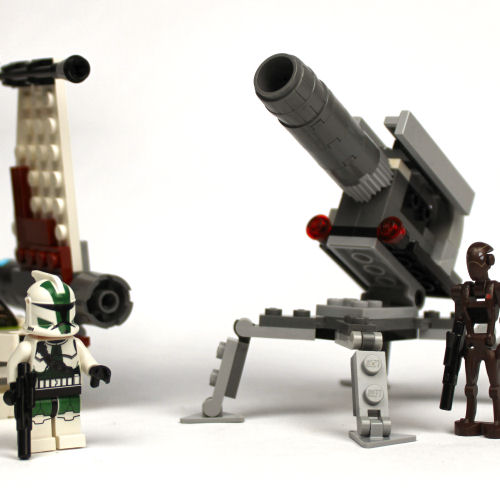 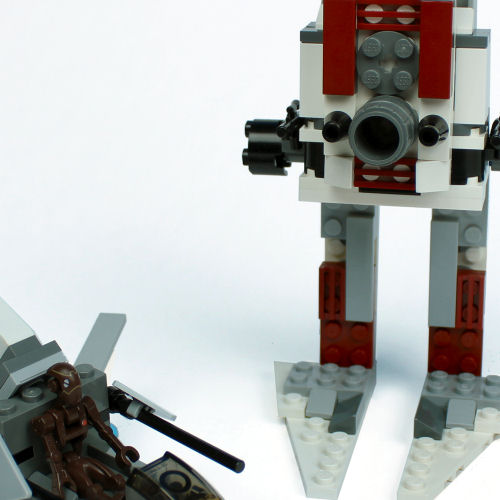 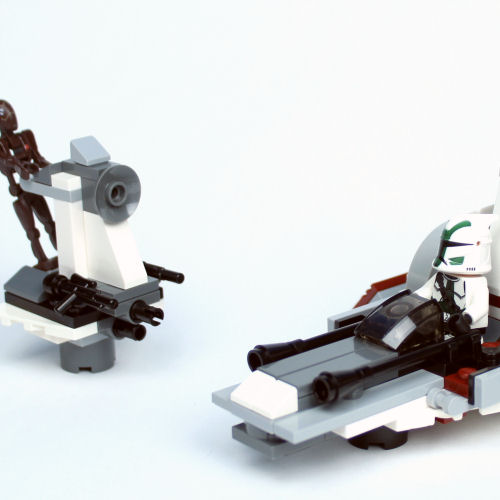 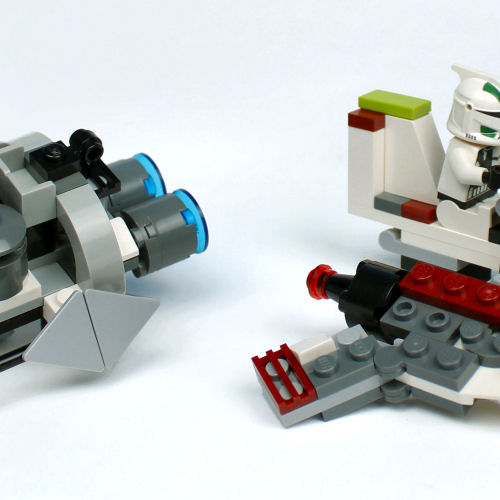 After a decent run, which was bookended by both LEGO Star Wars publications, the Brickmaster books ended in 2013. Revamped for 2015, DK's books with bricks format was changed to an Ideas-typebook that pivoted from build-along storylines to a collection of story starters that lead into a series of inspirational LEGO build ideas. The first title released was Friends, followed by Ninjago in the same year, with DK resuming the two-a-year schedule (2016 - City/Star Wars, 2017 - Nexo Knights/The Batman Movie, 2018 - Disney Princess/Ninjago: Greatest Ninja Battles and 2019 - Harry Potter/Star Wars: Galactic Missions). 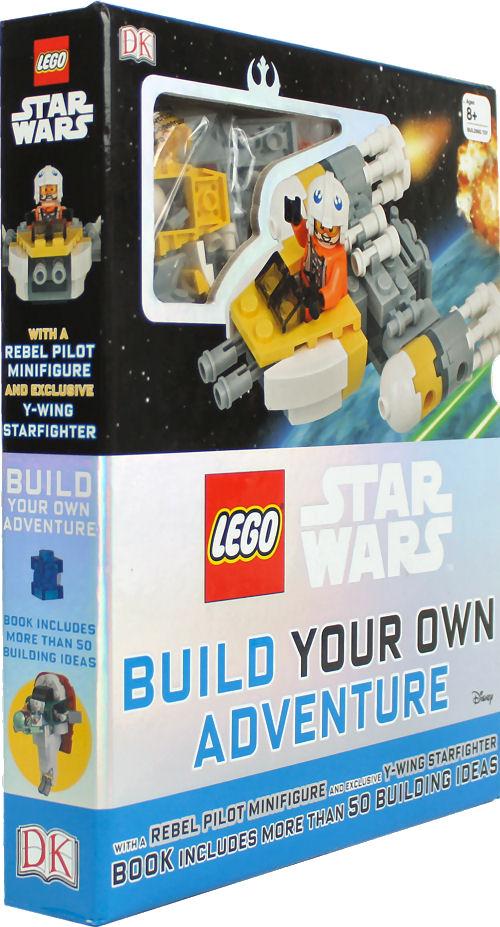 Sporting an exclusive MicroFighter Y-Wing, and as our original review pointed out, the first LEGO Star Wars bok in the series had a number of style and content alterations made to it, including a slipcase to house the contents.

The book only comes with a parts bag of 73 bricks and one set of buildings instructions for 11912 Y-wing Starfighter, which is the first time a Y-wing has been presented in MicroFighter form, and unlike the Brickmaster series, this BYOA book doesn't have alternate builds for the Y-wing pieces.

The set isn't just an enticement to buy the book, but a vehicle to move the story along. The book itself follows Zin Evalon, who's mission to recover a set of lost holocrons is a means to provide a series of inspirational builds.

This book is still available via real world and online booksellers, like Amazon.com and Barnes & Noble. 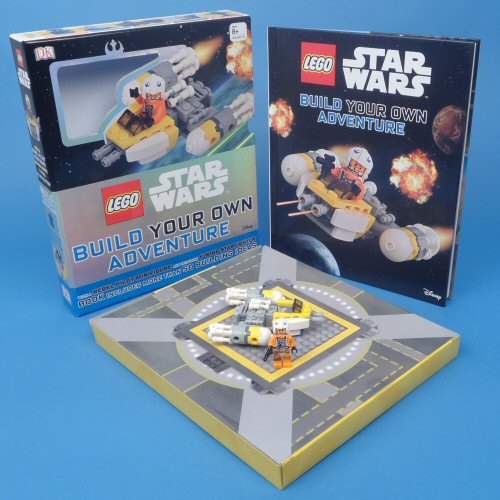 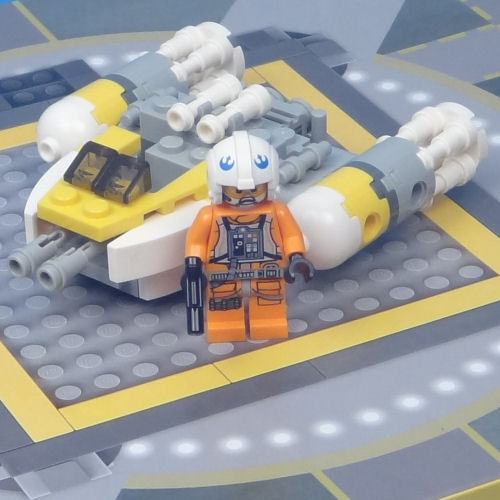 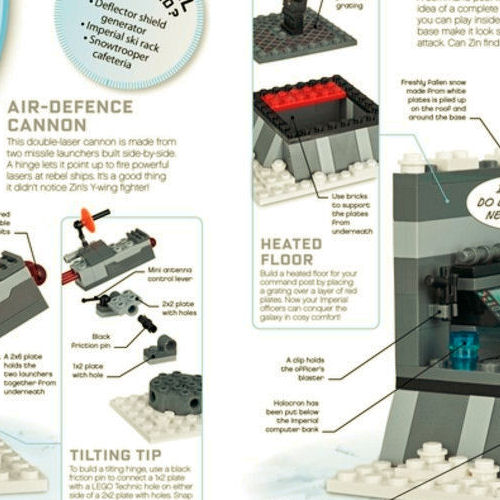 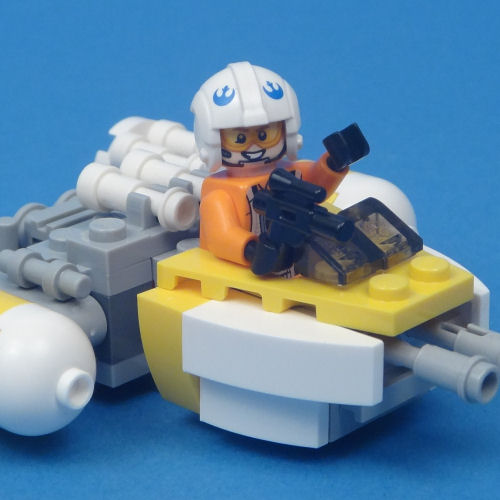 LEGO Star Wars: Build Your Own Advenure
Battle for the Stolen Crystal 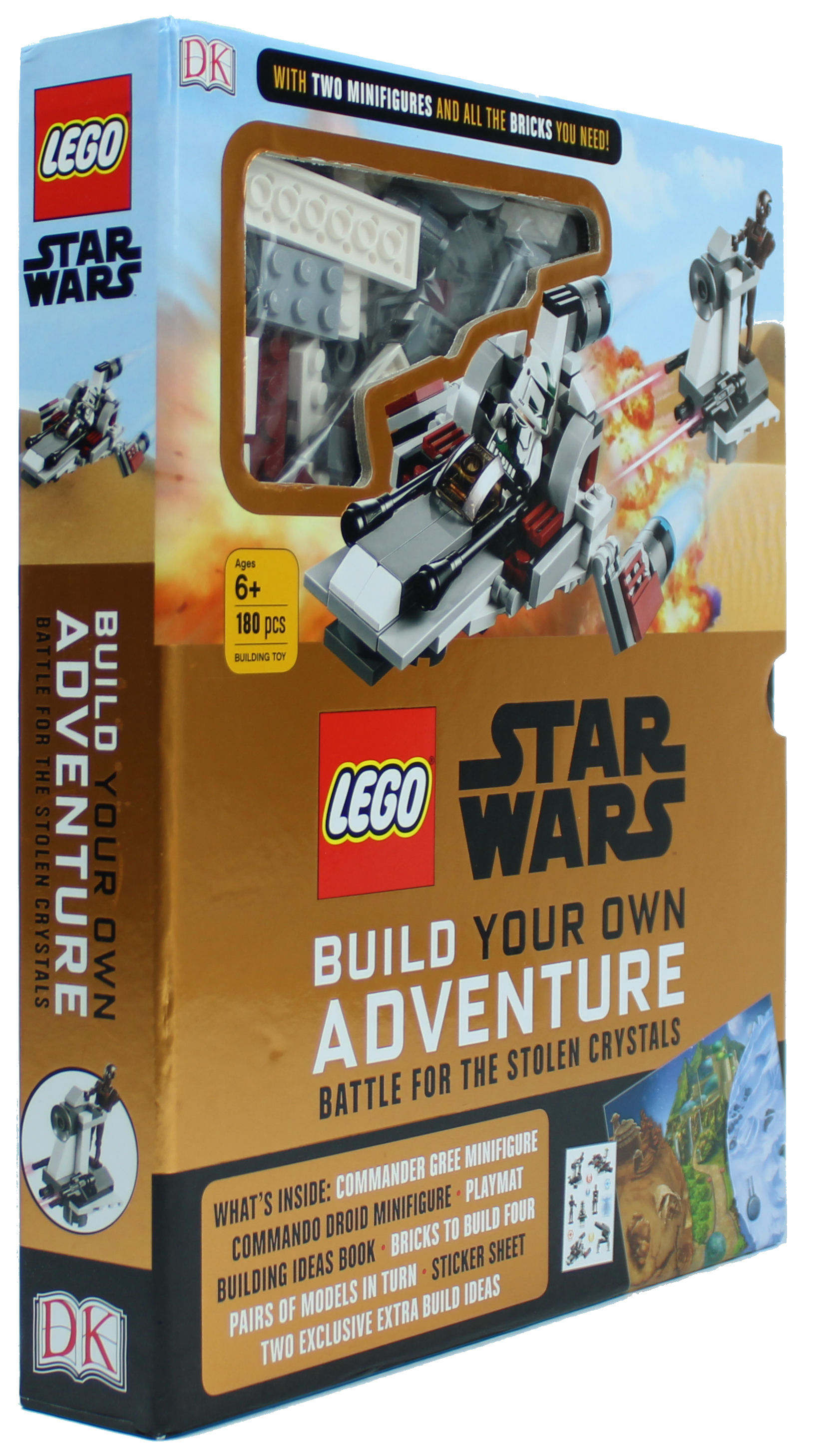 The second book in the Build Your Own Adventure book was actually the first Brickmaster book, rebundled to match the new style guide with a metallic bronze cover, slide-in book and cardstock LEGO brick compartment plus an exclusive sticker sheet and a paper playmat.

With the same story guiding the reader along, the builds are the same as the ones in LEGO Star Wars Brickmaster, with the addition of two exclusive extra build ideas: an eopie, the beast of burden from The Phantom Menace, and the Acklay seenin Attack of the Clones. Both are minifig scale and completely unique. While the instructions aren't the step by step guides that steer the reader to complete the story-line vehicles, they act as great bridging builds to encourage a closer look at the new-and-evolving Build Your Own Adventure book series.

Exclusively available through Costco and LEGO in the United States and now out of print, this title can still be bought on eBay.com for around $20 or at average of $35 on Amazon.com. 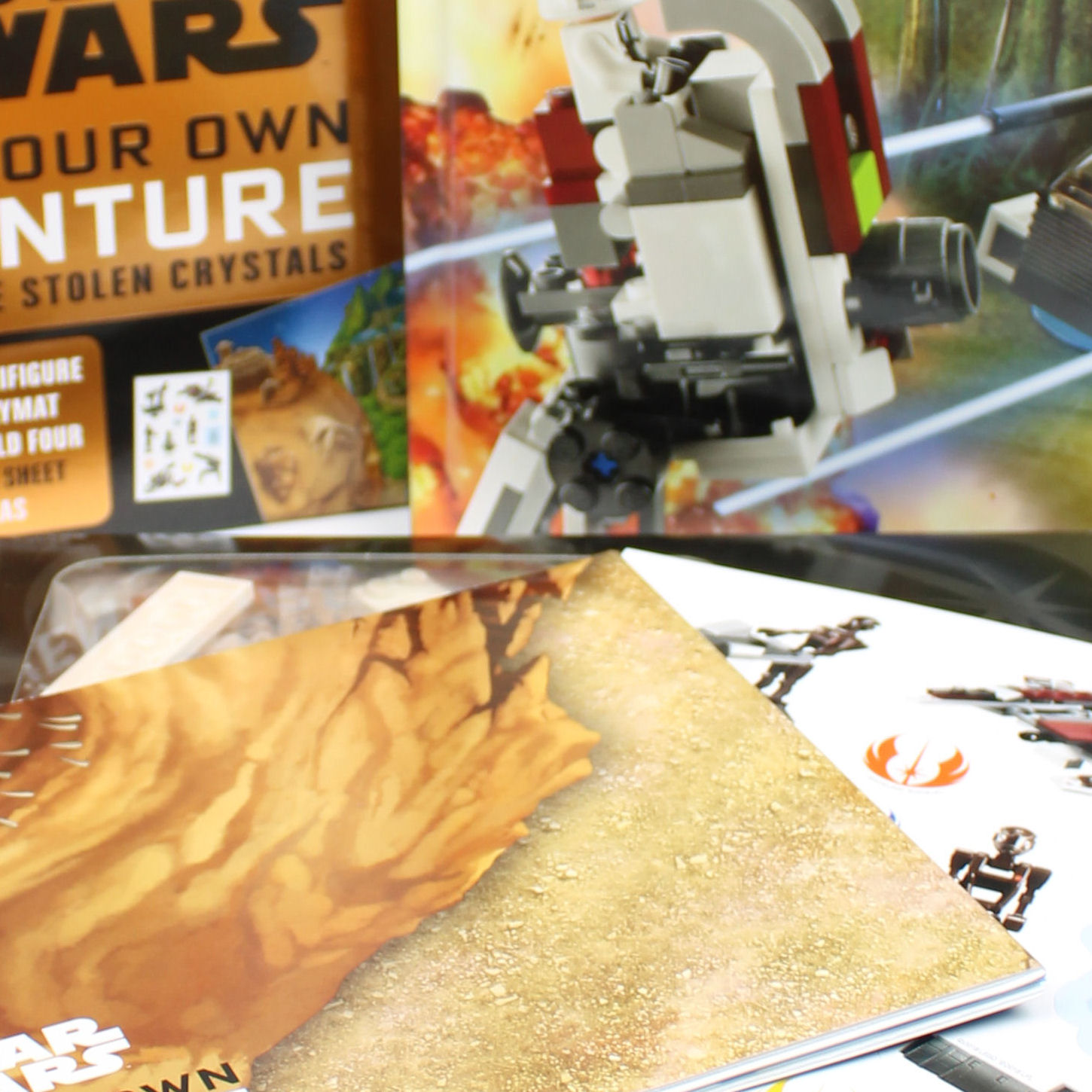 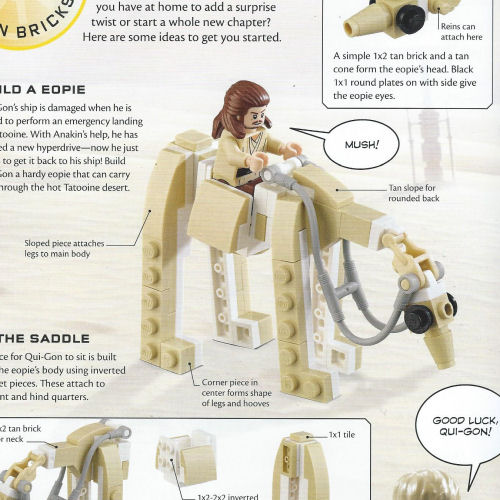 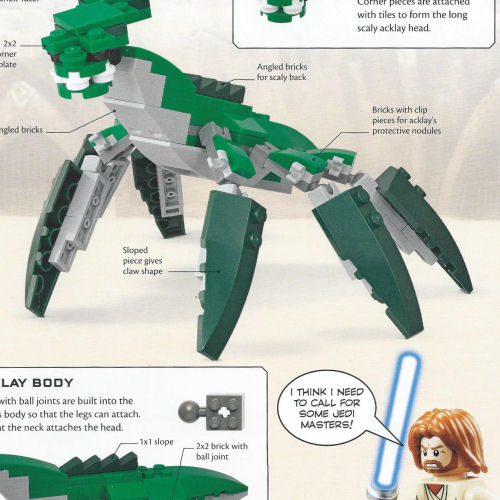 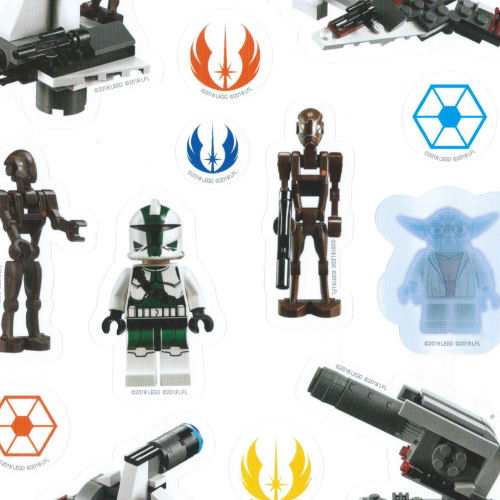 This on going series is set to have the tenth book added to its growing list of titles on August 6th when LEGO Star Wars Build your Own Adventure: Galactic Missions is released. Check back for Rebelscum's synopsis and Son of LEGOscum's unique review!
SEND