DK: The Amazing Book Of LEGO Star Wars Review
Posted by Jeremy on April 26, 2017 at 05:06 AM CST
Coming across as a junior LEGO Star Wars: The Visual Dictionary, published in 2009 and 2014, this book is a kid-friendly Star Wars encylopedia presented in a distinctly LEGO style. With punchy characters, foil stamping and the offer of a giant poster the front cover is certainly an eyecatching one and the book's solid thickness and heft holds the promise of a quality DK title. 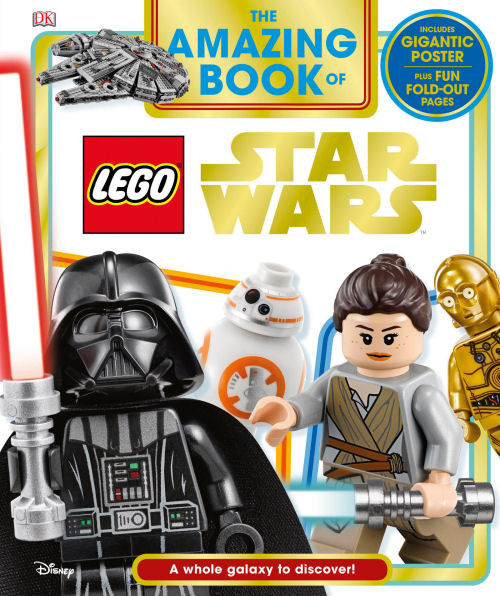 While the original and updated/expanded LEGO Star Wars: The Visual Dictionary were aimed at an eight to twelve year old market they were well-supported by the Adult Fans of LEGO community. This book, however, has definitely been produced for a younger market and though the boiler plate states it is for children between six and nine, kids in the upper age range are likely to find that their attention will wander.

And to this purpose Son of LEGOscum has shared his thoughts:

I wanted to read this because it came out on my daddy's birthday and the cover looked cool because the front was shiny. When I started reading it the book looked like it was going to be fun but I got through it really quickly because it was mostly pictures. I like to spend time really looking at the photos and reading about the sets and I thought that this book would be like that but it wasn't. I didn't learn anything new about the characters or the ships because I have both Visual Dictionary books but I did like that the pictures were really big because I could really look at the detail of the minifigs, and they made the colours of the bricks really amazing.

Inside is a plethora of all the nouns of LEGO Star Wars with persons, places and things all represented in a lighthearted way. In a similar fashion to the previous Visual Dictionary books the photos are big and friendly and, being all stock photos, perhaps a touch on the familiar.

Though the book doesn't include a minifigure - the first time DK has done this with one of their large format, hardback books - it does come with a poster of 75105 Millennium Falcon which will appeal to the target audience. This is definately a cost saving measure (and one I'm sure we'll see more of in coming publications) and will be a drawback for adult collectors of LEGO Star Wars.

The final verdict from LEGOscum and Son of LEGOscum is that though it is a visual hit it's a bit of a miss that doesn't come up to DKs usual standard. While children in the six to seven age range might get something out of this it won't be for very long as the book is over-simplified and doesn't challenge a child's creativity or wonder enough to encourage them to really delve in to LEGO or Star Wars. Grown-up fans are likley to skip this title and would only add it to their collections if they find it at a discount and are compeletists.