LEGO: 75196 A-Wing vs. TIE Silencer Microfighters
Posted by Jeremy on November 20, 2017 at 11:45 PM CST
Duel or dual? These LEGO Star Wars MicroFighter two packs are sure to be depicting key elements to The Last Jedi storyline. 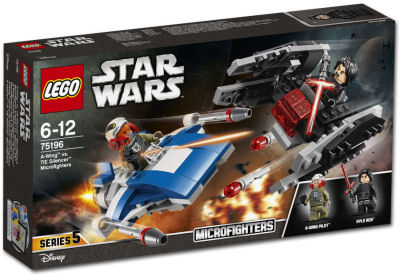 Arrange the space duel between the Kyle Wren LED fighter and the Type A fighter of the Resistance.

Plant the mini-figures in the cabins of their ships, load rockets on board and start the fight.

When two tribes go to war, a point is all that you can score (Workin' for the bad guys) sang Frankie. And in this set Microighterversions of the TIE Silencer, complete with a Kylo Ren minifig, and stalwart of the Alliance and Resistance fleet, the eponymously shaped A-wing, comes with a utility ladder to allow the female A-wing Pilot minifig to ascend to the cockpit.
SEND