Rebelscum has received further information, as well as photographic evidence, to back up some very interesting information about this set.

With regards to the photograph, it's not worth reproducing on two accounts: it is literally a thumbnail image and isn't worth the pixels it's displayed on, and the amount of hassle Rebelscum would receive from LEGO would be out of scale with the quality of the picture. Rest assured that when we have a decent image to share we will.

What the image, and its source, does provide is a chance to verify some of the tidbits of information that have been attached to the set. For starters the set's name is Sandspeeder and it's an expanded universe set or, as LEGO prefers to call it, a LEGO Original (LO). It definitely comes with two minifigs (neither of which is a droid), has dual spring-loaded shooters, a vaporator with a base that has some kind of action feature built into it and will be boxed in The Last Jedi packaging. Our informant believes that this will be a retailer exclusive and available in time for Christmas, rather than the New Year.

One of the most curious discussions that has centered around this set is that those who have alluded to seeing an image (likely the one mentioned above) have described it as a tan or orange snowspeeder. Any diehard collectors of the vintage Kenner Star Wars action figure line who are reading this (hello!) will likely be leaning forward in their seats right now, because from what Rebelscum can tell 75204 Sandspeeder is either directly lifted from, or heavily influenced by, the The Epic Continues Rebel Armored Sandspeeder.

The history of the Kenner The Epic Continues line and Sandspeeder toy is as interesting as its modern counterpart.

In 1984, Kenner employee Mark Boudreaux and his design team began brainstorming ways to extend the Star Wars toy line, hoping to prolong the inevitable falloff of interest in the brand due to the lack of a new film installment.

The Epic Continues was a planned 1986 extension of Kenner's "Power of the Force" action figure range. It was to feature original characters and vehicles, stemming from a new plot line created by Kenner designers.

For new vehicles to go with the line, Kenner created a variety of prototypes and designs based on or inspired by the craft seen in the original trilogy of Star Wars films. 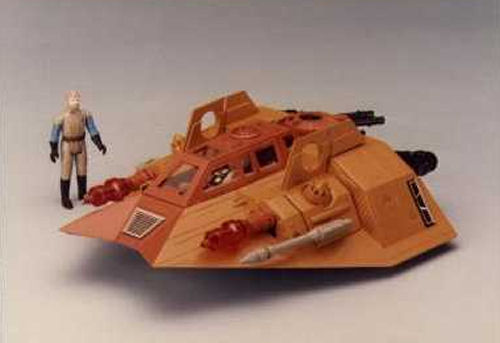 Included in the line was a kit-bashed Rebel Armored Snowspeeder that was cast in an orange plastic and had external features added to increase its originality.

The Sandspeeder was planned to be implemented into Kenner's The Epic Continues storyline, but the line had been cancelled. It was included in a binder containing several images of planned toys within The Epic Continues, some of which later appeared in the article Tales of Phantom Toys in Star Wars Galaxy Magazine.

Prior to the Disney expanded universe cull of the Kenner designed T-47 Sandspeeder this vehicle was canonised in The Battle of Cadinth, a short story by Bill Smith in 1995, and in the Decipher CCG "Special Edition Limited" set that was released in 1998.

Now it is getting a third chance to be made into an officially recognised Star Wars entity. Who knows, maybe more toys from The Epic Continues line may be realised through LEGO?
SEND