LEGO: Build, Play, Love
Posted by ° on October 11, 2018 at 10:29 PM CST
After selling out online and in its brand stores over the Early Bird weekend when VIP members flooded LEGO with orders, global stocks of 75192 became rarer than hen's teeth meaning only a handful of LEGO stores around the world had any to sell when the set went public. In a distribution campaign that some have branded a "debacle" does the 75192 UCS Millennium Falcon deserve the fan fare?

Since that first panicked rush the hysteria has died down multiple retailers in numerous countries around the world have these in stock, and eventually one came in to my possession.

A year on Rebelscum takes pause to get stuck in and share its thoughts on the new benchmark in LEGO sets. What's left to be said that a bunch of adult fans of LEGO haven't already blogged, tweeted and Youtubed about already? We thought we'd do something different and had a half dozen 10 to 12 year old's - with some guidance from LEGOscum - tackle the build for themselves.


Never before have the Six P's been more important in a LEGO build, because anyone who expects to dive straight into this set is going to hit their head at the shallow end.

Which is exactly what Rebelscum's junior build team did on Day One when it leaped before it looked and started pulling bags out of the first of four boxes; only to find that the expected bags 1, 2 and 3 weren't there. Instead a seemingly random selection of bags presented themselves so the build team regrouped and methodically emptied all four boxes and resorted the bags numerically and then re-distributed them in the right order across the four boxes.

Doing this presented us with two opportunities we'd probably have skipped over - the chance to marvel at the graphics on the four internal storage boxes and to get our brains around the mountain of sixty-six - yes, 66! - bags of LEGO that we would have to get through in the four days we'd planned the build over.

Once the groundwork was complete the first shift - myself (LEGOscum), OB1 (aka Son of LEGOscum) and Xavier - got stuck in. It all went swimmingly until a big mistake was spotted during the first stage of construction with the assembly of the base structure when a significant roll back was required, resulting in over two hours lost to fixing the issue.

While the junior build team took a break to restock their attention levels I gritted my teeth and diligently went through the previous twelve pages of steps - not once, not twice but three times - before I discovered the cock-up. Detecting my frustration my wife uttered some sage advice: Remember, it's meant to be fun.

It was at this point I began to question my relationship... with LEGO. 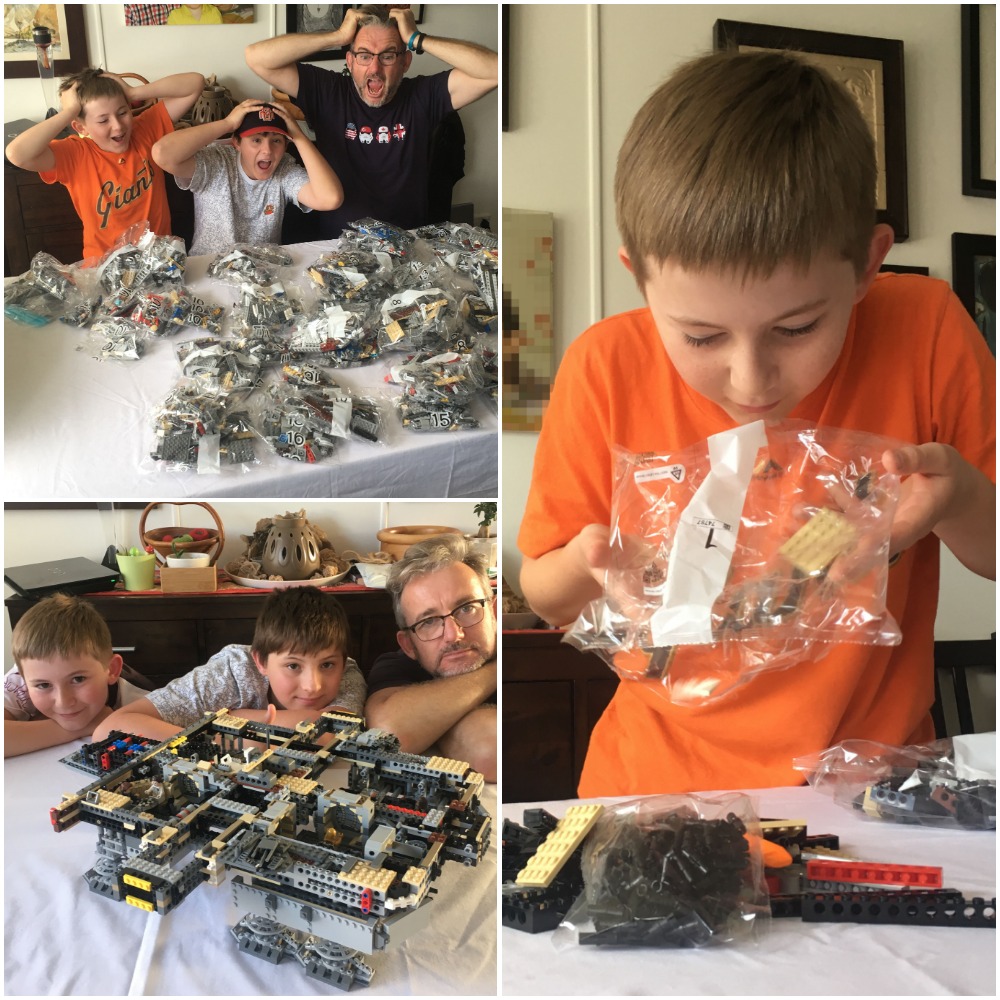 And the question I was asking? "Has LEGO taken the Ultimate Collector's Series too far?"

Think back to 1958 and the relative simplicity of the first set to include the LEGO brick in its current design, and draw a line from there to this latest addition to LEGO line-up. You'll see that it looks more like the population curve of the Earth: slow and steady until the 18th century and then a rapid upward trend that started with the first UCS sets. Yes, the LEGO Star Wars line is the toy industry equivalent to the Industrial Revolution.

Ten years ago - before I experienced my own Peak LEGO event - I would have smashed this set out without any pause but now, in my mid-40s, I was struggling. Was it too complex, had I lost my building skills, was I sulking because I'd made an early mistake or was I just out of practice after a half-decade long Dark Age?

Whatever the reason was I found myself frustrated with the complexity and becoming less and less interested in completing this build. Sharing my thoughts in this write-up helped me through my hump and get on with the rebuild. Before long the entire build team was back at the brick face.

The junior build team declared the second set of bags to be the easiest part of the build so far. With another 15 stages to go this seemed presumptuous but it was called with such surety that no-one dared argue. (And as it turned out the claim stood the test of the entire build.)

As easy as the landing legs were the junior build team's interest started to wane but stage three started with the promise of putting some minifigs together. This held their attention for one more page but after this they were done and went to watch the recently released home theatre version of Solo: A Star Wars Story, which was alright since it meant the Millennium Falcon still held their focus. Once I'd found my groove I was building like it was 1979 and though the junior build team got the honour of building the set's fist minifigs I got to put the first sticker on. And who doesn't enjoy that?

The junior team must have figured how much fun I was having \and for the next three build stages the gang was back together. Progress was swift and before long several interior sections had taken shape, the underbelly and engines were in place and the mandible were giving the skeletal Falcon its distinct form.

Time was called after nine solid hours of building, and the whole team let out a collective groan as they straightened their backs.

Unsurprisingly day two of the ultimate build began where day one left off; this time LEGOscum & Son were joined by Lucka, the younger brother of Xavier who was unable to make the second day's build. Once the morning briefing was over and appropriate safety equipment issued it was time to start adding the detailed lower hull plates, and while the visual impact wasn't immediate their effect on the set's balance and lift points was making the Falcon become unwieldy and the weight was beginning to show how much strain the Technic framework was required to support. 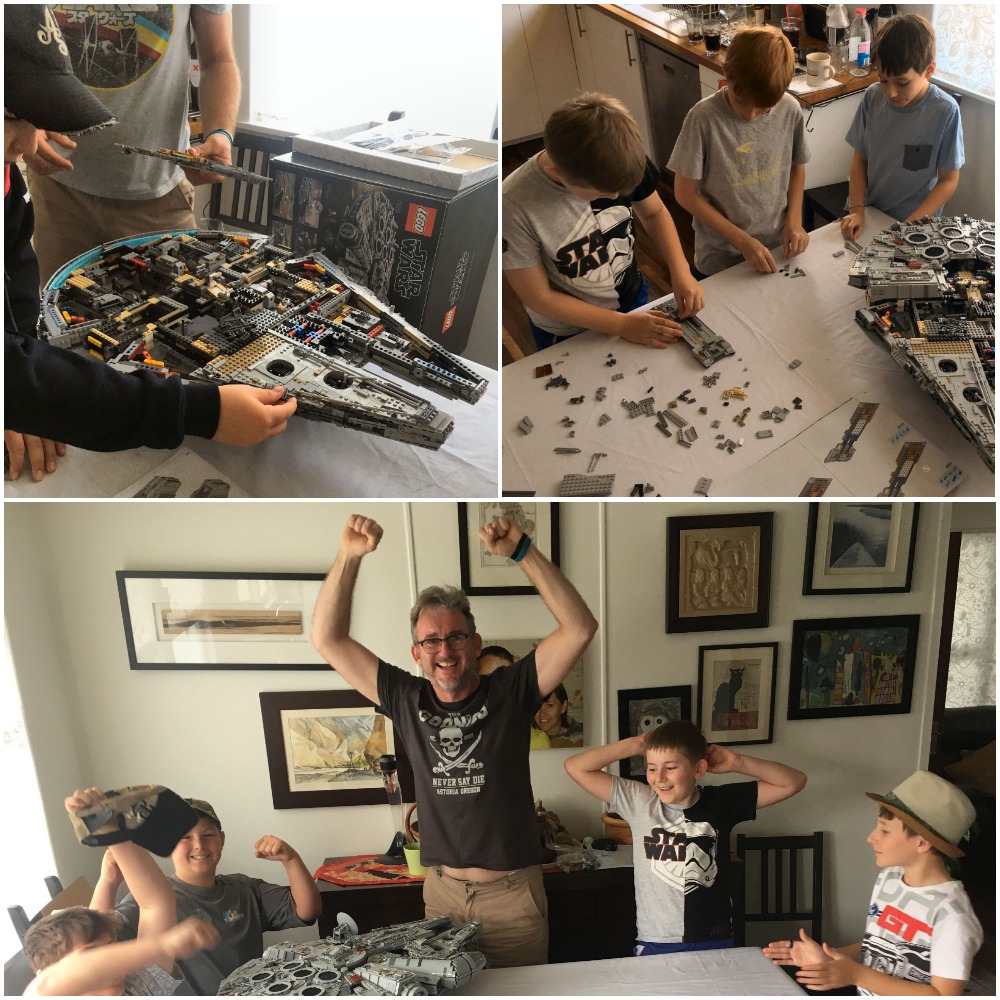 By stage nine the junior build team had found their feet and feeling emboldened enough to go on without the senior build staff - an unusual step for me, and one I suspected might be linked to my initial concern that I was falling out of love with LEGO.

Looking back through my personal LEGO timeline I recognised this to be a similar set of symptoms that led to the Dark Age that filled most of the Noughties. This, coincidentally, resulted in my unopened first edition 10179 getting sold off and my eventual, remorse-led reawakening to LEGO Star Wars. Maybe this was just a touch of melancholy and this new UCS Millennium Falcon was the tonic I needed.

Looking at the junior build team beavering away to finish off the mandible hull plates I began to think that a spoonful of UCSugar was just what the doctor ordered, and the thought that I was entering a new stage in my life as an AFOL was beginning to dawn on me.

Instead of being a card carrying LEGO fan perhaps my role as an official ambassador was to stand back and simply be a PFOL - a Parental Fan Of LEGO - and hold Son of LEGOscum's head under when he deep dived into LEGO Star Wars. As sentimental as this sounds it did feel plausible.

Over the next two days the junior build team included Jack and Charlie, bringing the total number of builders to six, and the Falcon was completed by their hands with minimal assistance (but stacks of encouragement) from me. And that's when I realised I still loved LEGO; not for nearly 20 years of LEGO Star Wars but for giving me the chance to enjoy another childhood - my son's.

On the final day of the build the entire team got together to assemble the last section - the cockpit. With all the elements carefully separated into discrete piles five pairs of small hands worked as a cohesive unit to put the final touches on the biggest hunk of junk in the galaxy. 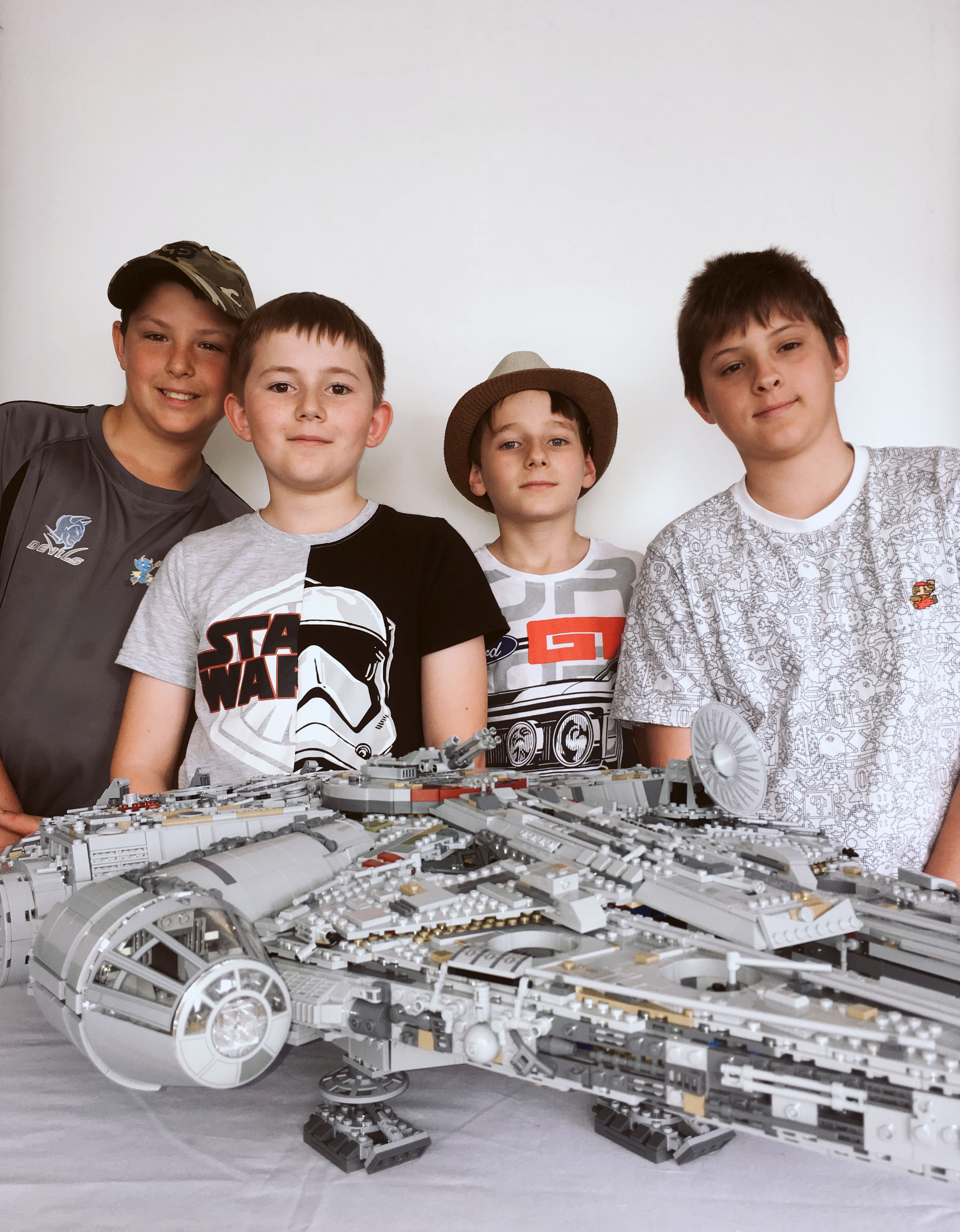 Junior build team (left to right): Lucka (11 yo), OB1 (10), Charlie (10) and Xavier (12). Not pictured is Jack (12)
Before they all went their different ways each of my now graduated builders took a moment to reflect and the time they'd spent together and to explain what their favourite aspect of the set was.


Job done right? Far from it - there is still the option of what display to explore, the interior mods to complete and the lighting by Brickstuff to install. Not to mention the Death Star hanger diorama that will eventually house it to build. Finished? I've only just begun to finish!


If this review has helped you decide to purchase a 75192 UCS Millennium Falcon we ask that you consider using our affiliate LEGO link to help support the volunteer work we do to make sure Rebelscum's readers have the best possible Star Wars collecting news in the galaxy.