If you haven't got time to read this entire post then here's the results in a nutshell:

"Over the past several months, the LEGO Review Board has carefully reviewed the 6 projects that reached 10,000 supporters between May and September 2017... none of the 6 projects in review have been selected as the next LEGO Ideas set."

If you want to find out the full details you can read an in-depth explanation on the LEGO Ideas blog.

This is a first in the seven year history of the Ideas programme, but this isn't what has got LEGO Star Wars fans sitting up and taking notice though.

In the explanatory video (below) the presenter from the LEGO Ideas team explains why, without being too specific or going into detail, why there were no selections. What is of note, according to several websites like The Brick Fan and Promo Bricks, is that this is all a teaser plot by LEGO to secretly reveal a new set.


What set though? You might remember that in May, 2016 we tipped I Am Your Father, and last August it earned the necessary 10,000 votes and got selected by LEGO Ideas review board. Unfortunately in the time it took to get to the review board, LEGO Ideas changed the submission guidelines: "LEGO Ideas will no longer accept new submissions based on third-party licenses that are active in the LEGO Groups portfolio." However, rather than effectively nix all the existing LEGO Star Wars projects there was a grandfather clause that stated "Projects currently being reviewed, as well as active projects that reach 10,000 supporters in the future, will still be evaluated as part of the LEGO Review." So happy days!

Until now though. But fan conjecture is keeping I Am Your Father alive and the community is examining the video (above) for any and all clues. Chief among them is the generic explanation that is given  if a project, lets call it x, is not approved in the review because it is too similar to a product that is being developed internally, then naturally we wouldnt be able to share that news with everyone, that x has not been approved...

"Fans should try substituting the x for Cloud City, and see how much sense the explanation makes. None of the projects make sense as something that would be already being developed internally, except maybe the two NASA projects  but those of those are comparatively niche compared to the currently available NASA sets. The only project that could be too similar to an in-development product  because instead of a single set it would be part of a giant new version  is I Am Your Father, which will of course be a small section of a new Cloud City set."

The second clue are the bleeps that are dubbed over the presenter's audio (2:20 and 2:29) while he discusses a potential set that is in development. Fans are sharing their thoughts with "space shuttle"and "Bespin playset" being the most popular.

Rebelscum contacted a number of lip readers, and are hoping to get a consensus of opinions. We'll report back on their conclusions as soon as we can.

Connecting the dots has lead fans to believe that the rumoured 75222 CONFIDENTIAL_DTC CC, which surfaced last October, could be Cloud City. 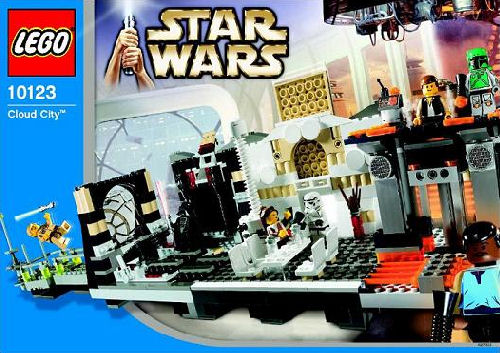 LEGO has only produced a set depicting Bespin's city in the clouds once before - 10123 Cloud City - way back in 2003. Its original retail price was US$99.99 has been inflated by 450% on the secondary market, according to Brickpicker.com, and given the recent trend of rehashing UCS sets this could be a prime candidate for LEGO to issue an improved set.

Is this pure speculation? Are fans (lip) reading too much into this? Feel free to comment in the Official LEGO Ideas thread in our discussion forums.
SEND