LEGO: New Y-Wing Coming? Part II
Posted by Jeremy on February 27, 2018 at 04:40 PM CST
Don't expect any crystal clear revelations going into this post, because we are still looking at muddy waters. It's just that the currents are starting to help the sediment settle.

We presented our first piece of evidence last week when Rebelscum discovered some pictures of two new minifigs.

Now we have unofficial - and unconfirmed - information from inside LEGO that an internal confidential catalogue that was distributed to LEGO employees last month had an announcement on this set. 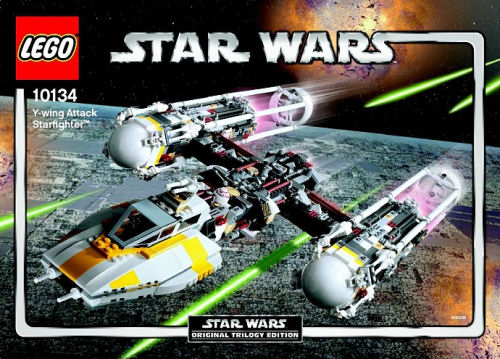 The last time fans had a UCS Y-Wing to build was in 2004, when LEGO released 10134 UCS Y-wing Attack Starfighter (pictured above) so - given LEGO's current proclivity for re-releasing UCS sets - now is about the right time for it to be revisited.

The chatter amongst members of the various LEGO Star Wars communities are all pointing to this new UCS set being attached to the number 75181, as outlined in our LEGO 2018 recap from earlier this month.

Looking back at previous UCS releases there is a clear pattern surrounding the May The 4th Be With You celebrations, and it is notable that for the last few years the official annoucements have typically been made in the last two weeks of February and the first two weeks of March.

As one LEGO Star Wars fan posts in Eurobricks:

None of this is by any means concrete and are just more pieces to the puzzle, but if there's one thing that LEGO fans enjoy it's putting things together.