Rebelscum's Guide to LEGO Star Wars Keepsake Ornaments
Posted by Jeremy on November 23, 2019 at 04:20 PM CST
by Jeremy Beckett & Duncan Jenkins
Synonymous with holidays and celebrations, Hallmark (named after brother-founders J.C. and Rollie Hall) has been on the innovative edge of greeting cards, holiday ornaments, and other seasonal essentials from its Kansas City headquarters since the early 1900s.

What originally started out as one brother selling postcards, before branching out to gift wrapping paper, Hallmark has grown into one of the most recognisable brands in the world.

As well as being responsible for the colorful, festive gift wrapping paper - which is a far cry from the plain brown utilitarian wrap used at the beginning of the last century - as we know it today, Hallmark has also taken Christmas tree ornaments into new and exciting directions.

Coincidentally, their big break in licensed Christmas decorations came in 1932 when a small animation studio in California - also founded by two brothers who gave their surname over to branding - called Walt Disney Productions approached Hallmark to use their cast of cartoon animals on a new range of character ornaments to help build brand awareness.

This landmark agreement started one of the earliest collector crazes, and as we know now, it was a match made in heaven that continues, in greater force, to this day.

It's hard to imagine a Christmas tree without Hallmark Keepsake ornaments hanging off its pine-needle tipped branches, and harder still to think that after Hallmark launched the Keepsake range in 1973 - notably only four years before A New Hope hit cinema screens - the Kansas City company still took nearly a quarter of a century to add Star Wars to their Keepsake line-up. 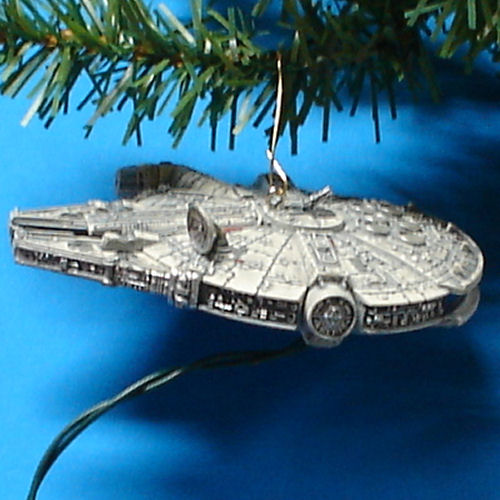 Jump forward a further 24 years when Hallmark released its first Star Wars-themed holiday ornament in 1996 - the Millennium Falcon. Hallmark's initial Star Wars offering was part of their general Keepsake line, but its immediate popularity gave call for the creation of a separate Star Wars series of Keepsakes ornaments and every year since then, new ornaments have been added to the line.

The Star Wars Keepsake collection now boasts over 150 different vehicles, characters, and scenes that range from familiar (Luke Skywalker and Princess Leia) to obscure (Momaw Nadon and Saesee Tiin) - and even have lights and sound.

Though the Keepsakes line existed four years before the release of A New Hope in 1977 the movie wasn't on the company's radar and it was only in 1996 when Lucasfilm released the Original Trilogy in Special Edition format that the popularity of Star Wars left the shadows and stepped back into the world's everyday consciousness.

Asked why Hallmark didn't get on the Star Wars bandwagon earlier, Hallmark explained that prior to 1991 they largely eschewed pop culture and sci-fi themes in favour of the traditional designs and evergreen themes like Disney and Peanuts. But because a Keepsakes sculpting artist who was a huge Star Trek fan was able to convince the Keepsakes team and licensing department to try a Star Trek ship in 1991 (which sold out), Hallmark saw the possibility to add Star Wars to the development calendar.

Initial negotiations to make Star Wars Keepsakes ornaments began at the same time Hallmark launched their Star Wars greeting cards in 1994, but because at the time they were on a two-year production cycle for Keepsakes the final ornaments didn't reach market until 1996.

The addition of the LEGO Star Wars characters to the Keepsakes collection came after Hallmark and Lucasfilm had a discussion, circa 2009, on how to extend Keepsakes to a new age group. At the time LEGO Star Wars was a steamroller in the toy industry and Christine Taylor, Licensing Creative Manager at Hallmark, says that the company felt it "seemed to be the right way to reach younger kids  who were discovering Star Wars through LEGO  for our social expression categories."

Utilising reference books like the LEGO Star Wars Character Encyclopedia and minifigures in personal collections, as well as style guides provided by Lucasfilm and The LEGO Group, the new born development and design team got to work. 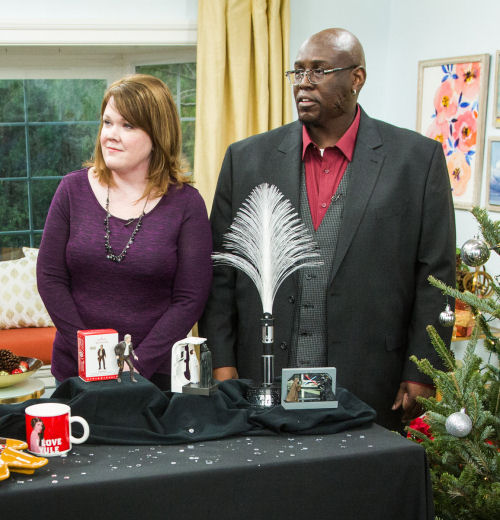 Artist and sculptor Orville Wilson, who worked on the main range of Star Wars ornaments was a natural fit for the new LEGO Star Wars line, has a lot of fond memories of watching Star Wars and playing with LEGO as a child:

"I would build lots of rockets and space ships and I would even try to recreate other things with them like boats and planes. I also have great memories of Star Wars. I got to see New Hope and Return of the Jedi on the big screen when it came out in theater. So to take both of my favorite things and mash them into one was a dream come true. When working on them though I kept hearing the Imperial March in my head!"

While the first Keepsake ornaments were made from porcelain their popularity increased the need to produce more and more each year, and so styrene was introduced in the last quarter of the 20th century. This naturally occurring organic polymer can be industrially produced in mass volumes, is lightweight and durable, and has "an outstanding ability to replicate the subtle details and dimensions of an artists original sculpture" making it possible to achieve the result that Lucasfilm, LEGO, Hallmark and fans want.

Orville sculpted the most iconic villain of the movie franchise - Darth Vader - and his work was chosen to be the debut LEGO Star Wars character of the new collection when it premiered in 2011.
To maintain their appeal each design is only sold for one season. Once retired it isn't re-issued, though on rare occasions the company has reintroduced previous ornaments - with a colour scheme change - back into the Keepsakes line. Only once in the company's plus 100 year history have they re-released a Keepsake ornament in its original format, without any alteration, and it was the launch LEGO Star Wars Keepsake line that changed history.

Though Hallmark had a strong hunch that LEGO Star Wars ornaments would catch the eyes of both children and collectors they still underestimated demand. After its initial run, which sold out long before the start of the holiday season, Hallmark knew they were on to a winner and decided to take the unprecedented step of re-issuing Darth Vader alongside the 2012 addition - an Imperial Stormtrooper - making the original (2011) Darth Vader an oddity amongst Hallmark collectors.
In selecting new characters Hallmark tries to stay linked with Lucasfilms and The LEGO Groups' focus and priorities for LEGO Star Wars, which was demonstrated in 2013 when Hallmark released Yoda to complement The Yoda Chronicles marketing push. Alongside the first fully-fledged LEGO Star Wars TV series and a small range of complementary LEGO Star Wars construction sets, Hallmark added their own touch.
With a few of the main characters under their belt Hallmark decided to hit a LEGO-stylized character that would look extra cool and have major fan appeal, so, knowing that their next selection was a cult favourite they knuckled down to make sure they got it right.

"Once we decide on a direction, we submit a concept for approval to Lucasfilm & LEGO. Then we acquire good 3D references and artwork from Lucasfilm and LEGO for a sculptor to create in a pose that we have chosen and was approved at concept." says Christine, "That goes through approval and then we work with our production vendor to get right, as well as working with Lucasfilm and LEGO along the way as needed."

The result, in 2014, was Boba Fett and it was an instant success.
Following the Keepsake release of the original Mandalorian there was - as we now know - a five year hiatus in the series. "Our contract ended and LEGO had some different strategies on how they wanted to go to market with co-branded consumer products." Christine went on to explain.

Hallmark went on to explain that they took a step back until both parties were ready to come back together again. In the end, it was the popularity of Keepsake ornaments from two different IPs - the LEGO Movie and LEGO Batman Movie - that brought about the return of the LEGO Star Wars collection in 2019.

As a result of this break in continuity, Hallmark got to the Sequel Trilogy party later than the rest of the licensees community. Choosing to double down to catch up, they brought out a pair of Keepsake ornaments - C-3PO ad R2-D2 - in 2019. Asked if the 20th anniversary of the LEGO Star Wars license was as special to Hallmark as it is to LEGO, Christine explained "We wanted to offer something different than we have in the rest of the Star Wars line of ornaments" and so picked a classic duo to mark the return of LEGO Star Wars to the Keepsake line and to celebrate two decades of the license.
The absence of the grey LEGO brick stand in these two Keepsakes is obvious, but only the sharpest of eyes will spot that the eyelet on top of the C-3PO ornament is gold in colour, an addition that comes down to Hallmark's attention to detail.

These most recent LEGO Star Wars Keepsake ornaments are by sculpting artist Jake Angell, a Kansas City local who has been with Hallmark for nearly twenty years. Jake says that the funniest part of his job "is taking the ornaments I work on home to my kids. They are nine and twelve so we are all BIG Star Wars AND LEGO fans. I can count on them to help me find the figures I need for reference in our huge tubs of LEGOs."

Jake feels particularly rewarded by his efforts when he gets to reveal what he worked on to his kids. Topping off the experience is hanging the new ornaments on the family Christmas tree.

In addition to Keepsakes, Hallmark also added a non-Keepsake ornament - in the form of Darth Vader and Stormtroopers - to their LEGO Star Wars range in 2019.

Though the Skywalker story arc is coming to the close, Hallmark knows that retro-Star Wars will trend even bigger than before and has chosen another pair of characters from A New Hope for 2020 which, they believe, will keep the cadence of adding main, iconic characters to the Keepsake line. 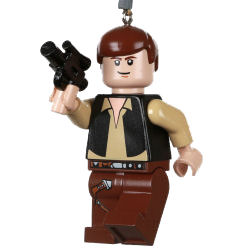 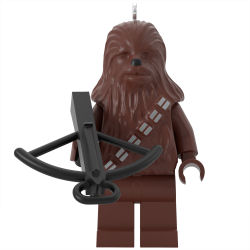 Those interested in adding a LEGO Star Wars Keepsake ornament section to their collection need not baulk.

As a collectible they are very easy to get into, and most can still be picked up close to their MSRP - meaning that, unlike like regular LEGO Star Wars sets which see rapid rises in value when they are retired, their secondary market price tags aren't prohibitive. For example, the original Star Wars Keepsake, the Millennium Falcon from 1996, had an MSRP of $24.00 and now can be picked up for around $60.00 - barely doubling in value over nearly a quarter of a century.

The LEGO Star Wars ornaments are even more affordable and "can still be purchased for around original retail price" says Duncan Jenkins, co-author of Gus and Duncan's Comprehensive Guide to Star Wars Collectibles. His research shows that the Boba Fett (2014) ornament is still available for approximately $10 to $15 while the others are in the $7 to $10 range for collectors who are willing to hunt down bargains.

For those who want instant gratification then Amazon and eBay are the best sources for older LEGO Star Wars Keepsake ornaments.


If you've read this far your interest level in Hallmark Keepsakes must be pretty high - so you might want to enter our giveaway for four brand-new-for-this-year Star Wars Keepsake ornaments, including the featured LEGO Star Wars ornaments for 2019. Don't tarry, because the contest closes in one week!
SEND