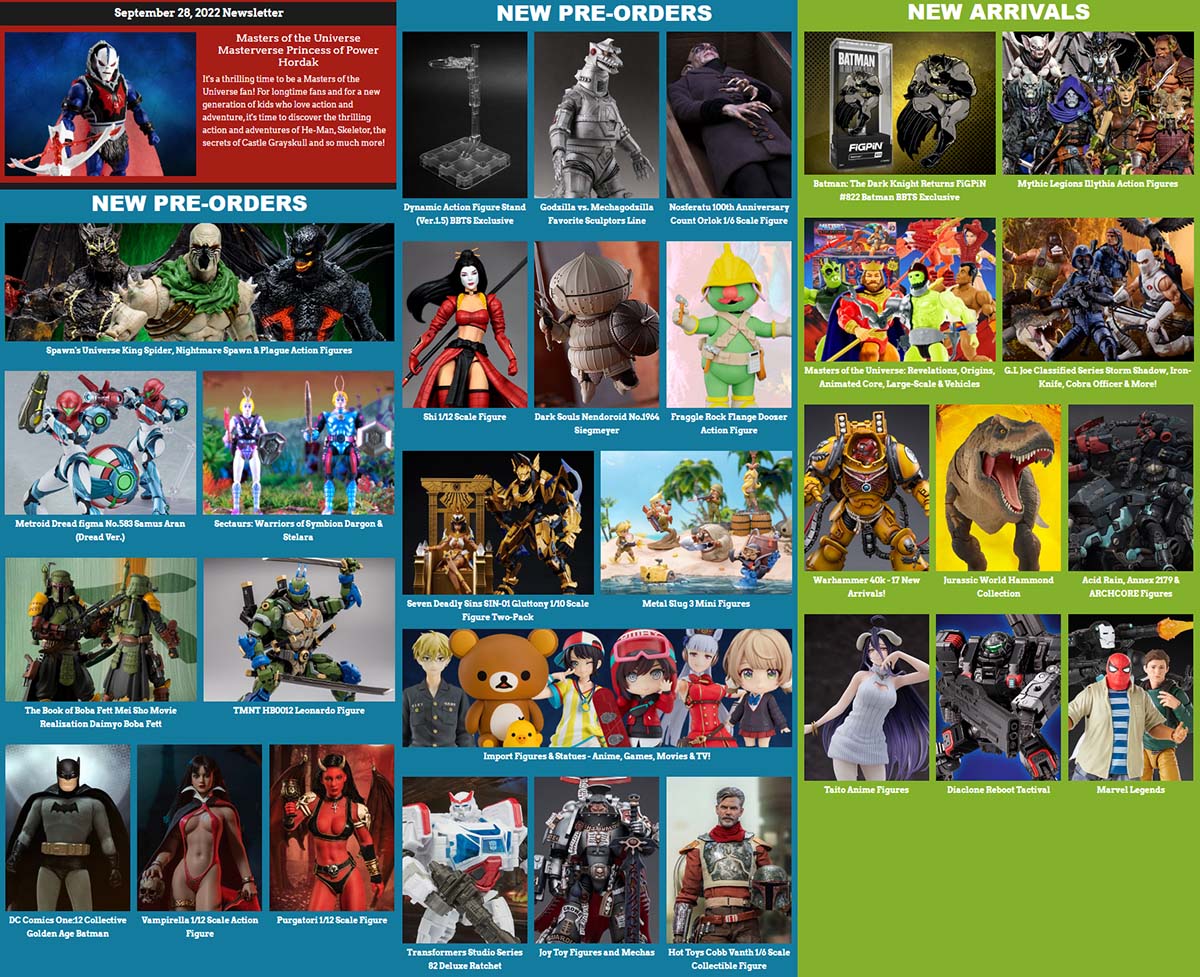 --------------
NEW PRE-ORDERS
--------------
It's a thrilling time to be a Masters of the Universe fan, the Masterverse Princess of Power Hordak is back! McFarlane Toys has released more figures to their Spawns Universe line! The strongest warrior in the galaxy joins the figma series once again! The Nacelle Company has just released the Sectaurs: Warriors of Symbion Wave 1! Drawing inspiration from his appearance in The Book of Boba Fett, Boba Fett joins the Mei Sho Movie Realization lineup in his reclaimed Mandalorian Armor! The Leonardo mech figure will take your figure collection to the next level! DC Comics One:12 Collective Golden Age Batman swoops in to save the day! What started as a comic magazine in 1969 quickly became a phenomenon, and now Vampirella gets a 1/12 scale action figure from TBLeague! Sakkara was an Egyptian slave until she met the vampire Rath who transformed her into the deadly and powerful Purgatori, now she is once again an Executive Replicas 1/12 scale figure! With the BBTS Exclusive Dynamic Action Figure Stand from Storm Collectibles you are able to display 1/12 scale figures with an easily adjustable bracket! Mechagodzilla, a weapon of destruction modeled after Godzilla by the Black Hole Planet 3 makes its way to the Toho 30cm series! Nosferatu made his first appearance on cinema screens in March 1922. A hundred years have gone by, but still today, his contorted shadow and skeletal hand gripping Ellens heart instils terror in us all! Executive Replicas and Loosecollector present the Shi 1/12 Scale Figure! From the popular action RPG Dark Souls comes a Nendoroid of Siegmeyer, the knight of Catarina! Invite this Nendoroid to your bonfire and add it to your collection of figures! Its time to dance your cares away with this brand new line of Fraggle Rock action figures! From MS GENERAL comes a new series to join your 1/10th scale figures: the Seven Deadly Sins Original Machine Girl series! Add to your gaming collection with the new Metal Slug 3 mini figures! Figures and statues from brands like Tokyo Revengers, Uma Musume, Hololive and more are newly released! Be sure to add the Transformers Studio Series 82 Deluxe Ratchet to your collection! The 1/12 scale world of Joy Toy figures continues! Hot Toys is delighted to officially present today the brand new 1/6th scale collectible figure of the beloved marshal Cobb Vanth!