LEGO: Happy (Belated) Birthday Club 75192
Posted by Jeremy on September 21, 2018 at 11:02 PM CST
When the official announcement - after months of speculation and leaks - of the impending release of the updated Ultimate Collector's Series Millennium Falcon was finally shared LEGO and Star Wars fans were equally excited and astounded.

Then came the word that those who took the plunge and bought the set on its opening weekend would get their VIP membership upgraded and given access to a series of exclusives. While the new set, upgraded from the original 10179 UCS Millennium Falcon, was the bait the Black VIP card was the hook used to reel in customers who weren't quite convinced that spending a large sum of money on a single set was a good idea. 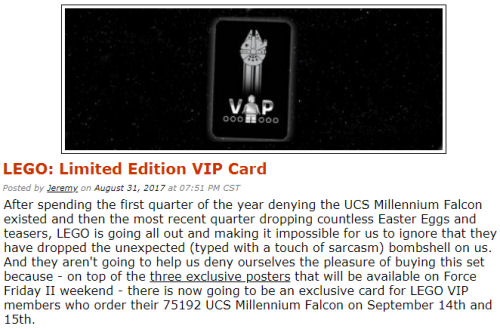 Having a track record of not being able to successfully second-guess their Star Wars customer base the popularity of this set took LEGO - who initially expected sales to be hesitant - by surprise and proved they weren't prepared for the ensuing stampede.

In an attempt to assuage consumers who couldn't place their orders on that first weekend LEGO extended the early bird pre-order window, created a virtual waiting list and then opened up the limited edition VIP card membership to all who successfully bought the 75192 UCS Millennium Falcon before the end of 2018.

Though the details were kept under wraps, LEGO did make some clear promises about the scheme:

"A full year of special Star Wars
themed offers throughout 2018."From this we assumed that the benefits would begin at the start of 2018, and though the first Club 75192 promotion was announced on February 1st it arrived slightly later than card holders expected and the double VIP points was seen to be a lackluster inaugural event.

It wasn't until May, with the annual May The 4th Be With You commercialpalooza, that the second advantage of being an early investor of 75192 UCS Millennium Falcon was rolled out - a limited edition blueprint of the upcoming 75181 UCS Y-Wing Starfighter and an automatic sweepstakes entry to win a platinum R2-D2 minifig. 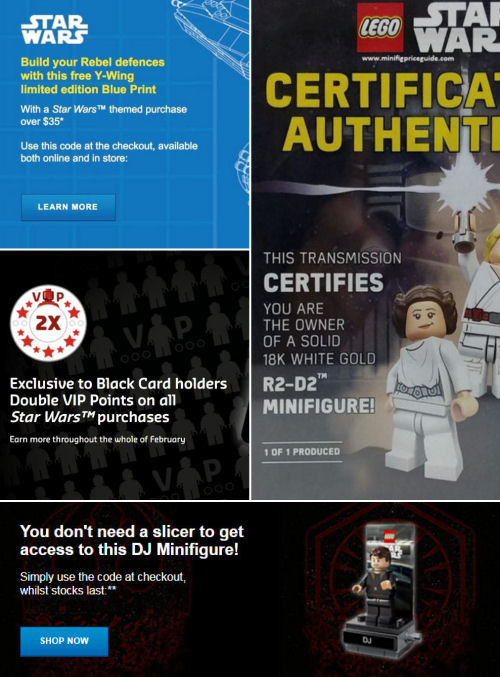 As subsequent coverage showed, the blueprint poster was not limited to Club 75192 card holders as regular shoppers were given the opportunity to buy them, and members were not over-enamoured with the 1:20,000 odds of getting the platinum R2-D2 figure either. A consolation prize of a DJ minifig was offered to Club 75192 members who made a LEGO Star Wars purchase through LEGO shop@home during a four day window at the end of June.

Since then the "full year of special Star Wars-themed offers" has failed to realise anything more, and recently - as observed by our Promobricks brothers - the limited edition VIP card information page (as archived by Rebelscum) has been quietly removed.

Regular readers will recall that LEGO declared there would be three types of promotions during 2018. With two already run and only one direct-to-consumer set scheduled between now and the end of the year - and is already available to pre-order for regular VIP members - it's hard to imagine how the "exclusive access" will be fulfilled.

We reached out to LEGO and one LEGO community representative told us that "I am not certain what they have planned or when their next Star Wars Black VIP Card only promotion will be but there should be more to come." Though this VIP programme is scheduled to run right up until the end of 2018 the expectations of the expectations of LEGO Star Wars collectors have yet to be met and fans are beginning to wonder if the whole affair is being quietly swept under the rug.

But a the end of the day it's worth reflecting on the fact that no-one bought the UCS Millennium Falcon just to get in to Club 75192, and ultimately anyone who is a member still gets to enjoy the beauty and detail of this 7541 piece set.