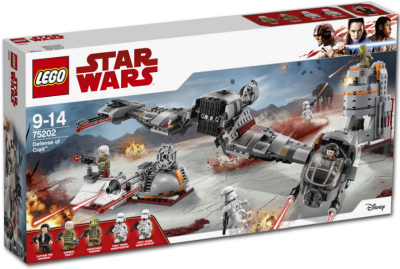 Prepare the speeder on skis to fight for the Resistance base against the forces of the First Order. Send the soldier to the laser cannon and other tools installed in the trench, and carefully monitor the movements of the enemy from the command tower.

Set the guns on the speeder on skis and check the engine serviceability. When the enemy approaches the base, put Poe into the cockpit and send him to perform another difficult mission. Fight for victory to the last, brave Resistance soldiers!

One of the earliest bases of the Rebellion this parched planet of pleasure is the site of a devastating battle between the First Order and the Resistance (which is not in anyway associated with the New Reoublic, cough).

The main feature of the set is the Ski Speeder, which we've seen in the trailer and in Hasbro form already so no great surprises in this open topped B-wing build.

Included minifigs are Captain Poe Dameron (back from his secret mission where he had to drop his rank?) with headphones, Admiral Ematt (sic?), a Resistance Trooper and two First Order Snowtroopers. The naming of these last two minifigs is odd considering Crait is salt covered.