A Look At The LEGO Staff X-maswing Starfighter
Posted by Jeremy on January 5, 2020 at 09:55 AM CST
Every year since 2008 LEGO has given their corporate, factory and full-time brand store staff an exclusive and unique set to thank them for their efforts through the year, and this year's is quite exceptional. 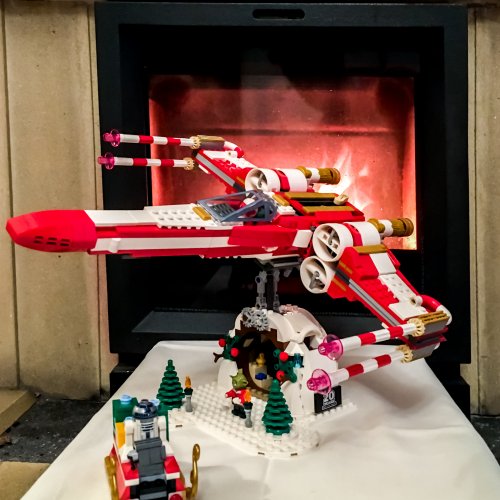 Quite often they are festive - like the 2010 Happy Holidays Christmas Game or the 40254 Nutcracker (2017), while others have marked important milestones in The LEGO Group's history, such as 4000007 Ole Kirk's House, 4002018 40 Years LEGO Minifigure and this year's 20th anniversary of the LEGO Star Wars license which was announced to staff through an internal intranet presentation at the end of November.

The broader LEGO community learned of the staff set when screen grabs and photos started to appear on the Internet a few days after, with staff posting their unwanted gifts on Bricklink, eBay and other secondary market sites. Rumours and scrappy images circulated for a couple of weeks and then LEGO's own Vice President of Design, Matthew Ashton, broke the silence with the official public reveal.

Not long afterwards the 500 or so members of the LEGO Ambassador Network programme got word that they would also be receiving this special set for Christmas too, bringing the total to around 17500 which, on paper, appears to be a considerable number but compared to the quantities associated with production sets, this is a mere single-digit percentage.

From the outside in this gift set is a demonstration of how highly LEGO thinks of its staff members. The box it comes in isnt the standard stock that general retail LEGO sets are packaged in but a thicker, double-layered card that incorporates a folding lid that fits securely, ensuring that the set is safe in transit and in storage.

The graphics on the box start with the same brick-on-brick textured images weve seen included in the non-The Rise of Skywalker sets during 2019, but in red and with an added sprig of holly here and there.

The artwork on the front of the box shows the candy-cane X-wing, Santa Yodas workshop and R2-D2 on a present-laden sleigh, while the back shows the same in its display configuration with a dedication in all the languages spoken at LEGO's facilities around the world.

Twenty years again a galaxy far, far away the LEGO Star Wars story began. We mark this remarkable anniversary with a special festive edition of the original X-wing Fighter. Enjoy!

Three instruction booklets and 1038 pieces - which any Star Wars fans would say is 100 elements too few - separates the start of the build from the finished model. 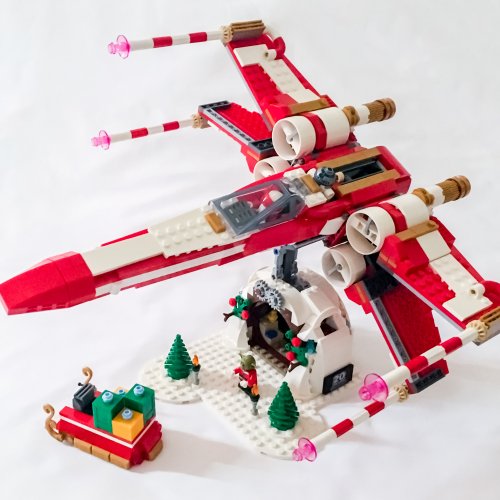 Composed of three elements - the festively coloured X-wing that on close inspection reveals to be a wholly new and original take on the iconic Rebel snubfighter, the Rebel personnel carrier-inspired sleigh and the igloo-like Santa Yodas Workshop that doubles up as a display stand for the Yuletide Squadron X-wing fighter. 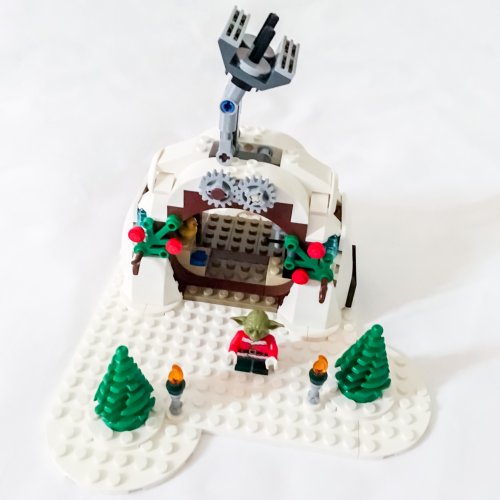 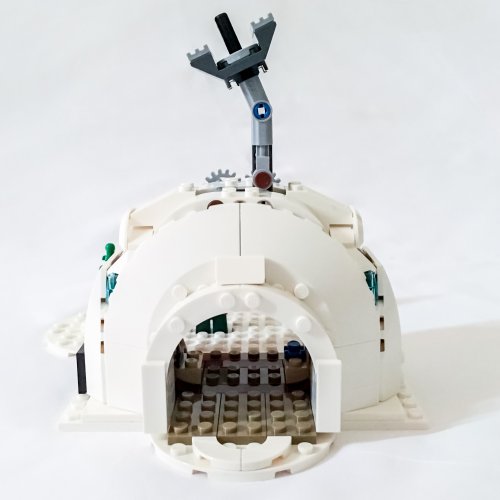 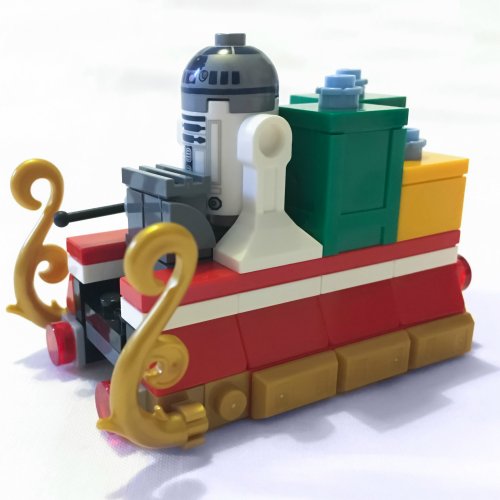 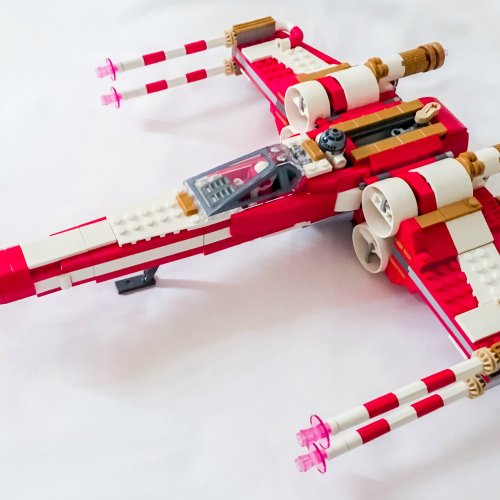 Of the three minifigures included with 400219 LEGO Staff Christmas 2019 Gift set, one is unique and one is exclusive. Though the 2011 LEGO Star Wars advent calendar did have a Santa Yoda in it this version has a unique torso print, and the Yuletide Squadron Pilot - aka Saint Luke - is totally exclusive to this set. 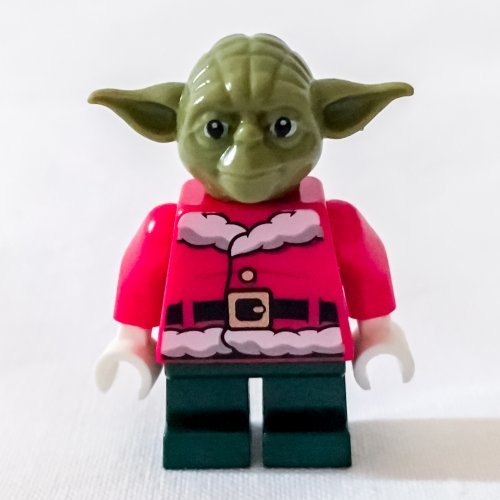 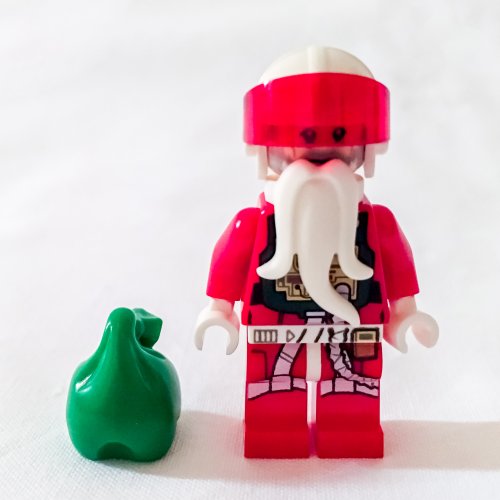 Its fair to say that LEGO missed a trick when they failed to give the third figure - the R2-D2 droid figure - a set of antlers to add a touch of festive spirit.

At no point has attention to detail been scrimped on - like the printed progress bar and the use of minifigures as pictorial guides in the instructions, the tiny drill press in the workshop or the wingtip candy-cane cannons - making this a worthy addition to the mantelpiece or a Christmas village scene.

Not being a production set 4002019 Christmas X-wing doesn't come with a preassigned price tag and its value has been determined by the market. Currently it attracts around $250 on Bricklink and on eBay a more substantial $350.

Curious about the (relatively) large-scale availability of these sets? Check out this post in Bricklink's forums for one answer. While some might prefer the traditional annual bonus cheque, at least LEGO rewards its staff with something better than a free year's membership for the Jelly of the Month Club.

If this is a little too expensive, or this candy-candied snub fighter is a bit too much for your collection then consider building your own micro-scale version by the very talented Pascal Hetzel to save money and space. The instructions and all 207 pieces of this down-sized version are available on Bricklink. With its piece count and size reduced, so to is the price - and you can expect to be able to spend around $17 (plus postage) for all the pieces to build this. 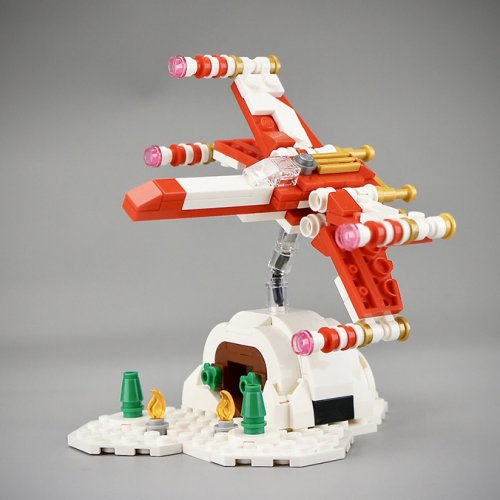 This special staff set also includes a supplement on how to break it down and pack it away for next year, and so with this being Twelfth Night (and the review) the Yuletide Squadron X-wing has been retired for the year. 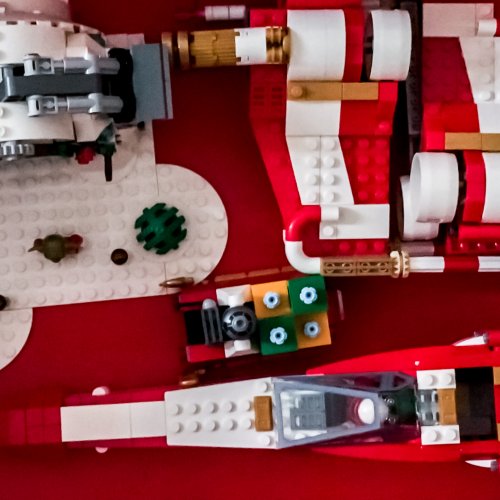