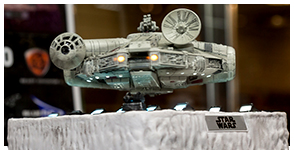 Fans can now bring home the fastest ship in the galaxy with this first of its kind figure that uses electromagnetic attraction and repulsion to actually make the Millennium Falcon float on air. The meticulously crafted design includes a high-quality metal casing showcasing steel like armor, an AG-2G quad laser cannon, and an Echo Base magnetic levitation base for the ship to float over.