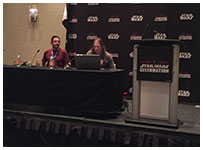 Celebration Orlando 2017 Collecting Track: Hallmark Collectibles
Posted by Adam on April 20, 2017 at 01:06 AM CST
Duncan Jenkins and James Burns took a break from their LEGO panel to talk about another passion of theirs, Hallmark Collectibles. Read on to find out what they discussed during the panel.

The panel began with a brief history of Hallmark, after it was pointed out that it has been two decades since the first Hallmark collectible was released, with the Keepsake ornaments that debuted in 1996, although greeting cards from Hallmark's Shoebox imprint had been released two years earlier.

Here's the breakdown of ornaments over the years:

1996 - The first Keepsake ornament were the Millennium Falcon X-Wing, TIE Fighter and AT-AT

1997 - C-3PO & R2-D2, Darth Vader and Yoda, with Luke Skywalker (Dagobah) being the first of the Collector's Series line

Attendees to this panel were also given one of several different Hallmark buttons.

The Rancor Keeper was the Star Tot given out at this panel, sponsored by Luis C. Natali and Yancy Baer.
SEND