E3: Lifesize LEGO Statue Of Han Solo Steals Show
Posted by Jeremy on July 17, 2019 at 11:45 PM CST
As show-stopping as the news that Traveler's Take is working on a new LEGO Star Wars video game - titled The Skywalker Saga - that will encapsulate the entire nine movie saga from The Phantom Menace to The Rise of Skywalker (due out in December, 2019) was, the accompanying floor display of a lifesize Han Solo in Carbonite minifigure stopped a lot of people in their tracks too. 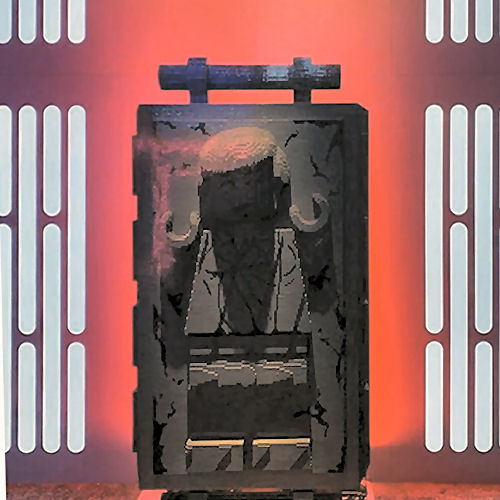 The sculpture was put together by the LEGO Model Team in Enfield, CT and is made from 49,735 individual LEGO elements, took 38 hours to design and a further 210 hours to build. At 8 feet (2.5 m) wide and 4 feet (1.25 m) tall, don't expect to hang it on your trophy wall though because at an estimated 135 lbs (60 kg) it'll need as many studs inside the wall to support it as are in the statue itself!

Checkout the timelapse construction of the statue in the video below!