LEGO: Australia Celebrates May 4th In Style
Posted by Jeremy on May 9, 2019 at 03:23 AM CST
Young and old Aussie Jedi got a chance to experience a once-in-a-lifetime opportunity over the May The 4th Be With You weekend when LEGO Australia hosted what is sure to be the best LEGO Star Wars 20th anniversary party of the year. 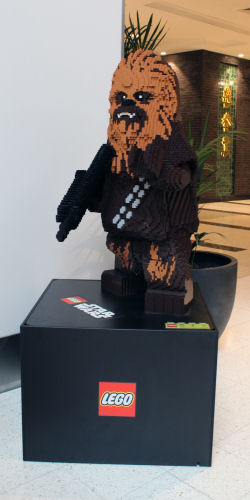 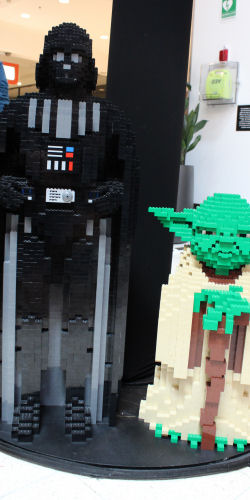 Not only did they have the world's largest LEGO box unwrapped before the eyes of an amazed crowd, but said crowd got to participate in building the set - a super-sized X-wing Fighter!

As a special treat, Jens Kronvold Frederiksen (the creative director of the Star Wars theme at the LEGO headquarters in Billund) and Ryan McNaught (aka The Brickman and the Southern Hemisphere's only Certified LEGO Professional) were on hand to make sure the build went smoothly.

The fun didn't stop there, because LEGO had a special display of every Millennium Falcon set, trivia contests for kids (no AFOLS allowed, shame!) and a Make & Take that was immensely popular - because who doesn't love free LEGO bricks? - and, later on during the weekend, a mock-up of a typical LEGO designers office through which Jens would take people on tours. 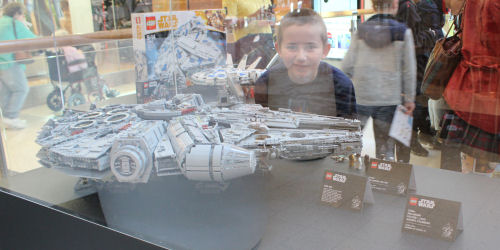 The premiere, e-ticket attraction of the weekend was the unveiling, unboxing and construction of the X-wing model, which was 16 times larger than normal. Such was the interest in what the giant box, set in the Westfield Chatswood shopping centre's events atrium, that crowds began to arrive at 9 am. An hour later a huge crowd had gathered and a number of children were selected to help rip off the boxes wrapping paper!


The scale of the event was impressive, with LEGO departments around the world working together to co-ordinate the giant model, archive display, special guests and activities. Turning to see the queue of people that the lure of the Make & Take alone had drawn in, it was hard to imagine that the weekend wasn't going to be anything less than a success.

The construction of the big-build took place over four hours, with children being randomly selected from the crowd or winning a chance by taking part in a trivia contest, to help assemble the X-wing Fighter.

The model, which was designed by the LEGO model team in Enfield, CT, was pre-constructed by a team of builders at co-host Ryan McNaught's studio in Melbourne. All told the giant model took 210 man-hours to get ready. In places, where the clutch power of the standard LEGO brick wouldn't be strong enough to hold the model together steel framework was included - contributing to the model's 250 kg (+550 lbs) weight.

As the 83442 piece build progressed, the appropriate page in the over-sized instruction book was revealed and the pre-selected kids were sent to collect the pieces from the giant LEGO box that formed both the backdrop and storage (and eventually the mock design studio). 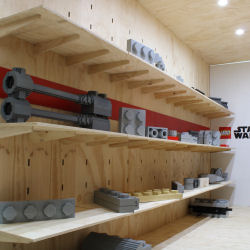 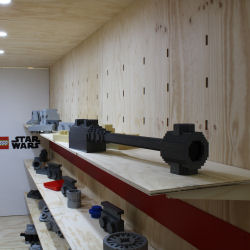 With the model's pieces - each made of hundreds of pre-assembled LEGO elements - in hand the participant would look to the open instruction book and then, under guidance from Jens and Ryan, carefully place the part on the model. The spectacle of seeing the huge LEGO pieces in such small hands was one of the most enjoyable aspects of the experience. 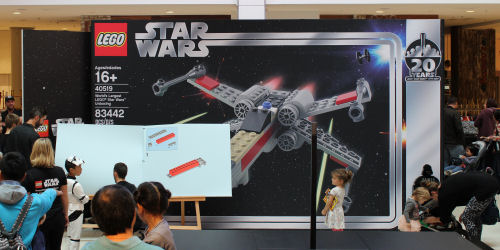 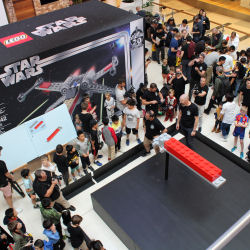 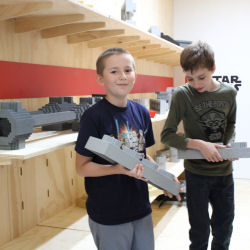 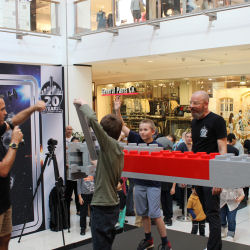 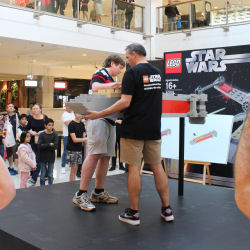 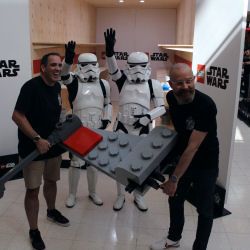 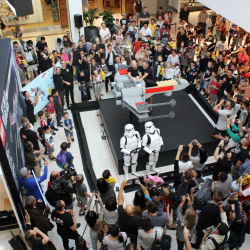 As the assembly of the X-wing Fighter got down to the final pieces the gathered crowd was whipped up to a fever pitch, so when Jens placed the last piece - just as he did at Celebration when LEGO achieved the Guinness World Record for the largest assembly of LEGO Star Wars minifigures - the crowd erupted in a mass cry of "May the fourth be with you!" as the giant round, blue stud that represented R2-D2's dome finished the build.

With all this taking place in the foreground, it's hard to believe that there were just as many people taking part in the activities that surrounded the stage. 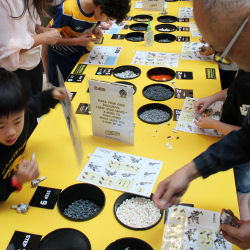 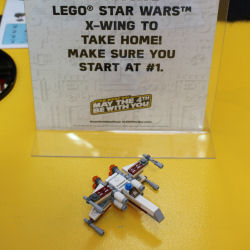 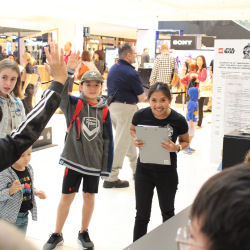 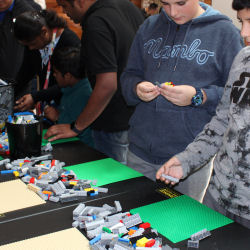 Drawing as many visitors as the big build, the Make & Take tables were consistently popular with over 100 people lined up at any one time to take their turn to make a mini X-wing Fighter. Also taking place at various times over the two day event were LEGO Star Wars trivia quizzes and LEGO building competitions with chances to win the latest LEGO Star Wars sets or the opportunity to add a piece to the giant X-wing Fighter that was slowly forming.

In the rare moments when the time table didn't keep him busy Jens, having flown in early to beat the jetlag, was full of his usual flair and spent time chatting with LEGO fans - some of whom had travelled interstate to attend the event - and answering their questions.

The day closed on a finished 2.5 x 2.5 metre (8 x 8 ft) X-wing Fighter and as the event crew tidied up the crowds drifted off to get some last minute shopping done before they headed home for their dinners and the next episode of LEGO Masters Australia. Overhearing a number of the still-enthused kids, it was clear that many would be returning and day two's audience would be just as engaged. 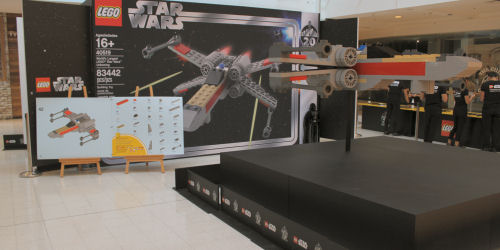 With a full schedule of meet and greets, hosting LEGO building workshops, conducting guided tours and giving multiple interviews, Jens's time was tight but he made the opportunity to talk with Rebelscum about his visit and the weekend's activities. 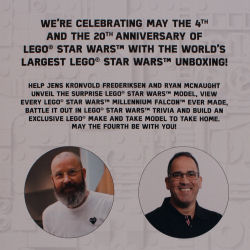 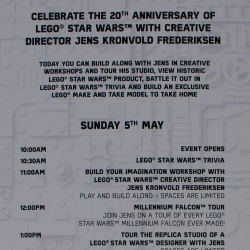 With this being Jens's first trip Down Under everyone at the party was making the most of this unique situation. To welcome him, Jens told Rebelscum, LEGO had booked him into a hotel in the historic Sydney suburb of The Rocks, where he could see the Harbour Bridge, Opera House and downtown skyline (all of which LEGO has immortalised in sets) and left a gift basket full of Aussie staples like Vegemite and Tim Tams to help him acclimatise.

The first thing I wanted to know was if he'd tried the local coffee. Sensing this wasnt a random question, Jens cast his mind back to the last time we talked - at Star Wars Celebration 2019 in Chicago - when we discussed his upcoming trip to Sydney. At the time his greatest fear was that he wouldn't find a good cup of coffee, which was an issue he was facing while in the USA. My reassurance that the great Australian flat white would do the trick hadn't fallen on deaf ears, because his response to my initial question was an affirmative, and said "It was alright." With that pressing matter put to rest we carried on with the interview.

RS: Have you enjoyed your time in Australia?

JKF: It was a bit of a short trip so it's very limited what I've seen. The event here has been absolutely fantastic. Everything has gone as planned, and we've all been overwhelmed with how many people have actually showed up.

RS: Was the big build a surprise for you or were you aware of what it was?

JKF: I was totally aware of what it was and was involved in the approval process.

Sharp-eyed LEGO fans will note that the number on the big box is 40519 - which turns out to be an unused set designator. LEGO let us in on the Easter egg: it's the just numerical the date for May 4, 2019!

With the chat we had in Chicago still fresh in our minds, talk naturally veered to Star Wars Celebration, which had been his first experience of the phenomenon.

JKF: There are a lot of similarities, actually, because it's so much about people's passion. And that's the same thing you experience at the big LEGO events. It's really that passion that everybody has and also, I think, whether it's Star Wars or LEGO, if it's one thing that bring people together, and people talking to people that they don't know just because they have the same passion for a certain thing... that's what fascinates me.

Having enjoyed himself at last month's Celebration, Jens admitted he is keen to attend more and hopes to go to Star Wars Celebration Anaheim 2020. And no, he doesn't know when it is either.


Did you have a special May The 4th Be With You experience? Maybe your local LEGO User Group put something on, or you went to a nearby LEGO store for their event - then we want to hear from you in our LEGO froums!