LEGO Star Wars: The Skywalker Saga Update
Posted by Jeremy on March 17, 2020 at 07:28 PM CST
When the news, via an official press release issued at E3 2019, finally shared the news that Warner Brothers Interactive Entertainment (WBIE) was going to complete the LEGO Star Wars video game series that started in 2005 members of the gaming, LEGO and Star Wars communites raised the roof with their cheers.

Giving little away, the press release shared a quick description of the game's scope, teased a few game-play elements, a handful of lavish screenshots and generally left us feeling pretty excited about the title's prospects. While the supported formats - PC, Xbox One, Switch and Playstation 4 - and price point were revealed, the game's release date was not, causing great consternation for prospective purchasers.

Looking back at previous LEGO Star Wars video game releases the likliest time of arrival was peggedto be a Q2 release, which would time well with the annual May The 4th be With You (aka International Star Wars Day) celebrations. This seems to have been supported by a reddit thread in which a photo of a Gamestop display stand was posted. Before it was taken down, the stand had dummied packaging announcing that April 20 would be the day of days. This seems to tie-in with the release of the new Buildable Model Helmet sets that have just been revealed. 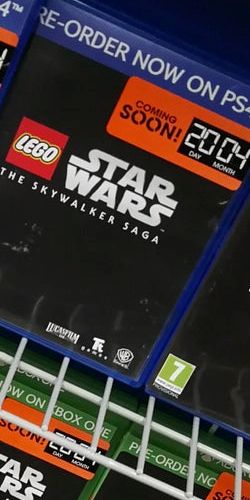 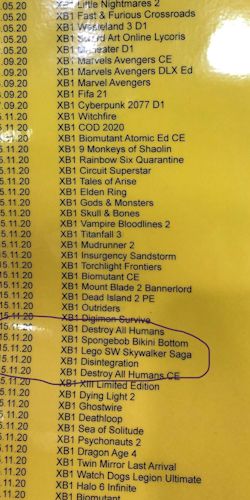 As solid as these indicators seem, they are still circumstantial. Adding further confusion to the story is a recent image that shows the 2020 release schedule for a number of games - including LEGO Star Wars: The Skywalker Saga. This shows that the game will hit shelves on November 15th, a date has no obvious connection to Star Wars, and isn't corroborated by Gamestop.com's listing.

Whatever the actual release date is, you can pre-order it now on four different formats from Amazon.com and Gamestop, as well as wishlist it on Steam, for $59.99.
SEND