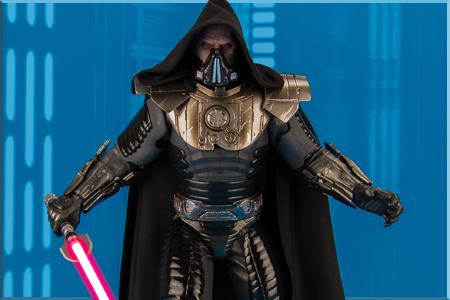 Since launching their Sixth Scale Star Wars line in 2005, Sideshow Collectibles has been very selective in which Expanded Universe figures they produce. At the point of this release, there have only been four other EU figures in the line, and the upcoming Darth Malgus is without question the best one offered so far. In fact, it is one of the most striking figures produced in the entire line.

It would seem that Sideshow is entering a new era of Sixth Scale with both product and packaging design. The Darth Malgus package, not unlike the Darth Vader we reviewed a couple of weeks back, is lightyears past the black and grey brand-unifying design we've seen on far too many products. In many ways, it is reminiscent of SSC's original wider packaging from their early years, with artwork that wraps around the entire box. The layout and artwork tell you that you are looking at something special. Whether you are a packaged or loose collector is irrelevant this time out as there are no parts sealed with tape. You can open and remove everything without altering the package or breaking any seal.

The Cut And Sew

There are only two cut and sew elements on the Darth Malgus figure; the body suit and the cape. The body suit is almost identical to the Darth Vader figure. The fabric has the same pressed stick look and functions in the same way allowing the limbs to have maximum articulation where not obscured by armour. In tone with the character's design, the bodysuit is cut from grey fabric. The cape is a light material, also matching the fabric on the Vader, and weighs perfectly off the figure's shoulders. This is greatly accented by the die cut, unheeded bottom. It's hood has a wire fitted in the seam to allow for customized fits both up or down. If there is one element of this figure that stands out, it is the cape.

Sideshow went all out with the armour design, perfectly matching it to the character. This does create limitations in the figure's possibility since the source is a video game character who's movements are not restricted by the laws of physics and to match the movement would compromise the aesthetics. While it doesn't hinder posing the figure in a menacing static pose, it does limit some more dramatic action poses since it is harder to find the balancing point, and that makes using the display stand essential for any action poses.

The finish on the metallic portions of the armor is some of the best paint work we've seen come from Sideshow in any scale. It looks lived in and battle worn. Sideshow used a few tricks to keep the aesthetic and posability in the knees and shoulders. The knee pads are made of a very soft pliable plastic and can be positioned over the bent knee, and the portions of armor over the shoulders are fitted on a ball-joint to allow them to move around the arms position.

The thigh armor and upper chest 'mantle' armor are attached with Velcro, giving collectors the ability to adjust the positioning a bit.

Even though the armor makes it difficult to take a look under the hood, Darth Malgus utilizes the Prometheus body with the muscle arms. it has leg extensions to capture the character's height.


The Head And Mask
The sample we received is the regular edition, so we can't really comment on the exclusive portrait, but we do know that it was not designed to fit the breathing mask, as the character didn't wear it until he was scarred.

The regular edition scarred head is a work of art. Just like the Premium Format Figure they produced earlier this year, Sideshow Collectibles nailed this character's face and pasty skin tone. The head wasn't molded in intrinsic plastic, so that is all paint, and we couldn't even guess how many paint applications it would take to create the level of detail we see on this portrait. From the glossy Sith eyes to the veins on his forehead, this is hands down the best job we've seen in this line so far.

The breathing mask fits snug on the scarred portrait and clicks into the back of the head at two points.

Darth Malgus comes packed with two lightsabers, the unlit hilt and the ignited hilt. Like the Vader, the blade is larger and more screen accurate in silhouette. Both versions of Malgus' iconic weapon features a removable silver pommel to allow it to fit into the figure's gripping hands, which have the thumb and middle finger attached for a tighter hold.

On the topic of hands, this figure comes with four sets of hands including fists, gripping, menacing flex, and Force pushing 'expressions'. Other companies producing 1/6 scale figures with switch out hands should take a closer look at Sideshow's approach and take notes. The SSC hands all feature built in ball-hinged plugs that fit tightly into the forearm yet are easy to pull out when it comes time to change them up.


Bottom Line
As we stated at the beginning, Sideshow Collectibles has moved into a whole new era with this line, and if the Darth Vader and Darth Malgus are any indication of what the future holds, minds will be blown. Looking at the details and level of accuracy, we wonder what they could do now if they revisited their 2005 figures


If you haven't pre-ordered this figure, you may very well be kicking yourself in the butt when you see it in person.