Photo Archive & Review: Sideshow Collectibles' Return Of The Jedi Darth Vader Sixth Scale Figure
Posted by D. Martin on December 13, 2013 at 04:04 AM CST
FOLLOW THIS LINK TO SEE THIS FIGURE IN OUR PHOTO ARCHIVE 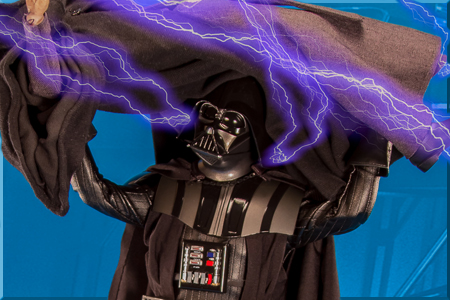 We've waited a long time for a new 1/6 scale Darth Vader figure, and now that the wait is over we are very happy with what was released. We knew that the creative team working on this figure were putting their heart and soul into its creation, and those efforts are all very visible in the little details.

Removing the shipping box, the packaging design was instantly recognizable. For the Star Wars collection the packaging may be new, but Sideshow's DC Comics Sixth Scale Joker figure was shipped in a box very similar to Darth Vader's a short time ago. Unlike the previous releases in the Star Wars line, the Darth Vader's package is a two piece box with a removable slide off front that reveals an inner graphic cover. The figure and its accessories are housed in two stacked clear plastic trays that are not all that different from other figures in the collection. Without any sealed plastic or taped portions, this figure welcomes even the most strict MIMB collectors to fully enjoy their purchase without effecting its value.

The art on the box itself is quiet nice, with an embossed Vader helmet on the front and a photo of the figure on the back. Thankfully Sideshow has bravely moved away from the glossy black and grey packaging design virtually every high end Star Wars collectible from every company has been sold in for far too long. Like most of their recent releases, the Darth Vader's box has a matte black finish, and simply looks sophisticated. If all future releases featured this packaging design, I'd be very happy and not just because it photographs better.

The Cut And Sew

Darth Vader is placed in its tray in such a fashion that the cut and sew elements aren't crumpled up, making the figure instantly displayable with minimal futzing. In fact, the only thing I needed to do was straighten the belt and codpiece, both of which rode up in shipping a bit. The jumpsuit is pretty different from the A New Hope Darth Vader. This time out, Sideshow crafted a fabric that featured a pressed texture instead of stitched lines for the suits quilting. The monster of all improvements on the cut and sew on this figure however is the cape and tunic. Both hang with the weight and flow like we've never seen in this scale. In images of the figure in a static pose, this Darth Vader could be mistaken for a 1/2 scale statue or even a full sized costume! This is because of how the cape hangs.

At first, when taking the figure out of the box, I was a bit put off by the cape for not having a hemmed bottom, but that apprehension was quickly put to rest when I spun the figure around and saw how well it hung off the figure. A hem would have negatively effected the way the cape hangs. It is much less noticeable in person than it is in photographs, which should come as a relief to some.

The helmet and chest armor are perfectly painted, and have just the right amount of gloss finish giving you all the light reflections you'd want. In fact, while shooting this figure, I had to put extra effort to reduce the light reflections. Some collectors may look for flaws in the proportions of the helmet, but I don't see an issue. I'm not a Darth Vader costume expert, but I am a massive fan of the character and life-long collector of cool Darth Vader stuff (my Star Wars collecting began the day I got the Darth Vader figure in April 1978) and it looks right to me. When I began shooting the figure, I went back to Return Of The Jedi film references and 501st Legion approved costumes, as well as Sideshow's 1:1 ROTJ statue displayed at the 2012 San Diego Comic-Con to make sure I was positioning all the little bits as close to the right places as possible, and I couldn't see anything in the sculpt that stood out as being off. In fact, in person, the helmet looks incredible!

The finish on the shin armour is also perfect. Even though this is a small detail, it is nice that it wasn't left open to interpretation. This armour isn't removable from the upper boot, but it fits so seamlessly that you'd think that the figure had one piece boots.

Sideshow has totally retooled their Darth Vader buck body, making it more stocky and proportionally correct. The arms are a bit skinny, but not as much as you would think when you look at film references. The one negative point with this figure is its height. Even though it is a bit shorter than the ANH figure, it is still too tall to be comparatively screen accurate when displayed with other figures in the collection. Is it forgivable? Yeah, but it would have been nice if it were just a touch shorter still.

The Light Up Features
The chest box and the belt light up! Yes, you already knew this, but when you flick the little switch on the battery pack on the belt, you will lose your mind. The green lights on the belt are bright and vibrant and the three red lights on the chest box flash in sequence just like the film-used costume.

The two display bases feature red light up accents. The Helmet display gives an ominous glow to the mask, which fits snugly in place under the dome. The figure display base's light up feature isn't as bright, so it creates a nice eerie Sith glow. Both bases are powered by AAA batteries, so they last for long periods of time and don't heat up.

The ignited Lightsaber doesn't light up. Considering the mess the Enterbay X Medicom Toy Corporation Ultimate Unison Luke Skywalker's light up Lightsaber ended up being, I'm not surprised other companied have walked away from producing similar products. Also, the blade on the saber is very different from the others released in the line. Judging by there images released this week of the Hoth Commander Luke Skywalker, Sideshow may be switching the Lightsaber design moving forward to be more like this one.

The Reveal Head And Mask
Let it be known that the mask was not designed to fit on the reveal head, and trying to force it on can damage the paint on the Anakin head. I found out the hard way that it wasn't meant to fit over the Ani head, and it was dumb luck that I got the image I did without damaging the paint. Will I ever try it again? Not on your life. I chock it up as another example of my continued willingness to break my toys so you don't have to break yours. (sideways happy face).

The reveal head looks badass, so I'm not certain if it was designed to be the face of Anakin Skywalker or Darth Vader, if you know what I mean. Personally I see Darth Vader in the sculpt. What it does look like is Sebastian Shaw, if he was still fuelled by the Dark Side of the Force. The details on the jaw portion of the mask is incredible. This piece is not meant to be removed from the head and after a few minutes of trying, I can tell you it is on their pretty good.

Bottom Line
The design is great, the execution is outstanding, the paint applications are outstanding, and the articulation is decent. All things said, this figure is so well done that it belongs in everyone's collections, even if it is the only 1/6 scale figure in the collection. When displayed on its base, the Darth Vader figure is suitable for display on your desk at work, in your living room, or in a key position in your Star Wars room. Now to try the cape and tunic on the ANH figure to see if I need to order a second Return Of The Jedi Darth Vader 1/6 scale figure!