runDisney: 3rd Annual Star Wars - The Dark Side Weekend In Review
Posted by Chris on June 7, 2018 at 03:28 PM CST
Apologies for the late post (sometimes work life just gets in the way!), but we definitely didn't want to miss reporting on what was one of the most fun official Star Wars events of the year. As usual, several Rebelscum forum members (pictured above) were on hand to take the First Order Challenge (from left to right - Gus Lopez (gus), Mike De Stefano (Kmsunrise), Elling Haug (Dark_Elling) & Chris Wyman).

The runDisney Health & Fitness Expo was moved from an older building to the newest building on site at the ESPN Wide World of Sports Complex which was fantastic. It had plenty of room to spread out the exclusive merchandise which we posted during that weekend right here. If you were one of the runners that opted to sign up for the Virtual Star Wars Half Marathon, you picked up your special Poe Dameron themed medal here at the Expo. 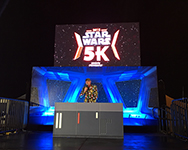 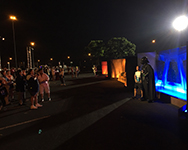 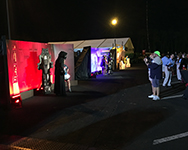 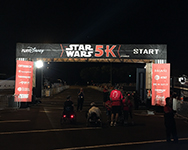 On Friday morning, it was the Star Wars Dark Side 5K which started promptly at 5:30am in the Epcot parking lot. For many, this is just a nice warmup for what's yet to come for the rest of the weekend. For others, it's their first step into a larger world and a great way to get your foot into the door of the running community. DJ Elliot was there all three mornings to get everyone excited and awake for a little exercise at 3:00am! There were also some great character photo ops to be had before making your way to the starting corrals (available all three mornings). For completing this race, runners received a First Order Stormtrooper Executioner medal. 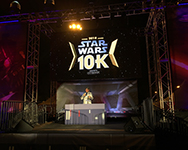 The Saturday morning Star Wars Dark Side 10K began at 5:30am in the Magic Kingdom parking lot and twisted through Hollywood Studios & Epcot. This is always a great race and has tons of awesome characters along the way. Nearly 11,000 runners completed this one and received a really nice Praetorian Guard medal at the finish line.

The Sunday morning Star Wars Dark Side Half Marathon also began in the Magic Kingdom parking lot at 5:30am and had runners making the long trip down to Animal Kingdom to run through the new Avatar land, back out and down to Hollywood Studios and then through Epcot ending in the parking lot. Very unfortunately, the weather took a turn for the worse and it really never cooled down the night before which made running conditions a little less than desirable. We were absolutely utilizing those water stations along the route! In the end, just over 15,000 runners completed the race and capped off an awesome Star Wars Dark Side Half Marathon Weekend and received a Captain Phasma medal! For those that completed the First Order Challenge, a special Kylo Ren medal was earned. If you completed both the Star Wars Virtual Half Marathon & The First Order Challenge, you walked away with the Kessel Run Challenge medal.

If you're interested in joining us for the next Star Wars themed race weekend, stay tuned for more details to be posted shortly.
SEND

Ever get sidetracked?
AFA collectors...do you have a minimum grade threshold and do you always stick to it?
The Bad Batch Crosshair (Imperial)
The Mandalorian (Beskar Armor) Legends in 3-Dimensions 1/2 Scale Bust
ESB - Boba Fett Legends in 3-Dimensions Bust
Darth Vader Jumbo Action Figure
Phoenix Board #203: Razor Crest Update? We need one