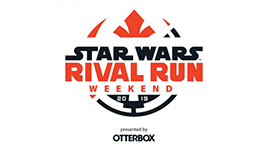 runDisney: Star Wars Rival Run Weekend Presented By OtterBox
Posted by Chris on June 7, 2018 at 04:44 PM CST
For the past four years, runDisney has produced at least one and sometimes two different Star Wars themed running weekends that were either celebrating the Light Side or the Dark Side of the Force. In 2019, everything changes! From the official site:

Choose your side for the Star Wars Rival Run Weekend presented by OtterBox, April 4-7, 2019 at Walt Disney World® Resort. It's an epic race event featuring some of your favorite Star Wars rivalries from across the saga, with distances geared for all skill levels. You won't want to miss your chance to be a part of this unique Star Wars adventure where you'll encounter characters from a galaxy far, far away along the course as you journey to the finish line to earn one-of-a-kind medals! Which side of the Force will you run for?

Just like in 2018, you'll have options to sign up for the Star Wars Rival Run Challenge which means running both the 10K & Half Marathon races for an extra medal. Should you choose to run the 5K, 10K & Half Marathon that weekend along with selecting the two-race challenge, and if you participate in the Star Wars Virtual Half Marathon in the first quarter of 2019, you'll walk away with six different medals and four different shirts! That's enough Star Wars loot to fill a space cruiser. We'll see you on the course!
SEND