AU News: UCS Falcon Coming To Mr Toys
Posted by Jeremy on December 25, 2017 at 03:29 PM CST
Even before the news that Toys "R"Us in France will be stocking 75192 UCS Millennium Falcon has got cold, we have news that Mr Toys - a chain of 23 toy shops in Queensland - is expecting an unknown number of the set in the next few weeks.

Though it is not listed on their website it does have an internal stock reference that notes a price of AU$1299.00, a mere AU$0.99 cheaper than LEGO online and their Certified Store in Queensland and Discovery Centre in Victoria - the only two official LEGO outlets in Australia - where is has a AU$1300 (approx US$1000) price tag.

A spokesman for Mr Toys explained that they had no knowledge of when the set would arrive or how many would be made available, as this was entirely in the hands of LEGO, but that it was expected in the "earliest part" of 2018. 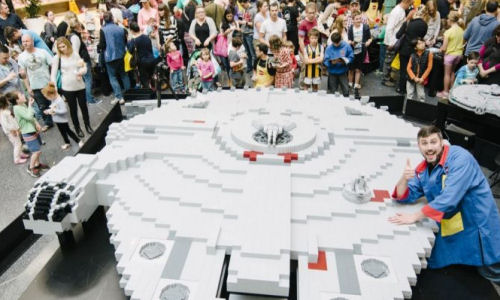 The last time the great public of Australia got up close and personal with a giant Millennium Falcon build was at the Westfield Southland building event in May 2015 when thousands of shoppers were able to help put together the monster construction. It is extremely unlikely that so many Australian LEGO fans will get their hands on the UCS set though.

While Mr Toys is limited to Queensland there is no reason to believe that the set is exclusive to this regional chain, and Rebelscum is reaching out to Australian toy contacts to find out more. Until it gets a broader release it is worth checking the Shop@Home webpage in case it comes back in stock.
SEND