LEGO: UCS Jabba's Sail Barge Exclusive?!?!
Posted by Jeremy on April 1, 2018 at 04:48 AM CST
Strange news has been trickling in over the last few months when we started to pick up on a few weird murmurings coming from the remotest corners of the LEGO community.

And to be honest we filed these in the "too strange" to be true folder, but their persistence and subsequent follow-up gossip has made us look back into our X-files - and we think that after putting some pieces of info together, laying some aside and giving the crystal ball a really good shake we have stumbled upon the biggest shake-up in the history of LEGO since they released up their first out-of-house license in 1999.

The initial rumour began not long after LEGO revealed their late 2017 Ideas spread with most members of the LEGO Star Wars community spruiking for a Cloud City set. Not all shared their belief in this expectation though, and certain parties whispered of something bigger, better and far, far grander. But no-one would break the silence.

Eventually a tidbit came our way: LEGO had reached out to a number of well-known (and seemingly discrete) AFOL set designers in an attempt to generate a new community design programme. As tempting as it is to drawn parallels with Chinese brick cloners working alongside AFOL builders to produce competitive designs, LEGO already had their LEGO Ideas platform to draw from and word from the inside was that instead of going down the long, drawn out review system route LEGO decided to expedite the process in time to get a particularly important set to market to mark an anniversary.

With this year being the 60th birthday of the patent that made the LEGO brick one of the world's number one toy most fans expected it to be something along these lines. Slowly but surely more strands to the story began to work their way to the underground network that enjoys collecting and sifting through the bricky gossip. Threads began to merge, forming a pattern that began to give us hope the 35th anniversary of the last Original Trilogy film would be marked. 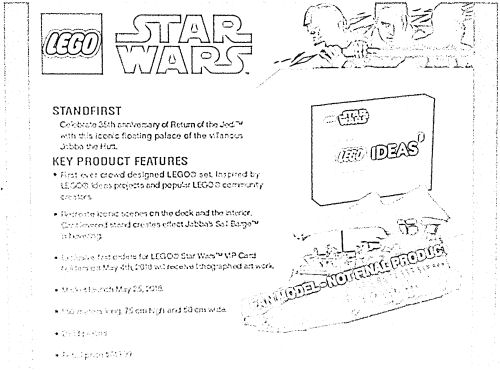 It wasn't long ago that we reached out publically and privately to a number of known and under-the-radar sources who had hinted at knowledge, and sure enough someone stepped forward with proof that ticked all the boxes: community sourced and designed, linked to a special occasion, and a hugely popular concept.

Close inspection of the above remotely hosted image points to it being a hybrid of LEGO Ideas and a crowd-sourced design project (the "proof of concept" build has been taken from BaronSat's gallery). It would also appear that LEGO have also drawn inspiration from Efferman's Vertical Stand for the UCS Millennium Falcon too to give the set a hovering effect. The price point and element count puts the price per piece on the $0.25 button, which is off trend. Hopefully the material in the photo is just a conceptual marketing brochure.

We have done as much digging as possible but many of our normal avenues of information came up dry. And while Rebelscum prefers to have at least three pieces of evidence before we present a scoop on this scale we decided that with the proximity of the May The 4th Be With You events and specials coming up we had to share.

It's hard to imagine that with the backlog of 75192 UCS Millennium Falcon orders they are still dealing with that LEGO would want to put something of this scale and cost on the market, or attach it the the struggling Club 75192 initiative. It's also surprsing that LEGO are announcing another UCS set so soon after the addition of 75181 UCS Y-wing to their 2018 line-up, but hopefully this the UCS Jabba's Sail Barge will see the up take that the HasLabs one earned.

As always, there is nothing official about this set until LEGO announces it. Hopefully soon. While you wait why not head to LEGOshop.com and peruse the stock that is currently available.

Rebelscum has just received a brand protection (aka cease and desist) warning from LEGO - either we are getting counter-punk'd by LEGO (note that it is currently 5:15 am on April 2nd in Denmark but only 11:15 pm of the 1st in Enfield, CT) or we have accidentally hit upon something and rather than let the community play it off to tomfoolery LEGO have decided to stop it in its tracks because it's real. 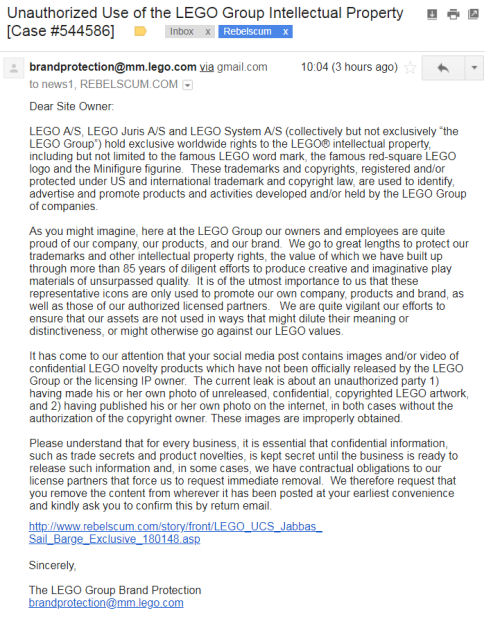 Time to fess up - this year it was a double dipped April's Fool joke. J and B, please step forward and take a bow for your hard work! 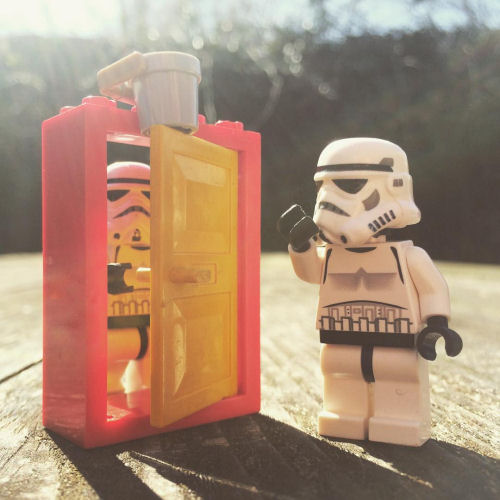