LEGO: New Y-Wing Coming? Part III
Posted by Jeremy on March 19, 2018 at 03:18 PM CST
As we creep closer to May our expectations of a big LEGO Star Wars reveal increase dramatically. This weekend's news of a polybagged Imperial TIE Fighter (30381) was enough to settle your curiousity so we present our third piece of evidence for the coming of a new UCS Y-Wing set.

This one comes in the form of a screenshot of a certain French Canadian retail website. While we are not able to share the direct link, nor the name of the retailer, we are permitted to dispense the pertinent information and this is the closest thing to confirmation we are going to get right now. Until LEGO steps in with a statement of course. 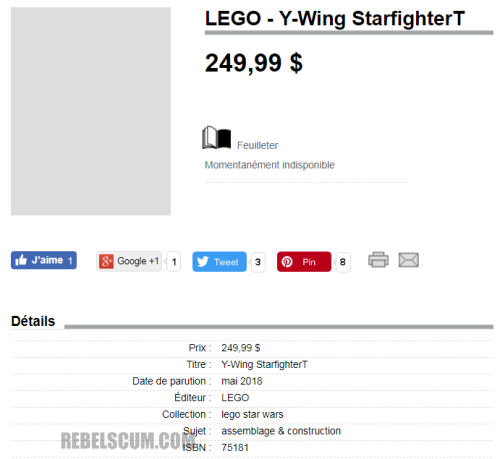 Previous pieces of information regarding the nature of set 75181 have included photos of new minifigs that have been circulating the secondary market, and a second-hand anecdotal statement from a LEGO employee regarding an internal catalogue.

The eagle-eyed of you will have noted that the disorted Y-Wing in the masthead has slowly (and intentionally) been getting clearer with each report. We believe that our next post will be word that LEGO has made an official confirmation that they are re-visiting this stalwart of the Rebel Alliance fleet.

Given how much Star Wars merchandise sales increase in May we should be getting an official confirmation any week now. So if the perfect timing of minifigs, leaked internal memos and intern goof-ups isn't enough, you can probably loosen your seat belt because you're not going to have to sit tight for long.