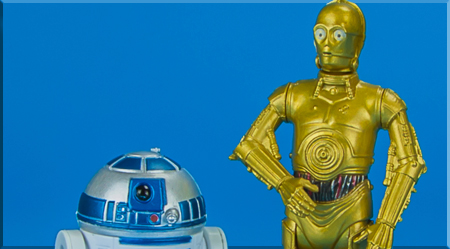 R2-D2 and C-3PO escape from the Rebel ship Tantive IV as it is boarded by Darth Vader and Imperial Stormtroopers. the Droids flee the ship in an escape pod that falls to the remote desert planet Tatoouine - and puts in motion an adventure that will change the galaxy forever.

The MS05 Tantive IV packaged action figures based on R2-D2 and C-3PO and was released as part of the second wave in Hasbro's Mission Series two pack collection. This wave also included the MS06 Mandalore set, which included The Clone Wars versions of Obi-Wan Kenobi and Darth Maul, and the MS07 Death Star set, which included A New Hope versions of Han Solo and Chewbacca. All three packs began shipping in the last weeks of 2013.

What's In The Box?
About The Figures
Related Figures

Back To Mission Series 2-Packs