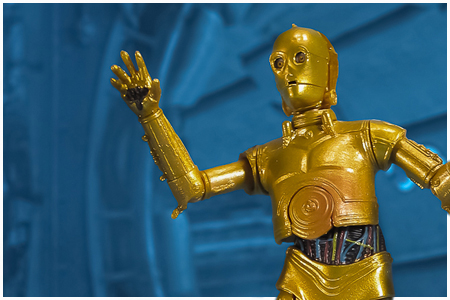 The Empire Strikes Back
If there is one figure in the The Vintage Collection that has to be opened to fully appreciate, it is the VC06 See-Threepio (C-3PO) action figure. The inner bubble design scrunches the protocol droid hiding his wired belly and making the figure look a bit odd. When taken off the blister and posed appropriately, collectors were quick to realize that this one-time peg warmer was in fact the best C-3PO action figure released to that point. The See-Threepio (C-3PO) figure features removable panels and limbs, and the most screen accurate sculpt. Combined with its perfect articulation, this figure has become a classic must-have piece in every loose collectors' collection.

Hasbro revealed four of the figures in the first wave of The Vintage Collection at the UK Toy Fair in January 2010, but the first wave, which also included new figures based on Dengar, Leia (Hoth Outfit), Han Solo (Echo Base Outfit), Luke Skywalker (Bespin Fatigues), the generic and very Kenner-esque AT-AT Commander, the first ever single carded Dack Ralter, (Twin-pod) Cloud Car Pilot and Darth Vader along with repacked 4-LOM and Boba Fett figures; wasn't fully revealed until the International Toy Fair the following month. This assortment began showing up in July 2010.