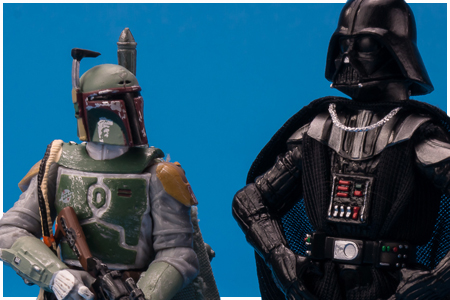 The Empire Strikes Back
Beyond product variations, there are two unique versions of the The Vintage Collection VC09 Boba Fett figure. The first, shown here was released in the first assortment in 2010. This version of Boba Fett is a repaint of the 2008 30th Anniversary Collection Boba Fett from The Fett Legacy Evolutions three pack. Like the original release, the figure sports the armor he wore in The Empire Strikes Back. After its initial release, Hasbro altered the deco on the figure to make it more screen accurate. In 2011, Hasbro released a Return Of The Jedi version of Boba Fett but kept the VC09 number.

Hasbro revealed four of the figures in the first wave of The Vintage Collection at the UK Toy Fair in January 2010, but the first wave, which included new figures based on Dengar, Leia (Hoth Outfit), Han Solo (Echo Base Outfit), Luke Skywalker (Bespin Fatigues), the generic and very Kenner-esque AT-AT Commander, C-3PO (See-Threepio) with removable panels, the first ever single carded Dack Ralter, (Twin-pod) Cloud Car Pilot and Darth Vader along with repacked 4-LOM and Boba Fett figures; wasn't fully revealed until the International Toy Fair the following month. This assortment began showing up in July 2010.