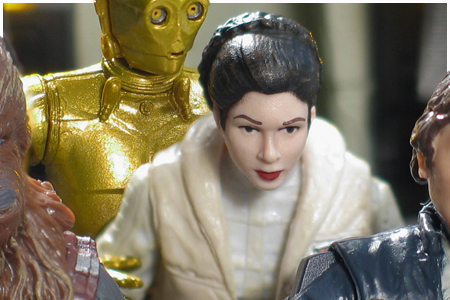 The Empire Strikes Back
When released, The Vintage Collection VC02 Leia (Hoth Outfit) instantly became the best figure released of the fiery Princess in this costume. For the first time in the modern line, Hoth Leia was scaled correctly, and actually captured the character perfectly. The twelve points of articulation, highly detailed sculpt and perfect paint job made this figure an instant classic.

Hasbro revealed four of the figures in the first wave of The Vintage Collection at the UK Toy Fair in January 2010, but the first wave, which also included new figures based on Dengar, the first ever Han Solo (Echo Base Outfit), Luke Skywalker (Bespin Fatigues), the generic and very Kenner-esque AT-AT Commander, C-3PO (See-Threepio) with removable panels, the first ever single carded Dack Ralter, (Twin-pod) Cloud Car Pilot and Darth Vader along with repacked 4-LOM and Boba Fett figures; wasn't fully revealed until the International Toy Fair the following month. This assortment began showing up in July 2010.

In the U.S. all eleven figures shipped with starburst stickers on the card front and pamphlets in the blister for a mail away Kenner style Boba Fett figure with a rocket-firing feature. In Canada, the initial release, which was found only at Walmart stores, didn't have the offer, so there were no stickers or pamphlets included. By the time the figures hit Toys "R" Us Canada, however, the offer was included. For whatever reason the stickers misspelled Fett's name as 'Bobba'.
U.S. Product Packaging
North American Tri-Logo Product Packaging
2019 Photo Real Rerelease
Armed with new revolutionary paint application procedures, Hasbro went back to four action figures from The Vintage Collection's first year of products that didn't see International distribution when they were hitting shelves in North America. The VC02 Princess Leia Organa figure featured below shipped with VC03 Han Solo, VC08 Darth Vader, and VC23 Luke Skywalker (Endor) in April 2019. All four figures are on updated cardbacks, but each retains its original VC number.