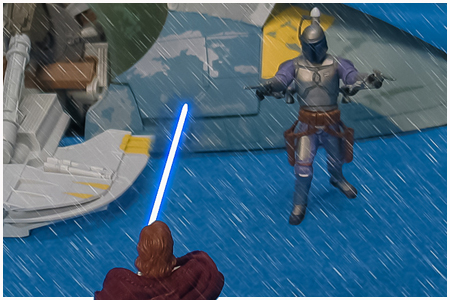 Attack Of The Clones
The VC34 Jango Fett from the fourth wave of figures in The Vintage Collection gives collectors virtually everything you could ask for in a Jango figure. The figure itself is a retooling of the Jango Fett figure included in The Fett Legacy Star Wars Evolutions three pack form 2008. This time out Hasbro created new forearms that featured the gauntlet blades seen in the duel with Obi-Wan Kenobi in Attack Of The Clones.

The fourth wave of action figures in The Vintage Collection focused on the characters and costumes featured in Star Wars Episode II: Attack Of The Clones. The assortment which also included the all new VC29 Kit Fisto, the all new definitive VC30 Zam Wesell, the repacked VC31 Obi-Wan Kenobi, the much-needed updated VC32 Anakin Skywalker (Peasant Disguise), the debut VC33 Padmé Amidala (Peasant Disguise), the retooled VC35 Mace Windu, the kit-bashed VC36 Senate Guard and the repainted VC37 Super Battle Droid was the first to be released without a special send away offer form or sticker. Of all the figures in this wave, only the VC31 Obi-Wan and VC34 Jango figures were repacked in future assortments, and as such only these two figures can be found with send away offers.
U.S. Product Packaging
North American Tri-Logo Product Packaging