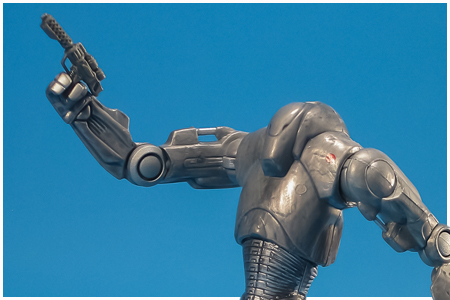 The fourth wave of action figures in The Vintage Collection focused on the characters and costumes featured in Star Wars Episode II: Attack Of The Clones. The assortment which also included the all new VC29 Kit Fisto, the all new definitive VC30 Zam Wesell, the repacked VC31 Obi-Wan Kenobi, the much-needed updated VC32 Anakin Skywalker (Peasant Disguise), the debut VC33 Padmé Amidala (Peasant Disguise), the slightly retooled definitive VC34 Jango Fett, the retooled VC35 Mace Windu and the kit-bashed VC36 Senate Guard was the first to be released without a special send away offer form or sticker. Of all the figures in this wave, only the VC31 Obi-Wan and VC34 Jango figures were repacked in future assortments, and as such only these two figures can be found with send away offers.
U.S. Product Packaging
North American Tri-Logo Product Packaging