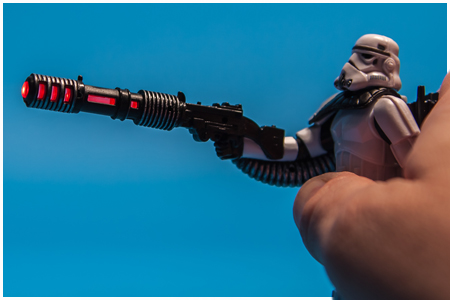 Light-up Blaster
Even though the figure saw wider release on the 2013 Yoda Carded Movie Heroes collection, the 2012 MH23 Sandtrooper featured a unique paint design. It can be argued that the 2013 version corrected the inaccuracies in the the original releases paint scheme, but with both versions having a very limited release, most collectors are just happy to have one or the other. The variation wasn't spotted until the MH23 version stopped shipping however, and time may prove that this version is more sought after.

The last wave of figures in the 2012 Movie Heroes line first showed up in Europe in the fourth quarter. North American collectors kept their hopes up, but as we moved into the new year, it became apparent that this assortment, which included MH19 Anakin Skywalker, MH22 Battle Droid, MH23 Sandtrooper and MH24 Boba Fett, was not going to arrive at the local toy stores.
European Tri-Logo Product Packaging