The greatest lightsaber battles of all time are in Episode III! Bring these incredible battles to life with the NEW Battle Arena assortment, which pits Jedi warriors against the evil Sith and other foes.

Just move the levers for real head-to-head lightsaber action ? the battle continues until one figure is knocked over! Arenas can interconnect with each other, or attach to the Mustafar Duel playset (sold separately) to create the ultimate battlefield! 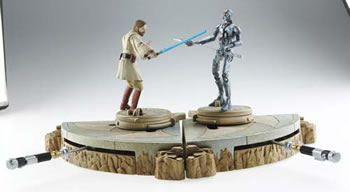 Anakin Skywalker vs. Count Dooku
Re-live the incredible battle between two of the most powerful Jedi of all, as they fight to the finish on the Trade Federation Cruiser! Only the strongest Jedi remains ? will it be the light side or the dark side of the Force? 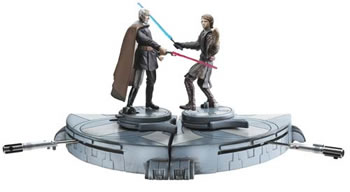