ROTS Preview: Large Vehicles
Posted by Jay on March 2, 2005 at 01:26 PM CST
Celebrate the release of Episode III with these awesome vehicles that are straight from the thrilling new Star Wars adventure.

Republic Gunship
The Republic gunship is a powerful combat vessel used by the clone troopers. Its transport bay can carry large numbers of troops into battle, deploying them through the side doors and with the drop-off landing base. Outfitted with an impressive arsenal of weapons including ?laser? cannons, chin guns and missiles, the gunship is one of the Republic?s main fighting vehicles in the Clone Wars.

This is more than a vehicle ? it?s a playset! Open the canopy and place up to two figures (sold separately) inside, or lower troops down the rappel line. Fire the real working missiles against droid armies, or activate the drop attack when you?re in position over enemy lines. 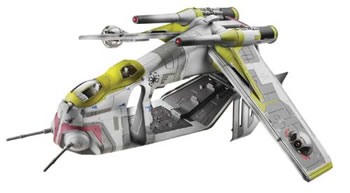 ARC-170 Fighter
The ARC-170 (Aggressive ReConnaissance) fighter blasts into battle! Clone troopers are specially trained to serve aboard these attack and recon vessels. The ARC-170 carries a crew of three and has an astromech droid to handle in-flight operations. The well-armed fighter lives up to its name as an aggressive vehicle against the Separatist forces.

The release of Revenge of the Sith is less than six weeks away. While you wait, feast your eyes on the newest deterrent to Separatist forces. This fighter is loaded with action features, like cannons that fire working projectiles, adjustable wings, a droid slot and proton torpedoes. 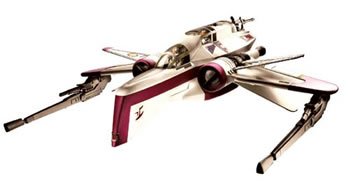