ROTS Preview: Collection 1
Posted by Jay on February 23, 2005 at 07:12 PM CST
These Collection 1 action figures capture the drama of Episode III and return you to the familiar excitement of 3.75? scale adventure ? a thrill pioneered by the original Star Wars line of the 1970s. Each finely detailed figure in this first wave features a cool working attack or accessory with action feature!


Obi-Wan Kenobi
Obi-Wan Kenobi is a Jedi Master and a General in the Clone Wars. He embarks on a dangerous mission to stop General Grievous in an attempt to bring the war closer to an end. Figure features Slashing Attack action And comes with two snap on hands ~ one with a lightsaber attached for slashing action and one without a lightsaber for posing.

Anakin Skywalker
Anakin is now a full Jedi Knight and his heroic feats have made him a hero throughout the Republic. He is lured to the dark side of the Force by promises of unlimited power. Figure features Lightsaber Attack action. And comes with two snap on hands ~ one with a lightsaber attached for slashing action and one without a lightsaber for posing.

Yoda
The wise Jedi Master Yoda leads the Republic?s clone army into battle on the Wookiee world of Kashyyyk. He is assisted in this fateful mission by mighty Wookiee warriors Chewbacca and Tarfful. Figure comes with missile-firing cannon And lightsaber. 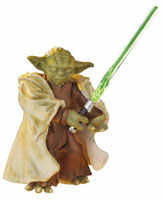 Super Battle Droid
Manufactured by Count Dooku, the tough, deadly and durable super battle droids are used by the Separatist forces in battle. These droid armies clash with the clone troopers throughout the galaxy. Figure features firing arm-blaster action.

Chewbacca
The Wookiee warrior Chewbacca battles beside fellow warrior Tarfful to save their home planet from the invading Separatist forces. Yoda leads the courageous fight to save Kashyyyk from domination. Figure features Wookiee rage action and comes with  bowcaster.

Clone Trooper
Clone Troopers are the genetically engineered soldiers that are the Grand Army of the Republic. They are sent throughout the galaxy to fight the droid armies that belong to the Separatist forces. Figure features Quick-draw Attack action And comes with blaster.

R2-D2
The feisty droid R2-D2 is assigned to serve Anakin Skywalker in the Clone Wars. Seated in the droid socket of Anakin?s Jedi starfighter, R2-D2 is witness to dramatic events that will change the galaxy. Figure features Droid Attack action And comes with launching battle base. 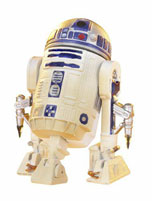 General Grievous? Bodyguard
General Grievous is surrounded by droid bodyguards. They protect the commander of the droid armies with impenetrable electrostaffs as the Republic forces attempt to stop this dangerous and deadly enemy. Figure features cool Battle Attack action and comes with staff.

Darth Vader
Giving up everyone and everything he cares about, Anakin falls to the dark side. Encased in the black armor that will come to strike fear throughout the galaxy, he is no longer Anakin Skywalker?he is now Darth Vader. Figure features Lightsaber Attack action And comes with lightsaber.