LEGO Polls By The Numbers
Posted by Jeremy on February 16, 2020 at 04:32 PM CST
Fans of Star Wars and polls are no strangers to each other and go back as far as the summer of 2000 when Hasbro ran their first Fan's Choice action figure poll. Hosted on a number of Star Wars collecting community websites, readers were asked to vote for either Amanaman, Bom Vimdim, Eeth Koth, Ellorrs Madak (who won) or Teemto Pagalies to be made into a 3-3/4" action figure as part of their Power of the Jedi line, which filled the gap between 2000 and 2002.

It wasn't until 2003 that LEGO got in on the action, with a poll run on their now-defunct My Opinion platform. During the first quarter of the year, fans were given a choice of the Ewok village from Return of the Jedi, a Tatooine playset, a bust of a Clone Trooper, Sandcrawler with Jawas and droids, and the Death Star. The sands of time have erased this exercise from the Internet, and not even the WayBackMachine archived a copy of it. The only known surviving record is a discussion thread in our own LEGO Star Wars forums, where it is still preserved for posterity.

Though more of a survey rather than a poll, a sidebar in an interview with Jens Kronvold Frederiksen - who was a lowly Senior Product Designer on the LEGO Star Wars team at the time - published during Summer 2005 gave readers a chance to interact with LEGO by voting on future models. 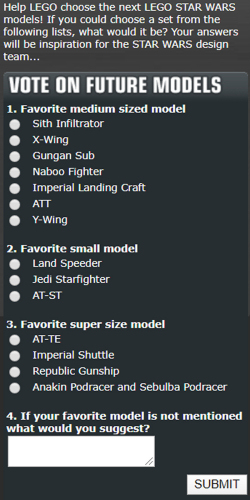 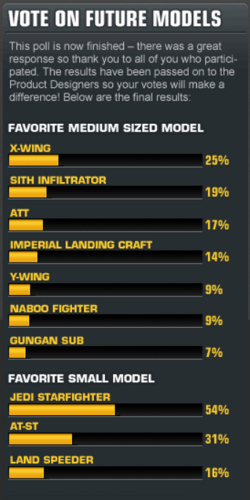 Rather than presenting actual concept models or suggesting specific sets, the poll provided voters with a broad sweep of options. The results, which were shared in October, showed that contemporary models based on Revenge of the Sith, which had been released earlier that year, were the most popular.

There was no obvious, or immediate, product development outcome as a consequence of the poll, though over time each of the options was realised in one form or another.

For one week during the summer of 2006, Star Wars fans were given the opportunity to vote on four potential sets and pick the Ultimate Collector Series model for 2007. Promoted as a cross-community fan poll, all registered (free and subscriber) members of starwars.com got to vote for large scale versions of FX-6 (Darth Vader's medical droid), a Trade Federation vulture droid, R2-D2 or a motorised AT-AT. 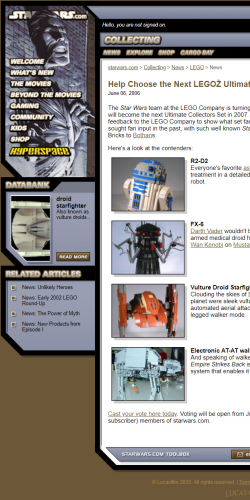 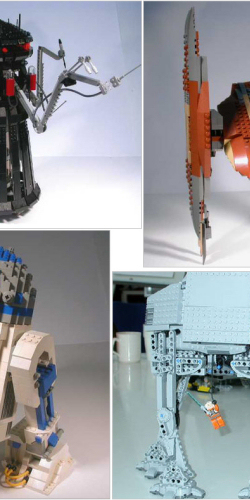 Though the official results of the poll were never announced, by early 2007 fans had begun to suspect what the winner was when word of a new and self-propelled AT-AT began to circulate. The final outcome made its first public appearance at the inaugural Celebration Europe during June 2007, though 10178 Motorized Walking AT-AT didn't actually reach LEGO branded store shelves, where it was an exclusive direct-to-consumer product, until early October.

Incidentally the upscaled prototype R2-D2 model, which was closely based on the Target competition in 2000 and a spend-to-enter sweepstakes run by Toys "R" Us in 2005, would later emerge as the Ultimate Collectors Series set 10225 R2-D2 in 2012, showing that no good research goes to waste.

For the 10th anniversary of their Star Wars line, LEGO and Toys "R" Us teamed up in May 2008 for what - at the time - was their most audacious online fan poll. No concept models or explanative descriptions were provided to influence the vote so fans had to choose from the simply worded Choice 1: The Arrest of Palpatine, Choice 2: Slave I and Cloud City Landing Platform and Choice 3: Mon Calamari Cruiser Set (Cruiser control room and hanger with A-wing). With only their imagination to guide them in their decision, many lively conversations erupted on the topic.

The winning option - Mon Calamari Cruiser Set - was revealed in October and as, as 7754 Home One Mon Calamari Star Cruiser, exclusively reached Toys "R" Us shelves over the course of the summer of 2009. The other two options would later be released as 8097 Slave I (2010), though without the landing platform, and 9526 Palpatine's Arrest (2012).

Following the 10th-anniversary fan's choice poll there was a gap of eleven years, and it wasn't until January 2020 - and missing the chance to include it as part of the 20th anniversary of the LEGO Star Wars license - that LEGO used their Ideas platform to let their most enthusiastic followers have input into an upcoming Ultimate Collector Series set. 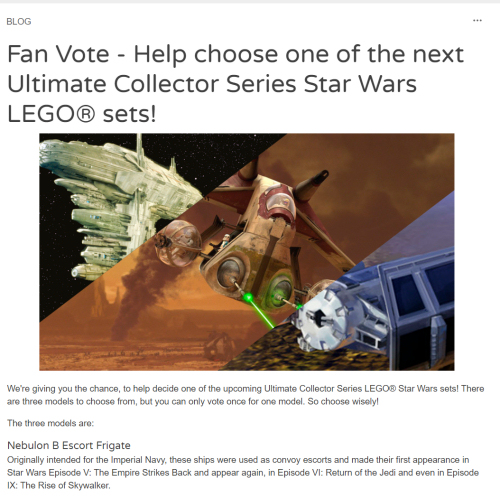 With three models - the Nebulon-B medical frigate, LAAT/i Republic Gunship and Imperial TIE Bomber - to choose from voting lasted a week (January 23rd to 30th) with proponents of each option heading to their favourite discussion forums and social media platforms to spruik for their pick. Despite having a great deal of exposure to fan fervour the LEGO Ideas team were taken aback by the attention it received, declaring it the most popular Fan Vote ever ran on Ideas.

In a result that surprised the Original Trilogy fan base it was, with over half the votes, the Republic Gunship that carried the day. 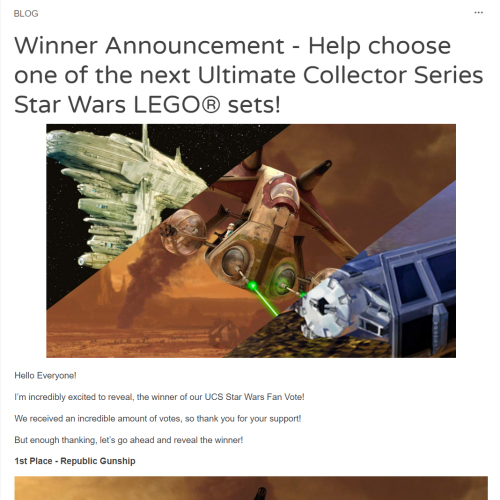 Wanting to keep a tight lid on the project the LEGO Ideas team's only statement on the outcome was judiciously evasive.

"we cant reveal many details now, but the Republic Gunship WILL be one of the next UCS Star Wars sets. Its time for the designers here at LEGO Group to get designing! And I imagine watch Star Wars Episode II: Attack of the Clones to refresh their memories."

While there's no official word on when UCS Republic Gunship will be released, those fans with an understanding of the product design and development timetable at LEGO are pinning a note to the October page of their 2021 calendar.
SEND