LEGO: Solo TV Spot/Teaser Breakdown
Posted by Jeremy on February 5, 2018 at 09:38 PM CST
Just before Christmas came the biggest LEGO leak ever - it was as if the North Sea flooded Denmark,swept through the LEGO office in Billund and carried off all their most important secrets - because in one day we discovered the set names, and then scooped photographic proof (which we had to remove though others still flaunt), of the following sets: Now follows the release of the first TV spot (Feb 4th) and teaser (Feb 5th) for Solo: A Star Wars Story - if you haven't seen it yet then head to youtube.com/starwars and get up to speed before you continue.

All caught up? Good. So which of the not-yet-officially-confirmed sets that we know about were seen on the TV spot and teaser?

Unlike the trailers for The Last Jedi we know less about the leaked sets than we expected.

The shot of an Imperial Star Destroyer travelling through a gassy tunnel - possibly part of the route of the Kessel Run - tells us that capital ships of the Empire's fleet are present. The last Imperial Star Destoyer set (75055 has been retired for a year or so now, and the available 75190 First Order Star Destroyer doesn't fit the bill so if there is onboard action then there's a good chance LEGO will release one in the future. 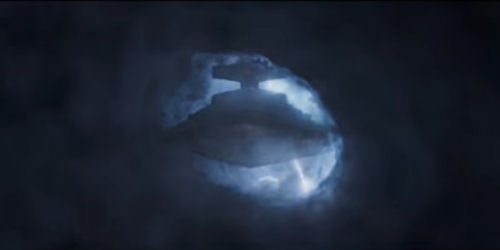 Though we already know that 75211 Imperial TIE Fighter set is coming we were treated to a new TIE variant in the teaser/trailer. Only seen briefly, this twin-panneled fighter had a smaller side pod and was flanked by two standard TIE Fighters. LEGO knows we love TIE Fighters so expect to see one of these. 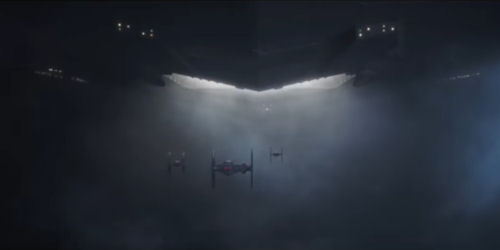 Several quick shots reveal at least two different souped up speeders, which can be identified as two new LEGO sets: 75209 Han Solo's Landspeeder and 75210 Moloch's Landspeeder. No sign of any Corellian hounds yet. 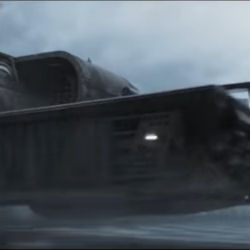 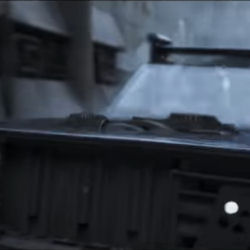 Now that Millennium Falcon, by James Luceno, has been downgraded to Legends status, the origin story of the galaxy's most well known YT-1300 light freighter is up for grabs, and the shot of the gleaming white padding in the umbilical corridor attests to the fact that her checkered history has been wiped clean. The latest confidentially marked LEGO imagery of 75212 Kessel Run Millennium Falcon has her with splashes of blue detailing, a single hull-mounted cannon, an inferior communication dish and the space between the cargo mandibles filled in (photographs of Chinese knock-offs of this set show that this is removable). 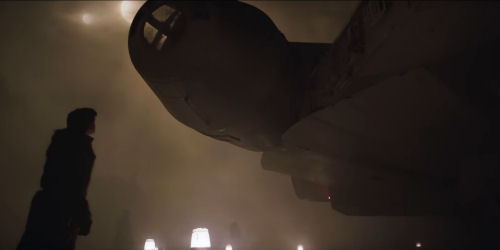 The exciting - but brief - glimpse of the presumably Imperial monorail transport has potential for a new motorised set that has got LEGO monorail enthusiasts sitting up and hoping. The blaster fight between Tobias Beckett and an armoured assailant is pegged to be part of the "Nemesis Gang", which is expected to be tagged to set number 75215. 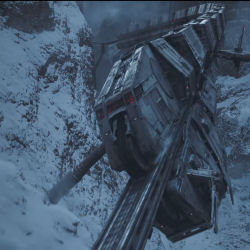 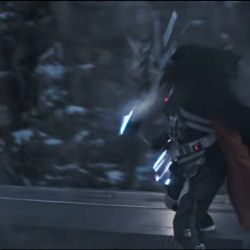 On top of the aforementioned Corellian hounds, which are found in both speeder sets, we still haven't seen 75207 Imperial Patrol Battle Pack nor Rebolt, Moloch or neither the Range or Mimban Trooper. Typically battle packs are created by LEGO to provide a small assortment of minifigures and it wouldn't be totally surprising if we only got a glimpse of the Imperial speeder, which we know exists from location footage of Solo being filmed in the UK.

Additional shots displayed Qi'Ra in the same outfit (less jacket) that her minifig wears in 75209 Han Solo's Landspeeder, a pimped up Lando Calrissian in a (hopefully not Wookiee) fur jacket that doesn't currently have a known LEGO minifig counterpart and a number of droids and aliens. The pickings are rich!

Within 24 hours we were treated to an 1 minute and 44 second teaser - so what did the extra information did the almost-three-quarters-of-a-minute give us?

Right out of the gate we jumped into a street race with plenty of shots of the vehicle that is depicted in 75209 Han Solo's Landspeeder (though occupied by qi'Ra in the same style of clothing that her minifig in 75212 Kessel Run Millennium Falcon is wearing), followed by the speeder in 75207 Imperial Patrol Battle Pack. It looks much sleeker than the LEGO version though, and there is no sign of any pursuers on foot so our hunch that the "battle pack" aspect of this set is contrived to add extra minifigs. Cool! Following the pair is a third speeder which can only be Moloch's, but there aren't any glimpses of either occupants so we have no idea what the minifigs in 75210 Moloch's Landspeeder actually look like.

An atmospheric montage is followed by a sequence of heat shots that include Tobias Beckett in his TV spot clothing, a very martial - yet regal - Qi'Ra descending from what is more than likely the Millennium Falcon, Lando Calrissian in his yellow capped 75212 Kessel Run Millennium Falcon wardrobe, the un-named chacater played by Thandie Newton, a small Simian-like being that I'm sure we all thought was Maz Kanata on first play through, and finally Chewbacca.

Next comes a series of location shots which lead us to a good look at the "Nemesis Gang" and their leader, the armoured assailant from the top of the Imperial monorail in the TV spot. 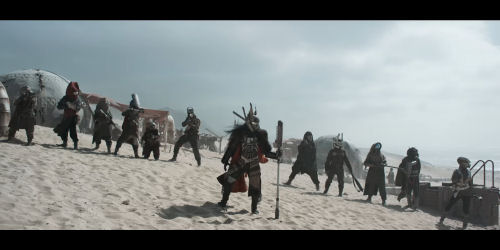 Following a number of intrguing action shots we get a peek at what may be the "Nemesis Gang" swoops pulling off a heist while Han Solo wrestles the controls of heavy hauler that looks to be having its load boosted by the previously mentioned swoops. Could this be one of the rumoured sets that are being talked about in hushed tones? 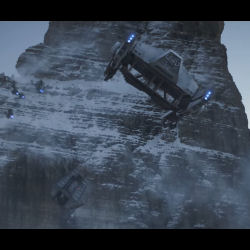 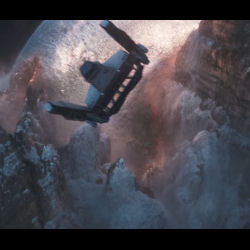 And then we are treated to a bunch of clips with the Imperial Star Destroyer and TIE Fighters (plus the new variant first revealed in the TV spot), before finally getting a good look at the Millennium Falcon and a wholebunch of crazy, fly boy action. Sadly this only gives is a quick look at the Falcon's new blue and white livery but we get a broken glance at a new and terrifying creature whose Gorgon-like tentacles attack our heroe's fleeing craft. And we thought space slugs were scarey! 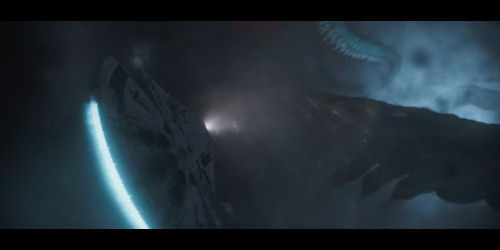 Has this 2:44 of quick cut video been enough to sate your curiousity? If it hasn't you'll just have to cross your legs because the toys from the next chapter of the Star Wars franchise officially hit shelves on April 20th. This gives you a whole five weeks to figure out where they fit before the movies hits theatres on May 25th.

Then we'll be back with our How It All Clicks Together - Part III. Until then, clear skies!
SEND