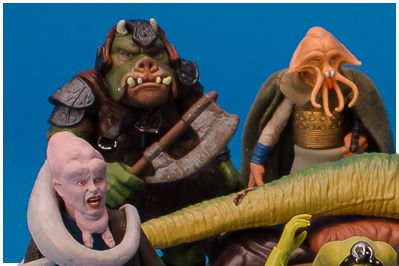 Return of the Jedi
Repaints aside, the VC21 Gamorrean Guard from The Vintage collection is only the third 3 3/4-inch action figure produced of one of the most popular creatures in Return Of The Jedi, and hands down, this one is the best of the three. For the first time we were offered a Gamorrean with a removable helmet, a fun fur loin cloth and enough weapons to army build. As such, this figure would never stay on the peg for very long, even when it was repacked in future assortments.