Following the tight lips and NDAs that made up the 2015 International Toy Fair and the sparse announcements made at Star Wars Celebration Anaheim, Collectors were certain that all would be revealed at the 2015 San Diego Comic-Con. We scoured the entire event to gather all the Star Wars collectible news we could and we photographed everything in front of us. With the countdown to The Force Awakens entering its final six months, the excitement on the floor was palpable. Despite their inability to discuss the products being released on September 4th, the licensees that are participating in the Force Friday event very obviously excited with what they have planned and that is very reassuring.

The annual Hasbro Panel is always a good show, and this year was no different. Fans of The Black Series had plenty to be happy about - besides details and photos of upcoming figures, they also showed off a Massive 25-inch tall First Order TIE Fighter!. Get the complete panel details right here.

EFX Collectibles, Kotobukiya, Gentle Giant Ltd, Tamashii Nations, and Sideshow Collectibles each gave a quick presentation of what fans can expect in the coming months. No The Force Awakens items to be found, but that didn't mean there wasn't plenty of other items that grabbed our attention. Get the full report here.

Chewbacca get his own upcoming mini-series. Chewbacca #1 by Gerry Duggan and Phil Noto follows the wookiee and his sidekick Kara... read on!

Joe Quesada held his annual "Cup o' Joe" panel at the San Diego Comic-Con, and he had a couple announcements that should please Star Wars comic book fans. Follow this link for the full rundown.

ANOVOS
More From The Company That Gave Us Our First Product Reveal From The Force Awakens...

We paid a visit to our friends (and co-sponsors of our 2015 San Diego Comic-Con coverage) at ANOVOS to find many new items displayed including the just announced Shadow Trooper kit, Y-Wing Pilot helmet, Boba Fett helmet, Death Squad Commander helmet, and much more! Check out the full gallery right here.

BEAST KINGDOM
More Figures Revealed In One Of The Most Unique Star Wars Collections Ever Released!

Beast Kingdom's display revealed many more Star Wars Egg Attack figures than we saw back in our International Toy Fair coverage earlier this year, and we're pretty excited about what they have up their sleeves. Follow this link to check out this gallery showing off all the Star Wars stuff they had on display!

Disney Interactive shows off upcoming Star Wars games, figures and more offering us an awesome demo and a very detailed look at what you can expect to see very soon. Follow this link to find out more!

EFX COLLECTIBLES
One Of The Booths That Shined So Brightly In The Lucasfilm Pavilion!

Here is a gallery showing off everything in the EFX Collectibles booth in the Lucasfilm Pavilion. Click the thumbnails above to have a closer look at their display including the newly revealed bust display stands made to redefine replica helmet collections!

FUNKO
The Funko Booth Was All About The Exclusives

Funko's booth at the 2015 San Diego Comic-Con didn't have any new reveals, but they had a great display of all their SDCC exclusives. Click the thumbnails above to have a look!

We took some time to go back to Gentle Giant's 2015 San Diego Comic-Con booth and get better aquatinted with all the new Mini Busts and statues. Follow this link to give them all a spin with this turn around gallery featuring the Zam Wessel and Sandtrooper statues, and the new Darth Vader, Luke Skywalker, Han Solo, Biker Scout, Commander Faie, and Emperor Palpatine Mini Busts!

Wednesday: A proper Look At The Gentle Giant Ltd. Booth

Here's a more thorough look at the Gentle Giant booth.

Take a look at our quick sneak peek gallery of the Gentle Giant booth, taken the moment we hit the show floor.

As 2015 San Diego Comic-Con's Saturday came to a close, we met up with the team at Hasbro to shoot full turn arounds of all the new reveals and to discuss the product lines. All the images from this shoot can be found here in this gallery and an overview of the discussion can be found here.

As they often do each year, Hasbro held back from revealing everything they had until Friday, which is traditionally Star Wars Day at the San Diego Comic-Con. It was quite the big unveiling this year - you won't want to miss the full gallery!

The Hasbro booth had plenty to scope out, though not everything had yet been revealed for Preview Night. Check out what was on display.

In the early morning before the doors were open at the 2015 San Diego Comic-Con, we optimized on an opportunity to reshoot Hot Toys' 1/6 scale TIE Fighter and Millennium Falcon Cockpits without the troublesome reflections. Click the thumbnails above for a clearer look at these two stunning additions to what may very well be our favorite series being offered these days!

The Hot Toys display at the Sideshow Collectibles booth at the 2015 San Diego Comic-Con was spectacular. Not only did they have the Millennium Falcon Cockpit we've all been drooling over, they also revealed the 1/6 scale Stormtrooper Luke Skywalker, A New Hope Princess Leia, Return Of The Jedi, 1/4 scale Stormtrooper, and the mindbogglingly monolithic 1/6 scale TIE Fighter! Click the thumbnails above for a closer look!

Kotobukiya's 2015 San Diego Comic-Con display featured the first appearance of the fully painted AT-AT Driver ARTFX+ model kit. Click the images above to check out all the Star Wars products they had at their booth.

Follow this link to check out the LEGO The Force Awakens First Order Stormtrooper Buildable Figure from LEGO!

Friday: A Look At The LEGO Booth

LEGO's booth at the 2015 San Diego Comic-Con had some new stuff not previously displayed including the Jango Fett and Commander Cody Buildable figures as well as the new (or just newly packaged) Sith Infiltrator. Click the thumbnails above to have a closer look.

The 2015 San Diego Comic-Con Lucasfilm Pavilion put many licensees together in one convenient location to allow attendees a one-stop location between Hasbro, Mattel, and LEGO to feel the Force. Follow this link to check out this mega-gallery featuring the wares being offered by Her Universe, jakks Pacific, Uncle Milton, Nixon, We Love Fine, (one of our two event sponsors) Topps, and many more!

Located in one of the showcases in Mattel's 2015 San Diego Comic-Con pavilion attendees could find all the latest character cars, collector cars, and the new Geonosis playset. Click the thumbnails above to check out all the new cars!

SIDESHOW COLLECTIBLES
The Second Age Of Sideshow's Evolution Is Here!

Compared to some of the displays from previous years, Sideshow Collectibles' 2015 San Diego Comic-Con display wasn't as large as you may have expected, but that doesn't mean there wasn't a lot of amazing products on display including product reveals of the new Darth Maul, R2-Q5 Imperial Astromech Droid, and AT-AT Driver Sixth Scale figures and the quarter scale Ralph McQuarrie Concept Boba Fett statue. Click the thumbnails above to have a look!

Hidden behind closed doors at Toy Fair last February, we weren't able to speak about this innovative product, but now that Spin Master has displayed their Legendary Yoda publicly at their booth at the 2015 San Diego Comic-Con we can finally express our thoughts. In short, we love it and you might love it too. Click the thumbnails above to see it for yourself.

TAMASHII NATIONS
With The Addition Of The Ashigaru Royal Guard, There May Be No Stopping The Movie Realization Line!

The Movie Realization Ashigaru Royal Guard was on display in the Bluefin Media / Tamashii Nations booth at the 2015 San Diego Comic-Con. Placed in a case with the already revealed Darth Vader, Stormtrooper, and Sandtrooper figures, the fourth addition to this already exciting line does nothing but make us want them all more! Click the thumbnails to see all of them for yourself.

TOPPS
There from the beginning, and ready to usher us into the third generation of Star Wars

Even before Kenner had products on the shelf, Topps helped fuel the Force in 1977, and now 38 years after the fact, one of our two event sponsors is keeping the fire bright with brand new (and pretty dang cool) offerings! Cick the thumbnails above to check out their display!

WORLD OF 3A
ThreeA Feels The Force... Sort Of.

While we're not entirely certain whether ThreeA's Lost Star Warrior TK designs are officially licensed or not, but one thing is certain, they are very cool! Follow this link to check out the Star Wars related section of the World of 3A booth. 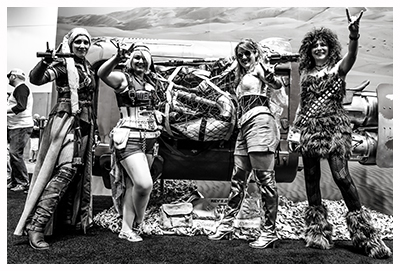