Ultarama Weekly Challenge 7
Posted by Curto on May 13, 2007 at 04:52 PM CST
Looking for a ultra-cool way to display your action figures? Then look no further than the Ultarama Display System, which can not only hold dozens of your favorite Star Wars figures (both vintage and modern), but can also be expanded upon with additional systems.

For years, Rebelscum's own Ultarama Diorama Displays Page has been THE place to get all the details on the Ultarama system, and also pick up tips on how to customize your own.

Now we're giving you a chance to win one of these for your own display! Rebelscum is teaming up with Ultarama to give one of our lucky readers a chance to win an Ultarama Display System of their very own!

But rather than simply entering your name into the random drawing, we're going to make you work a little bit to qualify for the drawing. In the photo below, you will see 30 different Star Wars action figures on display (30 figures for the 30th anniversary, get it?). If you can identify all 30 figures, then you qualify! Spelling is also not important, but it helps. 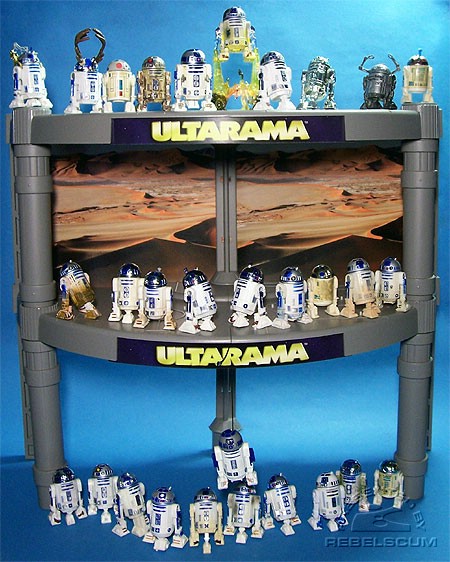 IMPORTANT RULE CHANGE
Note that you MUST correctly identify the line the figure is from to win! Since this month kicks off the 30th anniversary of Star Wars celebration, we've gone and added a theme to this week's contest. You'll need to identify the correct line the figure originally was released in (Vintage, POTF2, POTJ, etc.) Good luck!

If you need a little extra help in identifying any of the 30 figures, then be sure to look though Rebelscum's Photo Archive, where you'll find it.

When you think you have them all pegged, send an email to ultarama@rebelscum.com with your name, address, and your list.

The winner will be selected via a random drawing on Sunday, May 20th. Good luck!

UPDATE!
Now that the contest is over, here are the figure shown above: