LEGO: 5005376 LEGO Star Wars Anniversary Pod Re-Offer
Posted by Jeremy on March 1, 2018 at 01:38 PM CST
The promotional set that got advertised, hyped and cancelled has risen from the ashes in a surprise move only days after speculation arose that it would never see the light of day.

In a timely surprise move, LEGO has put the 5005376 LEGO Star Wars Anniversary Pod back on the table. The latest events calendar for US stores has this clamshell copy of the Tantive IV being available with $60 or more purchases of LEGO Star Wars products while in a LEGO brand store between April 13th and May 3rd.

It is interesting that the offer ends the day before May The 4th Be With You Day. 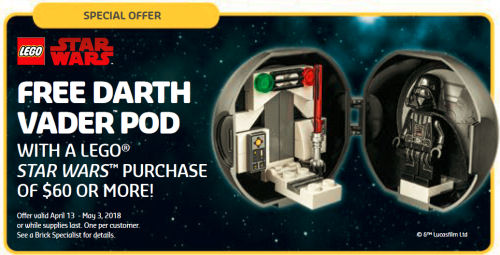 It is not yet know if this promotion will reach LEGOLAND and Certified Stores, nor if it will be run outside of the United States either.

This small build has had an interesting ride so far. Initially offered as LEGO brand store freebie with a $60 purchase between December 15th and January 14th in the US, or with a 55 purchase from December 18th, 2017 to January 31st, 2018 in Europe, it was summarily cancelled with LEGO citing quality control issues as the reason. The set was largely forgotten about it unil now.

If you've been on the bench about buying some LEGO Star Wars sets then perhaps now is the time to get comfortable, and hold off until late April. By which time the new Solo sets will be on listed on LEGOshop.com and available to order.
SEND