LEGO: Darth Vader Pod DOA?
Posted by Jeremy on February 27, 2018 at 02:48 PM CST
The mystery that surrounds the cancellation of the 5005376 LEGO Star Wars Anniversary Pod, which was due to come out December 2017, is hardly one of legends. There aren't any conspiracy theorists pointing to secret sound stages in Burbank, unknown lights in the sky or mysterious shadows on the grassy knoll. 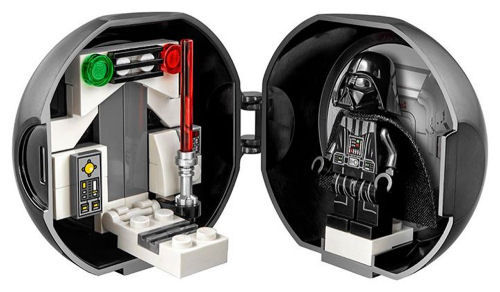 Or are there? Could there be more to its sudden and shrouded demise than LEGO has told us?

To this date all that LEGO has stated is that "We have to inform that as part of our internal quality screening process, we have found that the Star Wars Metalized Pod 5005376 does not meet our strict standards. As you know, we take the quality and safety of our products extremely seriously, and so out of an abundance of caution we have decided not to launch the Star Wars Pod." but Ace Kim, webmaster at FBTB.net, thinks that the cover up runs deep and in a recent post he explains his thoughts.

"So heres my theory: Hasbro thought LEGO was violating a licensing agreement between it and Lucasfilm, and issued a cease and desist order against distributing the Vader pod toy."

It is true that the two companies exist in a competitive industry that is suffering at the moment, and jealously guard the edges of their license with Disney Lucasfilm, but could a number of disagreements that span a decade really have come to head over a free Star Wars toy? Ace thinks so, and cites a recent Hasbro toy as the point of conflict as well as reminding readers that LEGO and Hasbro have gone head-to-head over a number of potentially infringing products in the past.

It's an interesting blog post, to be sure, be remember the caveat while you're reading it: "allegedly"
SEND