LEGO: Darth Vader Pod Promotion
Posted by Jeremy on November 1, 2017 at 08:22 PM CST
Starting from December 15th and running to January 14th - or while stocks last - anyone making a single LEGO Star Wars purchase of US$60 or more at a brand store or online (US only so far) will receive a free Darth Vader Pod. 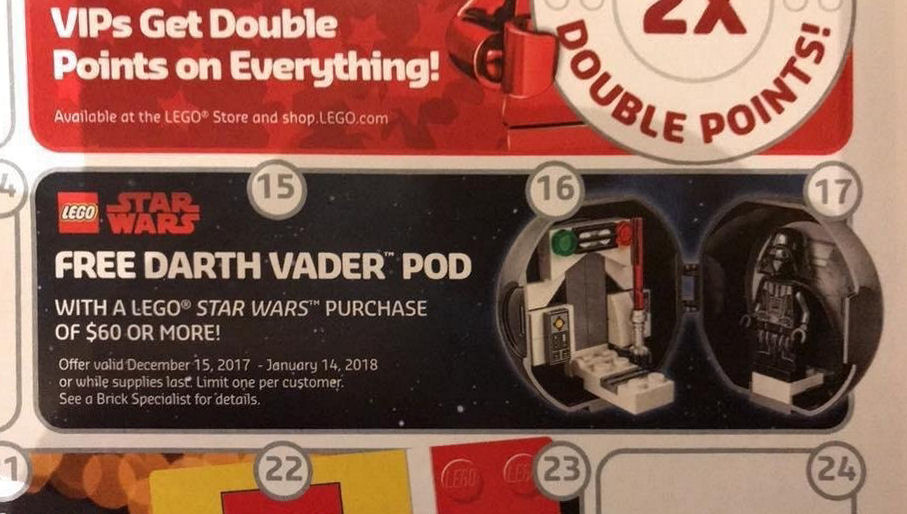 Those with a keen eye will note that the bricks in the front half of the clamshell look particularly Tantive IV-esque, as does the sticker behind the Darth Vader minifig.

LEGO news site The Brick Show points out that there have been other iterations of these LEGO pods:

It is also worth noting that on December 8th, 9th and 10th there is a double VIP points to offer. Wouldn't it be nice if LEGO had 75192 UCS Millennium Falcon available for order?

And while all these greatness is still a month away it does give us something to get excited about while we wait for the November calendar to make an appearance.

UPDATE: German language site Promobricks.de has received confirmation that the Darth Vader Pod will be available at LEGO brand stores in Germany with LEGO Star Wars
purchases over 55 between December 18th, 2017 and January 31st, 2018. Promobricks is also able to inform that the official number and name of the set is 5005376 LEGO Star Wars Anniversary Pod.
SEND