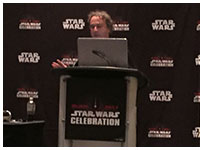 Broken into five parts, Gus began the panel by discussing his objectives, which included demystifying advanced Star Wars collecting with the declaration that anyone can do it, although it takes time and a lot of effort, but that it does not require deep pockets or a time machine!

Requiring research, friendships and patience, the main purpose of the panel was for Gus to share what he's learned along the way.

Gus provided some background as to where it all started for him, in a pre-Star Wars world beginning with baseball cards, where he would find creative ways to find cards from before his time. He also collected coins where he learned about the importance of condition, as well as action figures such as Evel Knievel, Aquaman and G.I. Joe.

Once Star Wars came along, Gus began collecting Topps' Blue Series trading cards before moving onto the action figures, starting with the Early Bird Certificate Package, where Kenner cleverly sold kids on the concept of a cardboard stand-in in 1977. In the period between 1977 & 1978, it was actually possible to be a completist, even when taking into account other collectibles such as comics, magazines, puzzles and food items!

Fast-forward several years and Gus spoke about life happening, starting with college and then moving away from home for grad school and his career, including permanently relocating from New Jersey to Seattle.

With the Star Wars renaissance that began in the early 90s following the release of Timothy Zahn's Thrawn trilogy, the Dark Empire comic series, Steve Sansweet's Star Wars: From Concept to Screen Collectible and the Star Wars newsgroup on the Internet, Gus became a born-again collector. Having retrieved his original action figures, he posted to the newsgroup for advice on getting started and thanks to the permanence of Usenet, was even able to recover the message he posted on April 1, 1993!

Before eBay, Toy Shop magazine was the marketplace for toys, featuring sellers from all over the world that enabled Gus and collectors like him to learn what was available, understand market prices and hear about local toy shows.

Moving onto posting ads in the newspaper, Gus was subsequently exposed to new things such as Don Post masks, ceramics, the Micro Collection, and was able to pick up loose toys as well as those that were still boxed or carded and also meet other collectors along the way. Working on a shoestring budget, Gus was able to sell and trade duplicates as well as be inspired to find other creative ways to fund an expensive habit.

When it comes to money and collecting, everyone has a budget, and Gus stressed that life needs to come first, so be sure to pay the rent and feed you and any family members! Budgets teach collectors about scarcity and frugality, and many collectors will continually be pruning their collection. Dealing can make collecting more affordable, and Gus also talked about knowing when to splurge, citing the example of when he purchased his rocket-firing Boba Fett prototype in 1994 for $3,000.

Networking with other collectors can be crucial, and Gus pointed out that the generation who grew-up with Star Wars were also the first to be active on the Internet. Further technological advancements included universal access to broadcast media, being connected globally with like-minded specialists, all of which allowed the community to uncover information that was previously impossible to assemble from expert sources.

Gus then moved on to talk about sharing information with the community, referencing Martin Thurn's The Star Wars Collector fanzine, as well as writing articles himself for the likes of Star Wars Galaxy Collector, Action Figure News and Starwars.com. He also talked about the fallacy of collecting in isolation and stated that most advanced collectors help each other, contrary to popular opinion.

Over the years, Gus has taken roadtrips to toy shows in Portland, Vancouver, San Francisco and Los Angeles, and traveled all over the world, including trips to Europe and Australia where he met the Tasmanian collecting club that was the inspiration for starting his own group in Seattle.

Created in 1994, SARLACC (Seattle ARea Lucasfilm Artifact Collectors Club) spans all levels and interests with a wide demographic and is the longest running Star Wars collecting club in the US.

Moving on, Gus then spoke about The Star Wars Collectors Archive, the first Star Wars collecting website on the Internet, which was originally about everything in collecting, but ultimately grew into a virtual museum of rare and unusual items, working on the principle that the community could build the best museum in the world rather than a single collection. Over the years, the archive has changed and evolved, popularizing areas like Star Wars toy prototypes.

This interest in prototypes led to visits to Kenner's home in Cincinnati, where Gus met many amazing Kenner people, something that collectors had typically not done before, and allowing for the discovery of many previously unknown things.

Another aspect of Gus' traveling was visiting locations used during the filming of Star Wars, where he found that crew had left behind props and set dressing once shooting had been completed.

Among the many items in Gus' collection, the original Death Star has to be one-of, if not, THE coolest pieces that he owns (my words), and the story behind him possessing it is one that needs to be heard from Gus himself!

As previously mentioned, Gus has been involved in the Collecting Track since 1999, and it has been a part of all twelve Star Wars Celebrations, and in addition to the panels are the collectors lounge, displays, awards, giveaways, publications and a swap meet among other things.

When it came to finding a place to display his collection, Gus and his wife Pam were very particular about what they wanted, needing a place to put the Death Star, as well as wanting eight dedicated rooms for his Star Wars pieces and plenty of wall space. How to display was another consideration, with Gus using a local plastics shop for custom display cases, museum framing and also IKEA for shelving.

Over the years, Gus has discovered new areas of collecting that few have explored, including cereal boxes, cast and crew items, record awards and yearbooks, and while some have become highly sought after, others haven't, but at the end of the day, that shouldn't factor into your decision to collect.

Original props and costumes were another area that Gus moved onto, after he began being offered props like masks and blasters, and he was surprised that the items were still around. Networking with people who worked on the films, he also met with other collectors who were part of a new like-minded generation that grew up with Star Wars.

The next subject that Gus discussed was adapting to change, where he talked about teaming up with friends to hunt for rare items, with recent large finds including the Worldwide Mint, Osborne Coin and toy vehicle patterns. He went on to point out that while the market has changed, some collectors haven't, and that while prices shift over time, big money, social media and new perspectives can also have an impact.

Other changes come from people's lives getting busy with careers, relationships and family, but that doesn't mean you can't still be an active collector. Nevertheless, tastes change, and sometimes you might decide to free up some space and funds for new areas, and that changing your focus can help to stay inspired. While Gus and Pam added six more rooms, more wall space and storage, you may need to explore alternative ways to grow!

Another way that Gus has been able to share information in new ways has been by filling gaps in books that collectors want to see. Collaborating with Duncan Jenkins, Gus has co-written comprehensive guides the way they would want it, covering toy prototypes, cast and crew items and the Micro Collection.

In 2013, the International Collectors Event was held in Seattle, with collectors coming from all over the world to tour homes and collections and engage in activities and parties. In addition to a roadtrip to Star Wars shops in the area, the 150 participants also got to see a screening of the original Return of the Jedi print.

Gus brought the panel to a close with the following conclusions:

When it comes to friends, Gus made the following points:

The Star Tot handed out to attendees of this panel was the Rebel Commando, which was sponsored by Chris and Aimee Botkins.
SEND