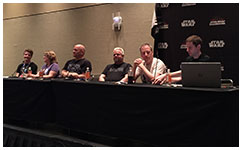 History & Evolution was the first topic covered in the panel, and discussed Toy Shop magazine, individual mailing lists and the trading of VHS tapes, which enabled collectors in the mid-80s to early 90s to learn what items were out there.

Following the emergence of the Internet, collectors turned to Usenet, forums, websites and blogs to learn more. With web-based forums, communities were established, history of the many items were cataloged and easily searchable. In the early days however, it was slow-paced, posting pictures was not easy, and there was also the issue of lurkers.

With the advent of Facebook, Twitter, Instagram and YouTube, the Social Media Revolution began, which brought with it an increase in speed of information, the platforms are convenient and simple, it allows for direct contact and an opportunity to meet other collectors, as well as receive alerts to scams.

However, it also had its disadvantages, including a lack of permanence of discussions, difficulty in searching for earlier threads, created ego-driven collecting and a price explosion, allowed for discussions to get buried and also increased a wealth of misinformation.

The next topic was Networking Tips, which comprised meeting and communicating with others and recognizing that collectors are a vital source of information, broadcasting wants and interests, learning what others collect, realizing that helping other collectors will often allow you to help yourself, and reaching the conclusion that Facebook has become the dominant collecting forum.

When it comes to networking opportunities, it was remarked that they often happen when you least expect it, with non-Star Wars social events, waiting in line for panels and Force Friday all given as examples, while Chris Logli spoke of one-such encounter at Huntington Beach Pier!

Content creators, new media and the new generation were all provided as social media influences, while conventions provide a rich source of opportunities when hosting a club table, and engaging in both panel-line and after hours interactions.

Collecting Clubs was the next area of discussion, covering pre-existing groups such as SARLACC, the Empire State Star Wars Collecting Club and many others, and the benefits of joining, while starting your own club was also encouraged.

The final subject of the panel looked at the opportunities for networking at Star Wars Celebration, and included the Collecting Track panels, the Collectors' Social Room, swag trading, the Collectors' Swap meet, the collecting clubs and sites with booths at the event as well as connecting with others at parties and meet-ups.

8D8 was the Star Tot given out at this panel, sponsored by James Simkins.
SEND